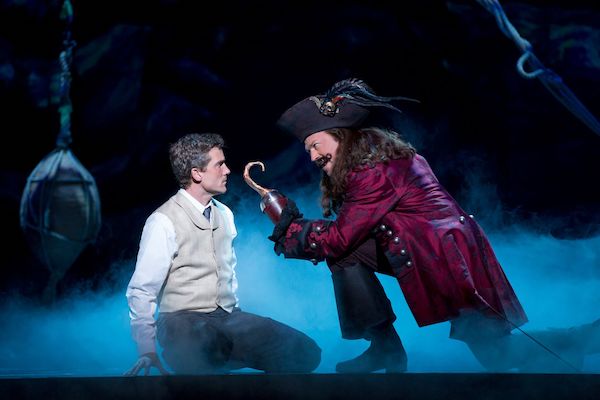 Peter Pan, the story of a boy who wouldn't grow up, was created by Scottish playwright J.M. Barrie in 1904 and has delighted children and adults worldwide for more than a century through countless versions on the stage and screen. The story behind this story, however, didn't really come to light until the 1998 play The Man Who Was Peter Pan by Alan Knee, which inspired the 2004 film Finding Neverland, which in turn inspired the 2012 musical by the same name.

Finding Neverland made its St. Louis debut last week at the Fabulous Fox on its first National tour, bringing a heaping dose of family-friendly inspiration and imagination (and a bit of schmaltz) in telling the story of Barrie's most renowned work. While Peter Pan's directions to Neverland are "second star to the right, and straight on till morning," Barrie's own path to finding Neverland was inspired by his relationship with a widow, Sylvia Llewelyn Davies, and her young sons.

As the show opens, Barrie, played with childlike wonder and zest by Kevin Kern, is enjoying a rare sunny day in Kensington Gardens in turn-of-the-century London. Wracking his brain to come up with a new play for his producer, Charles Frohman (played by the comedic Tom Hewitt), he's only able to rehash old ideas from past plays. Inspiration comes serendipitously in the form of Sylvia's boys: George, Jack, Michael and, of course, Peter. A rotating cast of fine young actors plays the Davies brothers.

George, Jack and Michael romp around the park playing pirates, much to Barrie's delight and fascination -- though he becomes even more fixated on young Peter (played on opening night by the excellent Eli Tokash), who seems to have lost his desire for imaginative games following the recent death of his father. Barrie also takes an instant liking to Sylvia, played poignantly by Christine Dwyer. Being a married man, however, the two keep their relationship platonic, if not a bit flirtatious. Together, they rekindle Peter's spark, as well as their own, in the catchy, pop-driven number "Believe."

Complicating things is Barrie's high-society wife, Mary, and Sylvia's dour mother, Mrs. du Maurier, neither of whom approve of the pair's budding friendship. Mary inevitably walks away from her husband, not content to play second fiddle, while Mrs. du Maurier tries to protect her daughter and grandchildren by all but forbidding them to spend more time with the frivolous Barrie.

Inspired by his interactions with the family, however, Barrie begins to create the fantasy world of Neverland. The most fun moments of this show are those that reveal the origins of some of Peter Pan's iconic imagery. The reflection of a spoon on the wall at a dinner party become's Tinkerbell's light; the curve of Charles Frohman's cane as he warns Barrie that the "clock is ticking" becomes Captain Hook's famous hook-hand.

Peter Pan's characters, too, are drawn directly from Barrie's relationships with the people in his life. Yet, while he bestows his title character with young Peter's name, it becomes apparent that "the boy who wouldn't grow up" is really a reflection of Barrie himself. When he shares his new vision with Frohman at the theater, the producer balks and rolls his eyes, declaring, "A play for children?" Barrie responds prophetically, "It's not just a play for children -- it's a play for everyone. We all have a child inside us."

As Act One draws to a close, Barrie and retreats deeper and deeper into his imagination, reflected in the four-part "Circus of Your Mind," the most complex and layered of the show's tunes by Gary Barlow and Eliot Kennedy, as the legendary Captain Hook emerges as Barrie's own "darker side."

In Act Two, Frohman's theatre company prepares to perform Peter Pan, feeling very out of sorts with their highly unconventional new roles. The Davies brothers are on hand to inspire and provide a child's-eye view of Barrie's vision of Neverland.

Now single, Barrie's friendship with Sylvia quickly deepens into something more, becoming fully realized in the sugary ballad, "What You Mean to Me," as the couple's shadows dance along, projected on the wall behind them. Kern and Dwyer have undeniable chemistry and harmonize beautifully, making this overly-sentimental moment bearable.

Their blooming romance is cut short, however, by the growing frequency of Sylvia's deep and foreboding cough. The realization of Barrie's masterwork coincides with the loss of his new love in a beautifully executed sequence that evokes a full range of emotions, bringing deeper meaning to the show's title.

Vivid and quickly morphing set designs by Scott Pask bring Edwardian era London to life in every scene, while unique projection design by Jon Driscoll, coupled with lighting effects by Kenneth Posner inject the show with a touch of Peter Pan magic, particularly in the dazzling finale.

Finding Neverland is an inspiring story of life, death, love and the power of imagination, loosely based on J.M. Barrie's real-life creation of his greatest masterpiece and those who inspired it. While the story could have delved deeper into the darker and more complex aspects of these relationships, as well as the work they produced, it treads more on the surface, making it clear that the producers, along with writer James Graham and Director Diane Paulus, were going for something with a broader appeal.

While not necessarily groundbreaking in its adaptation, Finding Neverland is an uplifting show meant to please Broadway fans of all ages. As Barrie's character declares, "Shouldn't theatre be for everyone? The young and the young at heart?"

Finding Neverland continues at the Fabulous Fox through December 18.