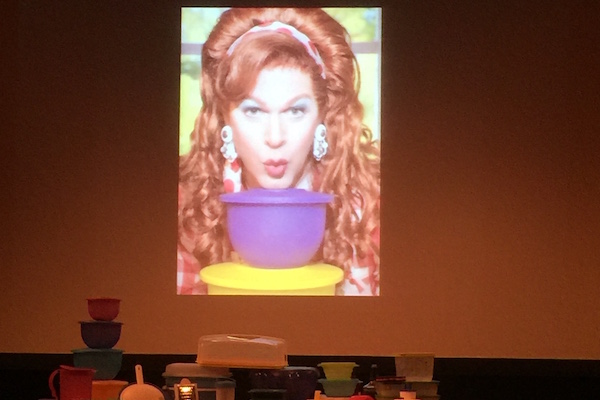 There's one thing that you need to understand before making your reservation for Dixie's Tupperware Party. You see, while Dixie Longate is delightfully conversational and perky girl who could probably chat you up on most any topic, this is still a Tupperware party and a girl has a job to do. Dixie started selling the clever and fantastic plastic containers in 2001 and though she's not quite made it to top earner, it's easy to see why she's a star performer in the organization.

To begin with, she's warm, inviting, and as down-to-earth and friendly as she can be. Equally comfortable poking fun at herself or her audience, Dixie starts her party off by pouring a healthy serving of Jack Daniels into that legendary never-spill sippy cup. In addition to providing all the important details about the Tupperware product line, she's quick to offer helpful, lesser-known tips, like the fact that the cupcake side of the cake carrier is perfect for Jell-O shots.

As an attendee to her party, you're subject to, and sure to be entertained by, her constant patter, including deliciously catty commentary, suggestive and risqué humor, and wise cracks directed to certain audience members. She's never mean-spirited, and her uninformed assumptions are immediately relevant and humorous.

Dixie's ability to improvise on the fly is flat-out impressive, an unexpected highlight of the performance. Several of the funniest party moments are in direct response to audience participation, and Dixie instantly weaves it all together with an expert touch that will likely have tears of laughter running down your face. What she did with the idea of a "water salad" the night I attended was as sharply pointed as it was spot-on hilarious.

In the sense that it's as much performance as it is plastics, Dixie's Tupperware Party is also unlike any other home sales event you've ever attended. It's boozier, bawdier, and not suitable for work, but with more of a moral to the story than you might expect. Dixie has clearly lived a full life, one that includes three kids and a stint in jail. Though the evening zips by with joke after joke, the smaller more intimate and revealing moments remind you that behind the dazzling smile, Dixie is a person filled with fears, uncertainty, and fragility just like the rest of us.

Dixie also tells us the story of Brownie Wise, the woman who single-handedly invented the in-home sales party when she decided to demonstrate and sell Tupperware products by hosting get-togethers among her friends and their friends and neighbors. It's here that Dixie's positive message really shines through and you may find your heartstrings tugged by the true admiration and fondest the big haired, brightly costumed sales girl has for a woman she never met. There's an authentic emotion that shines through when Dixie softens her voice and let's us into her personal story, and Wise fits comfortably in the mentor matriarch role.

The story of Dixie Longate, a reformed mother and Tupperware party hostess from Mobile, Alabama, was written by Kriss Anderson and directed by Patrick Richwood, who keeps things moving at a frenetic pace that perfectly suits Dixie's hyper and excitable personality. The set, a glorious folding table, overfilled with shiny plastic products, is complemented by smart use of a projection screen and emphasized with lighting and sound by Richard Winkler and Christopher K. Bond, respectively. This is Dixie's show, however, and if you're open to her charms, you'll find her entirely captivating and devastatingly funny.

Like many performers, Dixie is big, brassy, and loud, with a biting wit and sense of humor that sheds laughter on life's darker moments. She can be a little too open and bawdy for some tastes, but her ribald humor is filled with humanity and the natural grace one learns after having picked one self up numerous times. Audience participation and interaction is encouraged, and you're welcome to bring in a beverage and sip along with Dixie. Please remember, however, that this is her show and treat the invitation with respect. Running commentary with friends and taking selfies during the show are never courteous theater behavior.

The Playhouse at Westport Plaza has reinvented itself as a home for smaller theater, often one-person and small cast touring shows delivered with professional panache and an emphasis on comedy. Dixie's Tupperware Party, running through December 18, 2016 isn't for everyone. But if you like your merchandising served with a generous helping of laughter, innuendo, and fun, you won't want to miss this show.