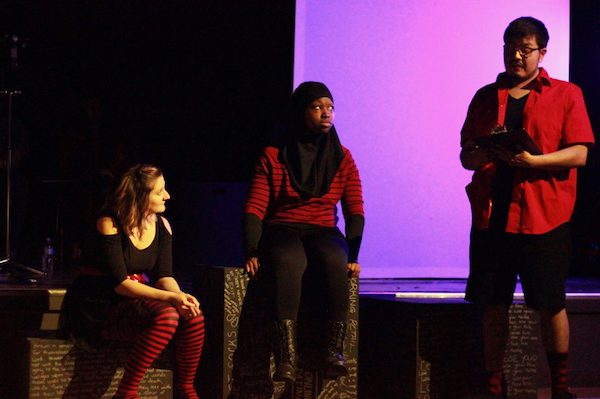 Go to 'Hell': Theatre Nuevo performs at the Chapel

Hell is many things to many people. To most of us Hell can be some unavoidable situation in this life: to my wife, driving across Italy without a GPS was Hell; so is turning left onto Manchester at rush hour. To those of a religious bent Hell involves an after-life. Dante's Hell had nine descending circles of torment; the Buddhist Hell has eight hot and eight cold horrible "Narakas"; the Mayan Xibalba was a subterranean city with many houses full of trials and tests.

Great playwrights have shown us Hell: To Sartre, Hell was other people as in No Exit; to Bernard Shaw, as in Don Juan in Hell, it was comfort and boredom without intellectual stimulation.

Theatre Nuevo is a smart young company now in its third season. They are presenting their version of Hell at the Chapel. This is a "devised" piece -- meaning it was developed as a collaborative effort among performers, designers, director, composer, and choreographer. The result is something of a scattershot. There are buckets of bright comedy and a number of strange, crisply executed dance vignettes. There is beautiful dramatic use of silhouette. There is much music and song. There are compelling moments of real human suffering.

The overall evening (a brief hour and a quarter) has a sense of randomness. But within that semi-chaos there are three central stories that do indeed have a sort of story arc:

These small tales are told with warmth and stark honesty and with wonderfully mature compassion.

Elizabeth van Pelt and Rahamses Galvan spice up the evening as a couple of demons who spend their time orienting new arrivals or dreaming up new torments or running a "Wheel of Torture" game show. Both are full of devilish energy. Miss Pelt makes a sexy, scampering imp, and Galvan is wonderfully agile -- even when he suddenly appears in the most remarkable fat-suit I ever saw.

Marcy Wiegert gets credit for the delightful costumes and Geoffrey Alexander did excellent work as choreographer. The set, by Max Viau, is simply a great black-board on the floor and three gray boxes-- all covered in hundreds of hand-written messages from the denizens of Hell. (When you arrive allow yourself time to read some of these treasures.) The Chapel has limited technical resources, but Gabe Taylor makes the most of them in his very effective lighting and sound.

The hard acoustics at the Chapel are not kind. They make some of the song lyrics difficult to follow. For the dialogue this difficulty is aggravated by the seating of audience on both sides of a long central playing area. Thus for nearly half the time a speaking actor has his back to half the audience. Not ideal.

But this is a minor flaw in an evening that is for the most part inventive, engaging and often moving.

Theatre Nuevo's Hell plays at the Chapel through January 29.