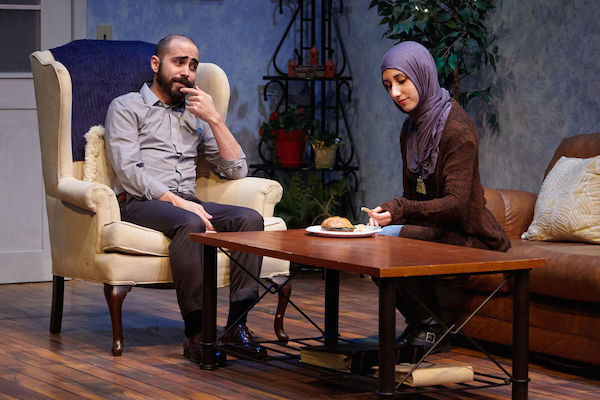 A young woman and recent immigrant to America who proudly displays a necklace of Iraq and the son of immigrants who purposefully downplays his religion and ethnicity are most decidedly an unlikely couple. Mustard Seed Theatre embraces this apparent dichotomy in their production of Yasmina's Necklace. The company has created an environment where similarity is subtly emphasized by design and cast the show with genuinely sympathetic actors.

Author and performance artist Rohina Malik was inspired to look to the Chicago's immigrant and refugee population and ask: what might happen if the son of immigrants met a proud female refugee? The result is Yasmina's Necklace, a contemporary love story brought to life in a compelling and satisfying production that artfully weaves multiple cultures connected through a common religion and universally shared values.

Sam and Yasmina are two attractive, young Muslim adults whose paths would likely never cross. Sam, named Abdul Samir at birth, is a divorced man working in the finance industry. A casual Muslim who questions his beliefs, he's all too aware that his given name may be hindering his success. Yasmina, a recent arrival to America, is an Iraqi refugee, artist, and political activist proud of her roots. A well-chaperoned date is arranged for the two by the local Imam at the request of Sam's parents. The parents and Yasmina's widowed father, along with the Imam, try to nudge the two together. Unfortunately, they don't seem to hit it off, although Sam appreciates Yasmina's paintings.

During their initial conversation, Sam learns that Yasmina wants to start a non-profit and suggests she contact his friend, a lawyer, for assistance. When he is compelled by the Imam to deliver the man's business card himself, Sam becomes more interested in helping with her cause. Slowly, the two find common ground and their attraction intensifies, but Yasmina is hesitant to start a relationship with Sam. She is still haunted by the scars of love and war she experienced in her homeland. Is it possible the two can breach their differences, let go of past emotional scars, and make a life together?

Parvuna Sulaiman and Adam Flores are imminently watchable and wonderfully well cast as Yasmina and Sam. The two bring sensitivity and depth to their roles, fearlessly exploring cultural differences and cautiously finding delight in their budding relationship. They have strong chemistry, aided by intelligent, articulate personalities. Additionally, the desire to connect with equal respect and affection is a welcome aspect of each character's personality. Sulaiman and Flores skillfully and effortlessly embody these traits.

Chuck Winning turns in one of his best performances as Sam's Arabic father Ali. Ali is amiable and dignified, but clearly a comfortable and well-adjusted American. Maritza Motta Gonzalez, as Sam's Puerto Rican mother Sara, is at times hilariously meddling and over-protective of her only child. Amro Salama, as Yasmina's widowed father Musa, is clearly concerned for his daughter's happiness and security. He wants her to have a bright future with a truly caring partner, and the bond between Salama and Sulaiman is palpable from the stage to the back row. Ethan Joel Isaac, as Amir, and Jaime Zayas, as Imam Rafi, provide additional context that adds significant detail to the story.

Director Deanna Jent once again shows insight and restraint, moving the story forward with motivated action and sharply defined characters. Malik's script, though a bit predictable in terms of the story arc, offers many lovely scenes for the ensemble and they flow together with ease. Each revelation unveils another facet of Yasmina and Sam's roots, reinforcing the idea that they both represent strong trees, an important theme that gains meaning throughout the show. Dent emphasizes the key themes without being heavy handed and ensures the romance has an opportunity to bloom naturally.

The show is filled with references to the traditions of Islam as well as Arabic and Hispanic culture. Kyra Bishop's spectacularly detailed set, created by scenic artist Emily Kay Rice, smartly reflects the families' commonalities. The painted archways at the back of the stage, evoking mid eastern architecture with an inspired use of glow-in-the-dark paint, are a singularly stunning and memorable touch that provides unexpected delight. The costumes by Jane Sullivan, props by Meg Brinkley, lighting by Michael Sullivan, and sound by Zoe Sullivan add texture and context, creating a world that's easily understood and accessible.

Yasmina's Necklace is a satisfying romance and an intimate look at the complexities of the Muslim American experience, particularly for recent non-white immigrants and their children. The story invites us in and provides the means to better understand this modern melting pot. The show is thoughtful and respectful, but most importantly, it is filled with hope and promise -- the ending scene brought tears of possibility to my eyes.

Mustard Seed Theatre has once again produced a thoroughly entertaining show that encourages audiences to broaden their perspective and to listen fully. Romantically realistic and uplifting, Yasmina's Necklace, running through February 12, 2017, is a touching and compelling light drama that embraces our common hopes, fears, and dreams with genuine warmth.