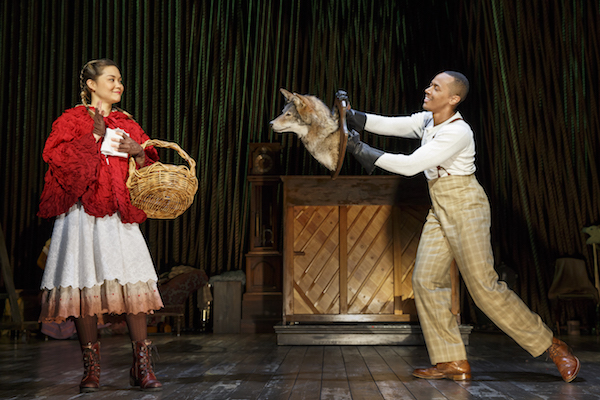 Fiasco's 'Into the Woods' makes a classic extraordinary

James Lapine and Stephen Sondheim's Into the Woods had its first production in 1986, and since then has been wildly successful, even making the cross-over into Hollywood with a film starring Meryl Streep as the Witch and Johnny Depp as the Wolf. Productions happen often in St. Louis; The Muny did a recent version with Heather Headley as the Witch. "New and fresh" aren't words theatre-goers  use to describe this oft-performed classic, but that is exactly what the Fiasco Theater production at the Peabody was: a re-imagined, refreshing glimpse at old, familiar characters and songs.

Fiasco Theater's Into the Woods had an Off-Broadway run from 2013-2015 and has been on tour since November of 2016. It played at the Peabody Opera House in St. Louis in mid-February. The marketing information for the show states, "This is Into the Woods as you've never seen it before!" and they're right. Co-directors Noah Brody and Ben Steinfeld have created a small, tightly-knit version of Woods with only ten players. These performers are quadruple-threats: they sing, dance, act, and play instruments, never leaving the stage for the whole of the performance.

Set designer Derek McLane strews the guts of a piano around and lighting designer Christopher Akerlind makes those guts look magical. The main set piece is a single piano in the middle of the stage, and there sits the music director and pianist Evan Rees. He is a part of this production, usually as the pianist, but sometimes as narrator. Or a cow. The other players move around him, gliding effortlessly in and out of different characters with rapid-fired lines strung with comedic timing.

This show is ow-my-face-hurts-from-laughing funny. The actors begin the show on stage; there is no curtain to separate them from the audience. They wear 19th-century underwear to start and as they move through the rigorous paces of the show, costume pieces fly on and off: a hat here, a bell there, a shawl, a jacket. Men flit from playing a prince to playing a wicked step-sister with ease and grace and hilarity. Philippe Arroyo's Jack and Milky White, played beautifully by Darick Pead, have a delicious bromance (is it a bromance if Milky White is a she?).

Yet, through all the merriment, the actors let the audience feel their characters' longing and pain, and deliver the powerful message Woods is meant to deliver: appreciate what you have and be careful what you wish for. They do this best through song. Lisa Helmi Johanson's "I Know Things Now," Stephanie Umoh's "Witch's Lament" and Arroyo's "Giants in the Sky" are captivating, haunting renditions of songs the audience knew well, sung as if being heard for the first time.

There is no weak link in this small band of actors; each dazzled in their roles. When they weren't center stage, they were playing an instrument to supplement the piano. Bonne Kramer's bassoon and the other instruments added such depth to the score, it sometimes sounded like there was a whole band in the pit. Many of these instruments were non-traditional, like a child's piano and a waterphone. Combining these contemporary sounds with classic melodies furthered the concept of the whole show: a perfect balance of fun and philosophy. Fiasco Theater's Into the Woods is an extraordinary interpretation of a classic.