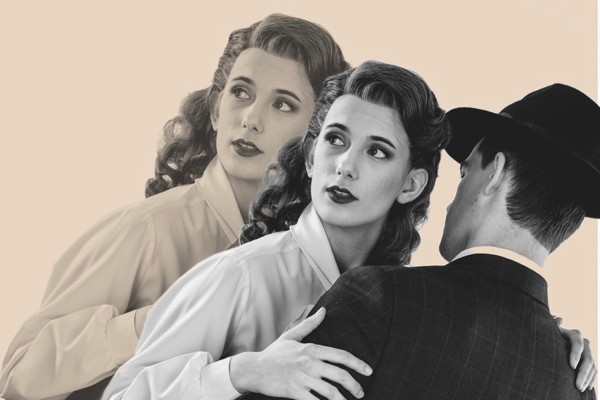 'The Philadelphia Story' is a splendid showcase for the Webster Conservatory

Philip Barry's most successful plays in the 1920s and '30s pictures life among the wealthy and fashionable. In The Philadelphia Story, a magazine writer and a photographer have been sent to cover a wedding in one of Philadelphia's old families. To complicate matters, this is the bride's second marriage, and her first husband is a neighbor who drops in now and then. Writing during the Depression, Barry has given the magazine writer some of the working class attitudes of the period. But his moral objections to wealth don't keep him from developing a crush on the bride. And the groom is a self-made man who has risen from coal miner to CEO. Barry gives them all lines that fit, but they tend to sparkling wit whenever appropriate.

It is this style of high comedy that the teachers at the Webster Conservatory have imparted to their students, who have learned it well, and director Tim Ocel has guided them in a polished production that is a delight to see and hear.

As Tracy, the bride, Libby Jasper is more than crush-worthy. Lucas Reilly's reporter manages to hang on to his self-control when dazzled by wealth and Tracy, while his photographer partner played by Leah Russell slyly underplays her challenged emotions. Michael Ferguson nicely preserves physical and vocal remnants of the working-class origins of the groom. As Tracy's ex, Andrew Oppmann maintains his cool in awkward situations, though I wouldn't have minded a little more charm. Harrison Farmer efficiently arranges things as the brother of the bride.

As college students playing middle age, Lana Dvorak is especially successful as Tracy's mother, and Kai Klose makes a proper paterfamilias as her father, working his way back into the family's good graces. Jacob Cange faces a tougher challenge as the mother's brother Uncle Willie, hanging on to his youthful exuberance. Jarris Williams appears briefly as a minister. At the other age extreme, Becca Russell gets help playing Tracy's younger sister from her own energy and from pigtails given her by wig and makeup designer Brielle Creaser and her costume from Elizabeth Swanson, who has given the others in the cast the loveliest of the period's flowing styles. Matt Billings, Justin Duhon, Delany Piggins and Lauren Sprague are impeccably correct as butler, footman, and maids. Mitchell Holsclaw is a folksy night watchman.

Kylee Loera's lights follow the hours of the day. Marion Ayers designed the period-appropriate sound, and Jason James's set at the Conservatory is in the best of taste.

Continuing through Sunday, February 26, The Philadelphia Story in the studio theatre at the Loretto-Hilton Center, charms and delights for a lovely couple of hours.