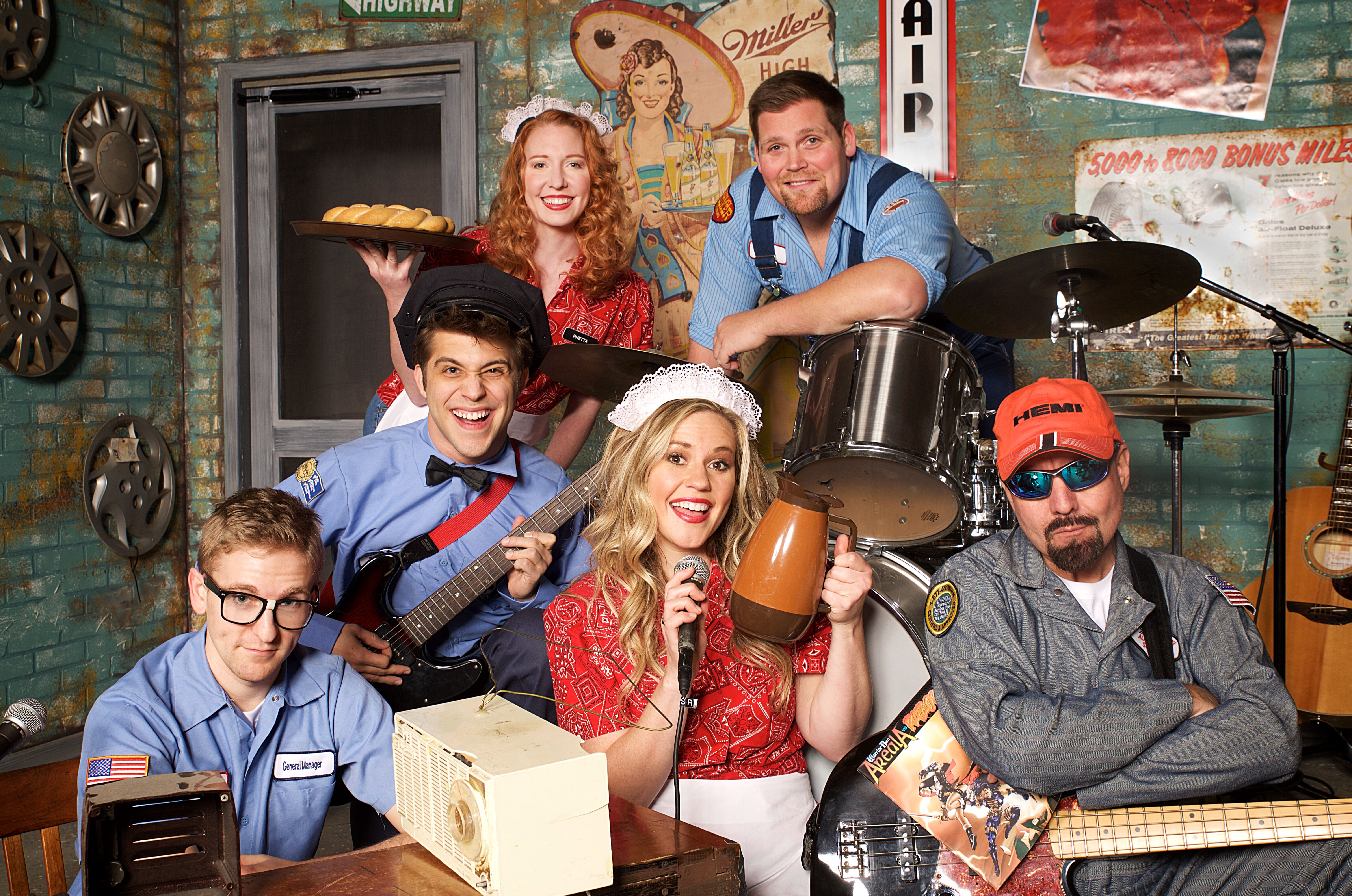 'Pump Boys and Dinettes' is pure fun, wrapped in humor and delivered with a twang

Brimming with good humor, flirtation, and catchy songs that sound familiar even though they were written for the show, Pump Boys and Dinettes is a lighthearted musical with an emphasis on folksy comedy and romantic appeal. The original songs are mostly up tempo, with a few ballads sprinkled along the way to vary the pace and tone of the show.

The Pump Boys are a bunch of guys who work together at a service station during the day and fill the place with fans and music at night, a true "garage band," if you'll allow the pun. They're backed up by the Dinettes, a pair of sisters who run the Double Cup café and are singers and kitchen percussionists. Together the four guys and two girls bop, harmonize, and gently poke fun at each other while performing a solid set of rockabilly and country songs.

Jim and LM own the Highway 57 service station and are the natural leaders of the group. They're portrayed as congenial diamonds in the rough. Chet Wollan, as Jim, and Brandon Fillette, as LM, are big hearted, welcoming types, and both have the ability to lead the band with confidence, though they bring distinctly different abilities and personalities to their characters. Wollan also casually serves as the narrator of the show, introducing the other actors and providing exposition and a little romantic gossip. Fillette is the music director of the show and plays the piano and a swinging accordion.

Guitarist Steven Romero Schaeffer, as Jackson, and bassist Ed Avila, as Eddie, round out the band. Avila doesn't sing as much as the other five, keeping his expression blank and his eyes hidden behind dark sunglasses the entire show. Still, the two have fun playing up their minor characters, creating a spirited dynamic in the band that spills over to their interactions with the Dinettes and audience. Candice Lively is the perky and completely infatuated Prudie Cup and Jessica Bradley is Rhetta, her older, wiser, but no less romantic sister. The two have an easy, friendly relationship and harmonize well. In fact, the two have such good chemistry that the somewhat remorseful ballad "Sisters" feels almost out of place in the show.

The set looks like the inside of a throwback diner and service station, there's even an old rotary dial phone that occasionally rings when Uncle bob calls to check on the repairs to his Winnebago. There's not much of a story here, more an on-going string of anecdotes and jokes that transition from song to song. The interaction between cast and audience is polished but relaxed, and everyone pokes good-natured fun at each other and their romantic exploits until it's time to close down for the night.

The show was nominated for five Tony awards, and the skillfully interwoven songs feature a wide variety of country styles, from swing to rockabilly and even a touch of rootsy folk music. There are also a few ballads, including the plaintive "Mawmaw," which add to the textural and musical variety of the show. "Highway 57," "Drinkin' Shoes," and "Mona" are solid numbers that would fit in on country and oldies stations. Rhetta's "Be Good or Be Gone" is a belted out, girl power-tinged song that's a little Bonnie Raitt, a little Carrie Underwood, with just a little edge thrown into the twang.

The pleasantly inoffensive musical, directed by Curt Wollan, is fast paced, breezing through twenty songs in a crisp hour and a half. The music, a little dancing, and a lot of gossipy chatter are all optimistic in nature, focused on personal relationships and getting along. It's a nice, nostalgic show, if essentially devoid of dramatic conflict, and an enjoyable evening of quality singing and playing. The effect is more music review than true musical, but the result is quality entertainment delivered with a smile.

One of the more unfortunate aspects of the show is that Pump Boys and Dinettes only runs through February 19, 2017 at the Playhouse at Westport Plaza. The cast is comprised of talented musicians who appear to be having as much fun as the crowds they play to and the songs are an enjoyable mix of country-infused tunes that swing along with an infectious beat. For those looking to escape the February blahs, this show is a lot of fun and an easy way to chase the winter blues away.