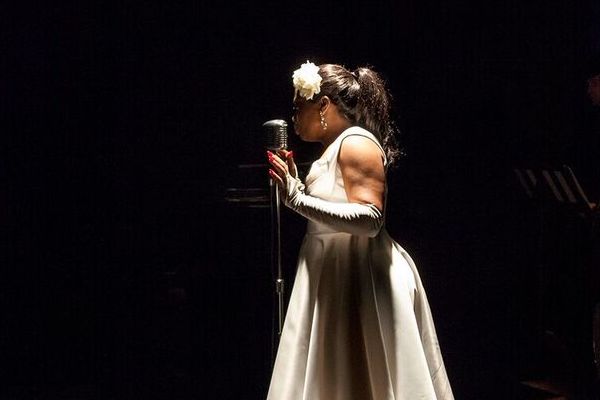 It is a rare feat when an actor can so totally lose their self in an historic figure that it makes you wish you had a better, deeper catalog of the original. Such is the case with Alexis J. Roston in Lady Day at Emerson's Bar & Grill. Her interpretation of Billie Holiday, the famed jazz singer and cabaret artist, is masterful. From her carefully nuanced singing and storytelling to her simple, elegant white dress and trademark gardenias, to her slurred words and mood swings, Roston conveys the soul and artifice of the tragically addicted Holiday late in her career.

A three-piece combo takes the stage and bandleader Jimmy Powers starts the evening off with a soft, up-tempo number before he welcomes the audience and calls Ms. Holiday onto the stage. Music director Abdul Hamid Royal plays Powers as a man whose patience for Holiday's behavior and addiction has worn thin, but he can't resist the musical high when she's performing. Royal is clearly more comfortable behind his keyboards, but does a nice job using expression and body language to convey much of the tension. Drummer Kaleb Kirby and bassist Benjamin Wheeler are solid and smooth as the rest of the trio, and though neither has any lines in the show each gets in a good solo or two while remaining background figures.

Roston is mesmerizing as Holiday, deftly moving through stories of abuse, rape, love, and prejudice in a voice completely reminiscent of Holiday. For a brief moment at the top of the show, I even wondered if she were lip-syncing. She isn't. She's simply that connected and accurate in her portrayal of the troubled and immeasurably talented jazz singer.  Following playwright Lanie Robertson's lead, Roston takes an honest, at times unflattering, approach to the singer's repartee and cravings as well. Lowering her voice, she draws us in with stories of segregation and the open, hateful prejudiced she experienced, particularly when touring with white bands such as Artie Shaw and his orchestra. Just as quickly, she turns to Powers and pleads for a little "moonlight," telegraphing her need for another fix without ever mentioning it by name.

Scenic designer Dunsi Dai transforms the intimate Kranzberg theater space into a smoky bar, without the smoke, circa 1959, just months before Holiday's untimely death at the age of 44. The space feels appropriately well worn and gritty, the atmosphere enhanced by low general lighting and pre-show cocktail service. In addition to her single microphone, Holiday has a small side table ready with a glass and a bottle of liquor, which she nearly polishes off during the show.

Director Leda Hoffman and Roston clearly work well together and every moment is memorable. The two ensure they move through the character's transitions recreating famous moments from the singer's career, including "Strange Fruit" and ending with a spotlight smartly recreating Holiday's trademark look. Dorothy Jones' costume design and Casey Hunter's sound design are elegant understated touches, while the lighting design by Patrick Huber faithfully references images and reports from Holiday's many performances.

Billie Holiday was a revelation, and a genius with phrasing and intonation. She made an immediate and lasting impression and has influenced generations of vocalists. Though her range was limited, she treated her voice like and instrument, carefully playing with the texture, phrasing, and notes and always maintaining her trademark tone. Roston captures her humor, passions, and incredible vocal interpretations in a spectacular production. Just as Holiday was contractually obliged to do, Roston ensures that her most well-known, commercially successful songs are in the set, including "What a Little Moonlight Can Do," "God Bless the Child," and "Strange Fruit."

Other lesser known songs highlight Holiday's virtuosity, and Roston shines on "Crazy He Calls Me," "Baby Doll," and "T'ain't Nobody's Biz-ness If I Do." The latter song is painfully accurate to watch, as Roston nods off in a drug-induced haze mid-song, one gloved sleeve rolled down revealing track marks. The moment is small, but communicates much about the downward spiral that would soon extinguish Holiday's talent.

Max & Louie Productions' Lady Day at Emerson's Bar and Grill runs through March 4, 2017 at the Kranzberg Arts Center. Alexis J. Roston immerses herself in the title role, and the one act, 15-song set is captivating and thoroughly satisfies as both theater and concert. Fans of Billie Holiday, jazz, and exceptional performances are in for a treat with this outstanding production.