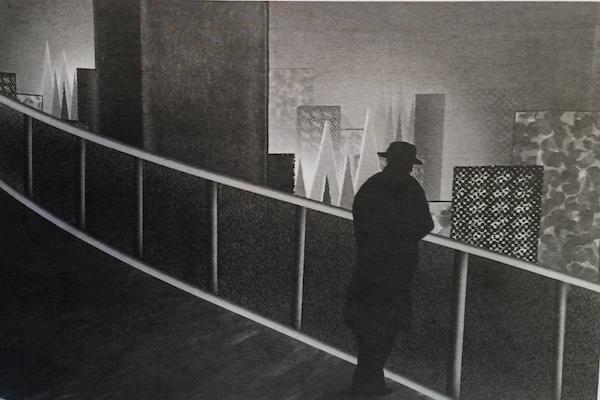 Arthur Miller's stirring tale A View from the Bridge is a complex and timely story. Set in Brooklyn in 1955, the show focuses on a family of legal immigrants and their efforts to assist distant family members who have entered the country illegally. The small family includes Eddie, his wife Beatrice, and their niece, Bea's sister's daughter Catherine.

Just like many of their neighbors, the family has been pressed to welcome near strangers into their home and to provide safe shelter from immigration authorities. Their undocumented visitors are Marco, a young man struggling to support his family back home, and Rodolpho, his handsome, single brother, who would like to stay in America. Eddie is quite protective of Catherine and, as the brothers get comfortable in their new home and Catherine and Rodolpho become romantically involved, he becomes increasingly agitated and suspicious of the men's motives. Though well intended, his distrust and personal conflict has tragic consequences.

Isaiah DiLorenzo and Emily Leidenfrost stand out as Eddie and Catherine. The dramatic tension in the script is carried, in large part, by the relationship between the two, and their performances felt motivated and raw. DiLorenzo's character struggles with his feelings for his niece and the actor expresses this without being too creepy. DiLorenzo also demonstrates commitment to the era and location through body language, attitude, and a reliably consistent accent.

Leidenfrost is sympathetic and genuinely confused; she wants to please her uncle but doesn't understand or even recognize his behavior. Her character shifts back and forth between the protected young girl she has been and the emerging independent woman she becomes. Leidenfrost handles the shifts well, there's authenticity in her pain and stubborn smarts in her rebellion.

Erin Struckhoff, as Eddie's wife Beatrice, Joe Ruskey and Dan Heise, as Marco and Rodolpho, and Sam Hack, as the lawyer Alfieri, also have some nice moments. Unfortunately, they don't have the sustained energy or emotional connection that's needed for this affecting and at times quite unsettling story.

The technical aspects of the show create the canvas for the story, but without the frills and effects of a theater with a large budget and crew. Set designer Steve Myers ensures that the spaces are well defined and the relative poverty of the family is evident but unspoken. Eric Kuhn provides convincing fight choreography for the important confrontation. Nathan Schroeder effectively lights the stage areas, helping to distinguish scene and location. The costumes by Julie Smailys reflect the era and status of the characters without distracting from the show, and director Joe Hanrahan's sound design is unobtrusive, with some interesting music selections for the pre-show and intermission.

From an overall perspective, Hanrahan appears to have a solid approach to the show's direction, characters, and tone; but the execution, like the accents, is quite uneven and at times too muddled to follow. Struckhoff plays a woman with fears she's afraid to voice, but her performance is uncharacteristically dull, lacking emotion or color. If this is an interpretive choice by the actor and director, more purpose and efficacy of action is needed. Hack delivers the exposition in a flat, dispassionate voice that never fully connects with the story. More variation, and perhaps starting his lines just as he's moving to his spot, will markedly improve the pacing and context of the show.

The scenes and action feel purposefully constructed and frame the story well. The characters are clear and distinct. But Hanrahan doesn't quite bring them all together with the necessary urgency and conviction. The actors also need to commit to the tension and conflict in the show. There are times during the performance when the lines feel recited rather than acted, which really pulls me out of the moment. The major transitions plod when they should be crisp and many of the secondary characters fail to coalesce in ways that successfully advance the story.

As a result, the show never seems to find the right pace or energy to convey Miller's dramatic and complex story. It's a shame, because the script is perceptive and relevant to contemporary audiences. Through scene and dialogue, Miller gives us a perspective on current events and the status of immigrants and refugees in America that draws from our shared and not so distant history, and can be traced to the country's founding.

A View from the Bridge running through March 5, 2017 is not Clayton Community Theatre's most successful production; it is, however, an interesting, thoughtfully produced story. The sub-context is key to the story arc and adds much to the conflict, but the questions on immigration -- the very realistic situation presented -- make a compelling story of its own. The show is relevant and timely, and audiences will likely appreciate Miller's engaging, if socially dated, insight into contemporary issues as reflected in this solid, but not stand out, production.