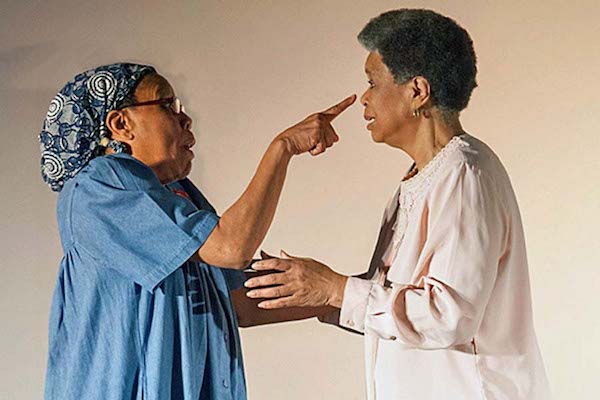 'BRIEFS: A Festival of Short LGBTQ Plays' gives a voice to emerging playwrights and artists

This coming weekend, March 9 through March 11, St. Louis audiences will have one last chance to catch Briefs: A Festival of Short LGBTQ Plays written and produced by and about the LGBTQ Allied community. The festival, which has announced this will be its final year in this format, is the brainchild of Joan Lipkin, the artist and activist behind That Uppity Theatre Company, and Darin Slyman, CEO of the Vital VOICE, a leading LGBTQ community magazine.

Subject matter varies from play to play, but the focus of the festival is sharing the stories of LGBTQ individuals through theater. There's no prescribed theme or agenda to the festival, which features a wide variety of relevant, high quality shows each year. The festival makes its political statement simply by promoting a platform focused on the many creative voices in the LGBTQ community. Year after year, there's always been a story or two that touches your heart, another few that generate tears of laughter, and a solid handful that thoughtfully and artistically explore life in the flyover region of the United States from the perspective of lesbian, gay, bisexual, transgender, and queer or questioning people.

During the six-year run, the Briefs festival has produced over 50 plays, with multiple premiere performances debuting each year. For the third year, the festival will include a production of the winning submission in the Ken Haller Playwriting Competition for LGBTQ and Allied Youth, Trial and Swear, by McKenzie Moser. John Schmidt, winner of the first year's competition, recalls how important the festival and community support he received was. "The Haller was a bookend for me in a lot of ways -- it marked the culmination of my college writing career and journey to coming out, recognizing and affirming my queer voice in a way no one had before, while also signaling the beginning of my professional artistic life, cementing St. Louis and That Uppity Theatre Company as a safe haven that I know will always welcome and support me."

It is the support and empowerment of the LGBTQ community in St. Louis and the recognition of artists who identify as members that makes the festival such a vibrant and vital part of our theater community. But everyone is welcome at Briefs, though performances are intended for mature audiences. The cast and crew is an ensemble of technicians, staff, and artists that reflect the St. Louis region, and includes LGBTQ and straight allies, as well as new and returning participants.

Long time ally Chris Limber returns once again to direct, while two newcomers to the festival, playwright Shannon Geier and director Sarah Lynne Holt, are rising stars in St. Louis Theater. The two are working to bring Geier's script on transgender acceptance to life for the festival while Geier is also participating in the premier production of her full-length play Fat, which opened at the Chapel on Alexander last weekend. Two concurrent productions make this an incredibly busy time for Geier, but she doesn't seem to mind at all and can be found beaming with pride at either show. As Geier told me, "The thing that means so much to me about the theatre is hearing the stories that don't usually get told. I don't see or hear the stories dealing with obesity and its effects. I don't hear stories about the families of the LGBT communities that often -- unless it's about how the family has shunned and disowned them, even though that isn't always the case. I want, and I think the audiences want, to be entertained, but to also be challenged to think and explore and look at things from a different perspective."

The festival offers the opportunity for under-represented voices in our community to be the focus, in the spotlight and not simply a supporting character. The show features eight to ten short plays, with each running about 10 minutes in length. This year's festival includes the Ken Haller award winner and a reprise production of one of the festival's most beloved shows, When Oprah Says Goodbye, as well as the highly anticipated Gaga by Jon Fraser.

Art and freedom of expression are essential for the survival and well being of our culture, including our LGBTQ and allied community. Through the festival, "we are getting the opportunity to see LGBTQ stories though the medium of live theatre," says Slyman. "Of course we read about these LGBTQ stories and hear about them, but we rarely have the opportunity to see them, and seeing is very powerful." Though several of the plays are likely to be serious in nature, the overall tone of the production is one that encourages acceptance and positivity. At its heart, Briefs is always a celebration of voices, stories, and people.

If previous festivals are any indication, patrons will want to ensure they order their tickets early, as Briefs: A Festival of Short LGBTQ Plays generally sells out the majority of its performances. Pearl Vodka and the Vital VOICE sponsor the show, which will run for four performances March 9 through March 11, 2017, in the .Zack Performing Arts Center.