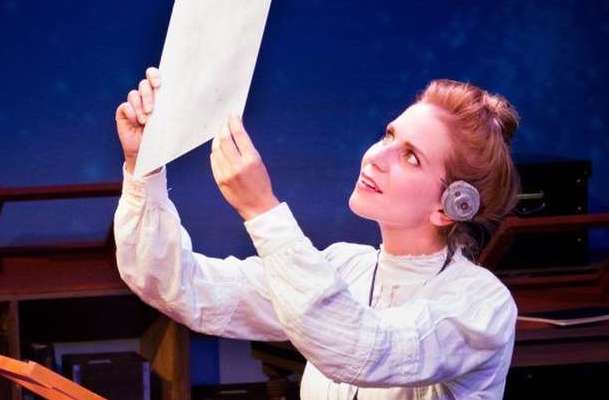 A Woman's Place is in the Dome!

For millennia men have ruled the realm of the hard sciences while women, of course, had governance over domesticity, motherhood, and the gentler arts. More than occasionally the male leaders in the sciences have led us into error. For example Ptolemy was a famously mistaken astronomer; mathematics led to the delusions of numerology; engineers built the Tower of Babel (and that other tower in Pisa). Could women, perhaps, have done a better job?

St. Louis University Theatre is dedicating its current season to plays about women in STEM fields -- i.e. Science, Technology, Engineering and Mathematics. Their current production is Lauren Gunderson's Silent Sky. It tells the true story of Henrietta Swan Leavitt, an astronomer at Harvard who in 1912 made a remarkable discovery that totally revolutionized our ability to measure the universe. Yet she has, 'til recently, remained more-or-less unknown. Her superiors and other colleagues (all men) took most of the credit. In 1925 the Nobel folks were about to nominate her for a prize when they discovered that, alas, the brilliant Miss Leavitt was already four years dead.

Henrietta, along with a number of other highly educated women, worked as a "computer" at the Harvard observatory under Prof. Edward Pickering. Their job was to scan thousands of glass photographic plates from the great telescope in Peru. They identified, catalogued and categorized many thousands of stars from the pinpoints of light on those plates. At thirty cents an hour they were not allowed to call themselves "astronomers". Perched at their desks, squinting into those slides, fiercely jotting notes, they were more like bean-counters than scientists. But their minds were at work, and several of these ladies made distinguished astronomical contributions.

Miss Leavitt's study, her obsession, was with Cepheid variables, a type of star that pulsates -- bright, dim, bright -- with wonderful regularity. She herself discovered 1,200 such stars (doubling the known catalogue). Her great discovery was of the relation between a star's period and its absolute luminosity: bright stars slow, dim stars fast. With this one could determine a star's actual distance from us. With this the universe expanded one-hundred-billion-fold!

This production of Silent Sky, under the direction of Lucy Cashion, is light, graceful and moving. Katie Schoenfeld gives full dimension to the reserved Henrietta, capturing her deep scientific passion as well as her conflicting dedication to family. Her strong performance is supported by equally fine work from Erica Withrow as Williamina Fleming and Miranda Jagels Felix as Annie Cannon. These are Henrietta's star-counting colleagues. Ms. Felix makes Miss Cannon a very powerful proto-feminist.

(I was a little surprised to hear this Annie speaking with a distinctly Spanish accent, but then I found that Ms. Felix is herself recently from Madrid.)

Now Williamina Fleming was a native of Scotland. She was working as housekeeper to Prof. Pickering when the professor, upset over the incompetence of a male employee, said "My housekeeper could do a better job!" He forthwith fired the slacker and replaced him with Mrs. Fleming. In this role Erica Withrow gives, I think, the most perfect performance of all. It twinkles with spirit and intelligence, and her Scottish accent is utterly convincing, fresh and clear.

Carlee Cosper is charming and loving as Henrietta's sister, Margaret. The deep love of these two sisters overcomes their strikingly different drives in life: Henrietta is totally committed to astronomy while Margaret subordinates her musical gifts to the more traditional path of family and church.

In SLU's November production of Arcadia we met Thomasina, an adolescent mathematical genius. Here we meet Henrietta, an adult astronomical genius. Thomas Edison once said that "Genius is one percent inspiration, ninety-nine percent perspiration." Thomasina's genius seemed to be pure inspiration, but with Henrietta that perspiration (or should I say "glow"?) was obvious in her many long, late nights of relentless pursuit of Cepheids.

As with Thomasina, Henrietta's brilliant gift was not unnoticed by her male superiors -- who were drawn to it, but didn't quite know how to deal with it. Henrietta's immediate supervisor was Peter Shaw, a nice guy but a very unexceptional scientific plodder. Peter is immediately smitten with her, but the conventions of the day make it impossible for him to see her as a real colleague. Nevertheless the beginnings of a romance burgeon between them--but that romance is to be sadly, awkwardly truncated.

Jimmy Bernatowicz does lovely work as Shaw, but the role as written makes it too easy to play him as a rather pompous male chauvinist. The drama would be enriched if we saw him as a bit more sensitive, truly in love and in a struggle with himself.

There was one tiny but irritating error that appeared throughout the evening: Those variable stars, first found in the constellation Cepheus, are pronounced "SEE-fee-id" not "SEFF-id".

An important aspect of the beauty of this production is the piano music which pervades the evening -- some of it recorded and some, I believe, live under the fingers of Carlee Cosper. There are lovely old church hymns as well as delicate crystalline abstractions that seem the very voices of stars.

Jim Burwinkle gives us a rather spare and flexible set which allows the vast sky to be ever-present, and lighting designer Mark Wilson and video designer Shannon Tinsley fill that sky with a thousand brilliant stars. (And, yes, those Cepheids really pulsate!) And Emily Vanencia's costumes are properly period and beautifully fitted.

Silent Sky is a lovely show. It played at St. Louis University March 2 through 5.