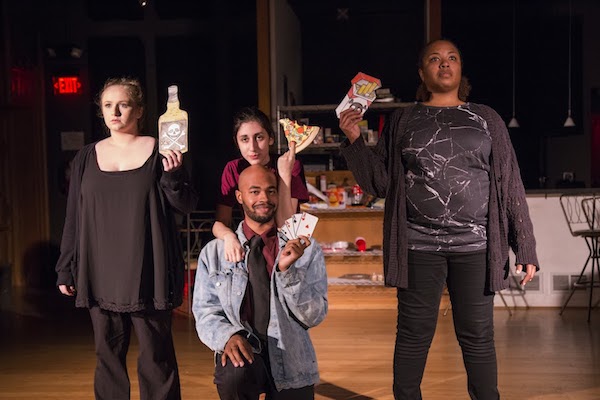 'Fat' tackles weighty issues in its look at America's obsession with food, obesity, and the perfect body

"You look great, did you lose weight?" "You have such a pretty face, if you could just lose some weight..." "You're so skinny, are you sick?" Fat shaming and body commenting in general is still socially acceptable in American culture. It's ok to crack jokes about the "fat guy" or to openly question whether a large stranger should be ordering an ice cream. The ensemble of because why not? theatre company forcefully reminds us of this fact at the open of Fat, before pushing us to look beyond our assumptions.

As consumers, we are faced with a constant deluge of commercials, diet products, and images of perfect people that shame us for having a less than perfectly proportioned body. Not too fat, not too thin -- if you want to be considered attractive and desirable, you, too, must conform. Even science shows that we have an obesity problem in the U.S., somehow adding to the permission to shame. The stories we don't often hear are the ones examining how this national obsession with our weight affects individuals and families.

Shannon Geier's new play Fat presents us with a family that is torn apart by its issues surrounding weight and food. Amy, in a truly sympathetic and conflicted performance by Taleesha Caturah, is in a constant battle with her weight. Her husband Joel responds by becoming over-vigilant, and Jeff Kargus somehow manages to keep him from being a complete ass, despite his irritating lack of support. Daughter Tara, played with genuine urgency by Alicen Moser, overhears her parents constantly arguing about Amy's weight before they divorce. As she matures, she develops eating and control issues of her own that threaten her health. This is a taut, uncomfortable family dynamic that feels all too real to anyone who has struggled with body issues or their weight.

After her divorce, Amy's friends and sister try to boost her spirits and keep her positive, but their own perceptions and issues crowd their best intentions. Christa Williams, Patricia Duffin, Rhonda Cropp, Laura Singleton, and Helen Pancella represent different perspectives on weight shared among women without feeling like caricatures. Duffin is outspoken in her appreciation of her health and weight. Singleton is constantly about to start working on her dream gym. Pancella chooses to ignore her health issues. Cropp immerses herself in work and online romances that never materialize. As Amy's sister, Williams is torn between support and embarrassment. In Amy's daughter Tara's story, Olivia Pilon is effectively kind and tugs at your heart as an overweight schoolmate.

Interspersed between scenes of Amy's life, friends, and family, Parvuna Sulaiman and Darrious Varner interject social ideals on body beauty via the commentary you hear in daily life. They are newscasters and spokespersons, a skinny waitress, and an insightful therapist. The two are also slim, conveying much with tone, shrugs, and sideways glances. Though never intentionally mean-spirited or overtly harsh, they provide a consistent voice of judgment that reflects reality. Director Andrea Standy skillfully weaves the commentary through the story, keeping the focus on Amy and Tara while reminding us all of the constant messaging we receive.

The cast handles the confrontations and inherent pain in Geier's script well, and several of the scenes hit remarkably close to home for anyone who has felt uncomfortable in their skin. Caturah and Kargus arguing over her weight and efforts, over the fact that food isn't something you can just give up. Duffin and Caturah meeting by chance in a restaurant, resulting in a civilized but vicious attack. Moser and Kargus arguing over her control and food issues, all the while skirting around the pain their characters feel for Amy. These scenes are fraught with emotional tension, authentically raw, and discomforting.

A few of the scenes feel somewhat unfinished and some of the transitions need work, but the overall impact of the show is psychologically and emotionally relevant to audiences of all shapes and sizes. We've all been part of these conversations; diet and exercise are as much a part of our common vernacular as asking about the weather. Geier's script and the heartfelt, emotionally connected performances strike hard at the conflict and offer an opportunity to consider other perspectives. Where I felt I was missing something in the script is in Amy's story. She comes across well, and her voice is effectively emotional and impactful; perhaps that's why I want to more fully know her character and motivations.

Thoughtful and perceptive, the show nudges audiences to reconsider their assumptions and to pay more attention to the messages around them. Fat, an original because why not? theatre company production running through Saturday, March 11, 2017, puts the spotlight on weight and obesity and asks us to take a deeper look at our own assumptions and response.