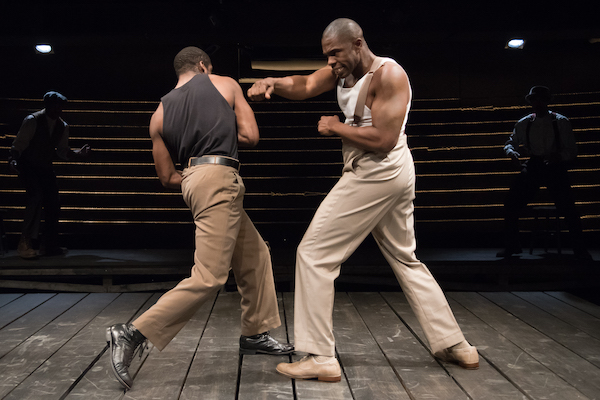 Filled with a determined rhythm, 'The Royale' recalls the link between sport and race

Set in the world of professional boxing in the early 1900s, The Royale takes a pointed look at race relations and the importance of sport in the eventual integration of our segregated nation. The Repertory Theatre of St. Louis' production is a dynamic and captivating interpretation of Marco Ramirez's tightly wound play, teaming with purpose, raw emotion, and rhythm.

Jay "the Sport" Jackson is the best boxer in the United States, but, because he's a black man he doesn't hold the official championship. Easily pummeling the competition his white promoter Max lines up, he longs to fight the white champion Bixby, who recently retired holding the title. Max arranges a bout, but is reluctant to set it up because of Bixby's ridiculous money split demands. Despite Max's objections, Jay accepts the deal.

While training with a promising young fighter named Fish and his ever-present coach Wynton, Jay gets a visit from his sister Nina. She begs him to consider losing the fight for the sake of peace, for others who may be punished by his victory. But Jay is filled with anger at the disparity of a segregated society, at the fact that his photo is never on the front page, not even in the sports section, and his sister never sees women in beauty adds that look like her. The championship fight is powerful and filled with a fierce spirit, but there are repercussions and the price paid is more than gold.

Akron Lanier Watson stands tall and self-assured as Jay. Warm and engaging when he smiles, he is even more imposing and formidable when he sets his jaw. He is quick and witty in the ring, his constant chatter almost as imposing as his fist. However, his humble, dignified demeanor outside the gym suggests he's taken his share of hits on both sides of the rope. Watson gives the character an authentic sense of urgency, and a resolute determination to carry the weight of racial injustice on his broad shoulders.

Lance Baker, as Max, is frightened and impressed by the determined boxer, while Bernard Gilbert, as Fish, and Samuel Ray Gates, as Wynton, are infectious, supportive teammates. Baker's nervous reactions when Jay challenges Max add subtle humor that releases some of the building tension. Gilbert's Fish is youthful and eager, likeable but with a stubborn will of his own. Gates, as Jay's trusted advisor Wynton, remains a constant calming and encouraging voice in the boxer's corner, his smooth, resonate voice providing an intellectual counterpoint to Jay's stinging jabs and solid punches. Watson, Gilbert, and Gates have easy chemistry and their friendships naturally intertwine.

Bria Walker is pleading and sympathetic as Nina, with a steely backbone and sharp wit of her own. She dances around the ring verbally sparring with her brother, cajoling and prodding both his anger and sense of responsibility. Webster University students Maalik Shakoor and Jarris Williams capably round out the cast, providing additional percussion and quickly engineering set changes as well as adding to the sense that we're at the boxing ring.

Under the sure direction of Stuart Carden, The Royale is a fast paced story that examines the individual moments and sacrifices made in the name of equality. The staging is effectively bold, allowing us to see both Jay and Fish as they fight. But we don't see them striking -- instead we view each in a separate spotlight. We watch as one fighter lunges forward, thrusting a contact punch with force, and then shift our focus as the other reacts, stumbling back or dodging with skillful footsteps.

The seamless incorporation of body percussion -- deliberate rhythmic movements such as beats, slaps, claps, stomps, and verbalizations -- designed and choreographed by Stephanie Paul, adds beautiful dimension to the tense, engrossing story. The sounds mimic the immediacy of the fight, underscoring the athletic movements, emphasizing their precision and power. Costume Designer Christine Pascual captures the era down to the leather gloves and fine suits, including Nina's matching skirt and jacket and Jay's summer linen. The set and lighting designs by Brian Sidney Bembridge and sound design by Mikhail Fiksel complete the environment, recreating a well-worn gym and providing a soundboard for the complex percussion.

The integration of sports was a key turning point in creating a less segregated society. Boxing matches, such as the fight between Jay and Bixby, and baseball games were the most popular of the occasional competitions held between the races as novelty events. But breaking the color barrier took years of athletes succeeding in Negro leagues and making financial sacrifices for the occasional opportunity to compete against white athletes. Though fictional, Ramirez's play is based on historical figures and accurately represents its era.

The winning show spectacularly combines percussion with a fresh perspective created through the staging and fully invested performances without forgetting its place in history. We clearly see that Jay's fight is about much more than the title. The Royale, running through March 26, 2017 at the Rep, delivers the heart racing excitement and suspense of a battle without the physical violence.