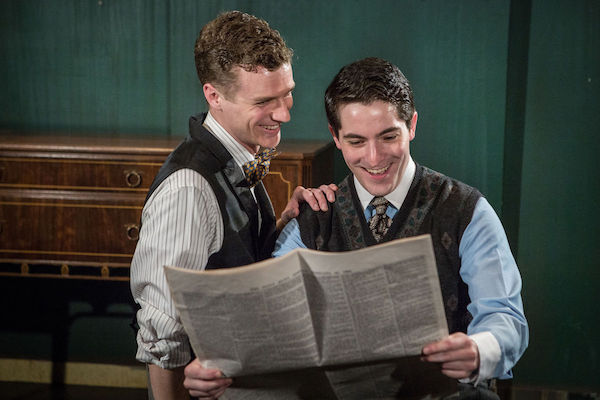 Unflinching and intense, 'Never the Sinner' revisits the romance and crimes of Leopold and Loeb

Dubbed "the crime of the century" at its time, the stunning case of Nathan Leopold and Richard Loeb is ripe with drama from the facts alone. In 1924, the two affluent and intelligent college students from Chicago kidnapped and brutally murdered a young boy as a social experiment. The New Jewish Theatre brings Never the Sinner to life in an engrossing tale that keeps you on the edge of your seat, with stunningly creepy and compelling performances by Pete Winfrey and Jack Zanger.

The three young men were members of the same community, Leopold and Loeb were lovers, of a sort, and the media propelled interest by spilling the sordid details on the front page day after day. Empowered with a sense of invincibility, the two do not deny their acts, and the prosecutor presses for the death penalty. In an impassioned plea for mercy and compassion, famed prosecutor Clarence Darrow defends the young men, not from their guilt in the crime, but from a sentence of death.

Winfrey and Zanger are mesmerizing, and oddly sympathetic, as their love story turns into a sordid game of control and reward that ends in a brutal crime. Brilliant and gifted with wealth, the two show a convincing air of disdain for those they don't deem their equal and spend their time pursuing intellectual and moral conundrums. Appealing and convincing as lovers, there's a fatal intensity between them that is deliciously and emotionally compelling. Winfrey expertly captures Loeb's charisma and need for attention in a character that is by turns charming and alarmingly callous. Zanger's Leopold is content to bask in the glow of Loeb's light, seeming to live only for his pursuit of intellectual stimulation, affection, and sexual gratification. But, as the closing moment so pointedly suggests, Leopold may have more influence than his actions infer.

John Flack, as Clarence Darrow, and Eric Dean White, as the prosecutor Robert Crowe, are dignified and equally passionate in their beliefs. Both eloquent and logical, if perplexing at times, their back and forth is a thoroughly engaging part of the plot. The three actors in the ensemble are as completely in the moment as the principles. John Reidy skillfully shifts his posture and lowers his voice, becoming a new character. Maggie Conroy dons a scarf and her just the facts ma'am reporter is a flouncing, flirty party girl. In a manner of seconds, Will Bonfiglio ages 15 years, using his physical bearing and facial expressions to go from eager cub reporter to wizened doctor. It's a genuine pleasure to watch as Dildine smartly builds scenes to moments that allow the actors to shine in service to the story.

The sounds of a photo bulb flashing and the casters rolling across the wooden floor as the set pieces glide in an out of place are deceptively simple and effective bits of stagecraft. The audio clues signify the fluidity of time within the framework of the drama while enabling a seamless transition from scene to scene. Whether intentional or not, the device is an important layer in the tapestry Dildine has created. The approach is cinematic in nature and the execution is flawless.

Period appropriate, Michele Friedman Siler's costumes and Margery Spack's props are quickly and easily modified to signal a change in time, place, or character. An exchange of hats turns a reporter into a policeman. Notebooks are swapped out for clipboards and two other reporters become psychiatrists probing the minds of Leopold and Loeb. The loss of a single pair of glasses becomes damning evidence, but the audience doesn't notice until Loeb questions Leopold in a critical scene that transforms to the police station with the addition of lights and an actor.

Another important layer is the gorgeous stage, designed by Peter and Margery Spack, with multiple ornithological drawings and paintings as well as the sculptural effect of hanging glass jars of liquids adorning the theater and set walls. The platforms and aforementioned furniture give prominence to key plot pieces and easily blend from scene to scene. Dildine and the cast take the same approach with the characters -- every tick, flinch, smile, arched or furrowed eyebrow, touch, and embrace adds context. Smart lighting by Maureen Berry and sound by Michael Perkins complete the enveloping environment and affirms the contemplative and moody disposition of the show.

John Logan's Never the Sinner, running through April 2, 2017, isn't always easy to watch. The subject matter is at times disturbing, but the story is enthralling. The murder of Bobby Franks by Nathan Leopold and Richard Loeb was a scandalous, newsworthy crime, and the New Jewish Theatre production is taut and captivating. Darrow's impassioned summary during the sentencing hearing is an important touchstone in our ongoing debate on capital punishment and the story of the two young murderers is surprisingly fascinating. The tension kept me in my seat during the brief intermission, anticipating and wanting to get on with the rest of a story that is as intimate as it is sensational and unsettling.