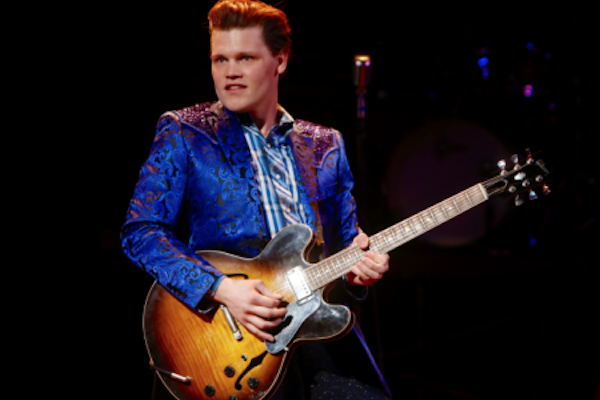 The Repertory Theatre of St. Louis sends their 50th season out with a celebratory rock 'n' roll dance party, and the audience is invited to get on their feet and join in the fun. Set on December 4, 1956, the fact-based Million Dollar Quartet recounts the one-time only, friendly recording session of Jerry Lee Lewis, Carl Perkins, Johnny Cash, and Elvis Presley at Sam Phillips' legendary Sun Studio in Memphis, Tennessee. The show touches upon the increasing influence of money, power, and the excess of fame as this new style of music catches on, but is mostly a feel good tribute.

Writers Colin Escott and Floyd Mutrux treat Phillips, the man who tirelessly promoted the genre, and the four influential performers who got their start in his small studio kindly in the script. Though the men's personal demons are all alluded to, the show is upbeat and generous, with a focus on the songs. At the time of this recording, rock and the men's careers were trending up, and the production wisely emphasizes the contributions of each performer to the genre.

As Sam Phillips, James Ludwig narrates the story, providing insight into each of the characters from the producer and promoter's experience. Framing the show in the space of Phillips' memory adds a sense of perspective that enables us to appreciate the musicians' talents both individually and as part of the history of rock music. Ludwig is charming and enthusiastic as Phillips, his love of music is clearly present while his emotional connection to the character works effectively to ground and focus the show. Ludwig's infectious smile, seemingly spontaneous jigs, and harmonica chops are an added bonus.

Jerry Lee Lewis, played with spirit and a comic touch by Dominique Scott, is young, brash, and outspoken. He's got confidence, a head-shaking mop of a hairstyle, and a mouth that doesn't know when to stop. His performance reminds us that Lewis' showmanship and mastery of the piano helped keep the instrument relevant during the rise of the guitar, and he has the moves and growls of Lewis down pat. Scott's rendition of "Real Wilde Child" really kicks the show into high gear.

Sky Seals conveys the plainspoken, storytelling style of Johnny Cash with a hint of gospel reverence that's also seen in Ari McKay Wilford, as Elvis. It occurs to me that Cash's is the most singular and difficult to imitate voice of the well-recognized singers. Seals gets the essence right, his mannerisms and intonation reflective of Cash, and his laconic way of interacting with others is instantly familiar. His voice stands out on "Ghost Riders in the Sky" as well as "Peace in the Valley," a genuine moment that shines in this production.

Wilford nicely suggests Elvis's vulnerability and his dependency on those around him, all the while sneering and playing with the king's signature moves. Wilford's more restrained interpretation, while not the Elvis we see in films, feels connected and well motivated, a surprising find for the production. His transition from Dean Martin impersonation on "Memories Are Made of This" to full on Elvis by the end of "That's All Right" is fluid and delightful to watch.

John Michael Presney flashes an easy smile as Carl Perkins, in a memorable interpretation of the early rocker that emphasizes his guitar virtuosity. Presney is also music director for the show and he makes good use of each actor's strengths in the vocal arrangements and harmonies. "Who Do You Love" transported me straight to guitar heaven and I instantly developed a crush on the talented and charismatic Presney. He and director Hunter Foster find areas to inject fresh spirit and interpretation into the show while keeping the pace fast and the characters on point.

Ryah Nixon, as Dyanne, an aspiring singer and starlet who accompanied Elvis that night, demonstrates a strong range and solid vocal chops, as well as a flirtatious nature. She hits all the notes and belts it out on "Fever" and "I Hear You Knocking," and her voice is a welcome addition to the harmonies. Nixon's playful demeanor and interaction with the players on stage, including session band members Eric Scott Anthony, as Brother Jay, and Zach Cossman, as Fluke, helps pull the show together, making it feel more like a genuine in-studio jam session.

The technical and artistic staff at the Rep gets in on the fun as well, completing the picture with a realistic looking storefront that opens to reveal an intricately detailed recording studio. Scenic designer Adam Koch makes excellent use of the Rep's resources and the intriguing closed view of the set demands attention as the audience fills the theater. The costume design, by Lauren T. Roark, pays attention to period details, though it always bugs me that Johnny Cash is clothed in all black but isn't dressed that way in the photo of the session that's inevitably projected over the stage.

Million Dollar Quartet is a big, celebratory rock 'n' roll party, filled with early classic rock songs, good-humored teasing, and the heart and soul of a dedicated promoter. The show's got a beat you can dance to and engaging, infectious performances, ensuring a whole lotta shaking and a fitting close to The Rep's anniversary season.