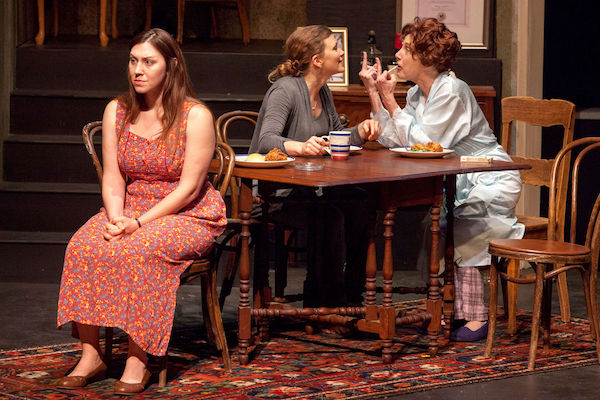 'August: Osage County' adds its own distinct dissonance to the chorus of dysfunctional family drama

St. Louis Actors Studio puts the drama in dramedy with its production of Tracy Letts' unsettling story about life, death, and family secrets. August: Osage County is ripe with an abundance of dark humor and more than the normal surprises. The dysfunctional Weston family constantly scratches at wounds that never really heal and fight battles that can't be won. The three-act show is intense, unrelenting, and impossibly compelling -- even when the story makes you cringe, you absolutely want to know what will happen next.

Matriarch Violet Weston has called her daughters and sister to the family's Oklahoma homestead after husband Bev, in a small but effective turn by Larry Dell, disappears. Professor Barbara, librarian Ivy, and dreamer Karen do not have a close relationship, a fact emphasized repeatedly during the family emergency. Violet's sister, Mattie Fay, tries to be supportive in her own way, but she's harsh at times, a lesser evil to Violet's viciously mean-spirited candor. Barbara's husband and daughter, Mattie Fay's husband and grown son, and Karen's sleazy fiancée, as well as the newly hired housekeeper Johnna and local sheriff, have all come along for this bumpy, uncertain ride.

The remarkable Kari Ely gives Violet a steely grip, caustic wit, and unrestrained temperament. She commands and demands attention, whether slurring and falling off a chair in a stupor, or attacking her daughters with "the truth." Delivering her lines with a sniper's accuracy, she breaks down every character she encounters with a venomous tongue. Ely is not afraid of being unlikeable; her natural charisma fights this in a way that simply increases the turmoil. You want to see Vi change, soften just a bit; and at times you think you see a gentler side of her, but it's just another of Vi's calculated manipulations.

Meghan Baker, as daughter Barbara, matches her blow for blow, but she doesn't have Violet's tenacity. She carries the weight of the world on her shoulders, saying as much with a resigned shrug or pointed look, Emily Baker, as Ivy, is quiet but filled with steely resolve that can't be broken, her desperately fleeting expressions telling much. Always observant and seemingly obedient, she displays a fiercely protective nature when threatened. Rachel Fenton flits about brightly as Karen, appropriately self-absorbed, blind to her own truths, and out-of-touch with the emotions of the rest of the family in a performance that speaks volumes about the character's coping mechanisms.

The women get sterling support from the men in their lives: Dell, David Wassilak, Stephen Peirick, and Drew Battles. Dell is drunk but sharp in his opening scene, ensuring Meaghan Baker's mirroring of his movements at the end of the play resonates loudly, one of many small but brilliant moments orchestrated by the sure hand of director Wayne Solomon. Wassilak, as Barbara's husband Bill, plays a man trying to do the right thing but losing patience and making it clear he'd rather be somewhere else. Peirick is awkward, clumsy, and endearingly sweet natured as Little Charles, Mattie Fay's much beleaguered son. He beams with genuine happiness in his scenes with Emily Baker, and stumbles and blushes when anyone else pays him attention. Battles slithers through the show, suggesting a man constantly on the prowl for his next amusement and accustomed to breaking rules without consequence, in a way that makes your skin crawl.

Bridget Basa is convincingly uninterested in the family drama as Barbara and Bill's daughter. Kim Furlow and William Roth squabble lovingly as sister Matty Fay and her husband Charles, and the two have a powerful moment when Charles finally stands up to Mattie Fay's brow beating. Wendy Renee Farmer and GP Hunsaker are effective in smaller supporting roles, and Farmer's consolation of Ely as the curtain falls is surprisingly tender. The ensemble crowds the stage in a way that expertly reflects and intensifies the inherent tension in the darkly comic tragedy creating a captivating, at times horrifying, story that deeply unsettles and satisfies.

The stage, by Patrick Huber, is a marvel in and of itself, and its compact, densely constructed three-story frame ensures the cast is uncomfortably close, yet frequently just out of reach. Dalton Robison's lights and Carla Landis' costumes and props and just the right ambiance and details to keep the scenes, spaces, and characters crisp and clear, not always easy to do with so many characters in such tight quarters.

The family dynamic is almost always compelling material, even more so when it's dangerously explosive. Letts captures that tension, and the related necessary releases of pressure, in a way that commands your attention. St. Louis Actors Studio's production of August: Osage County, running through April 30, 2017 is fantastically prickly and exceptionally well acted, creating a powerful evening of satisfying drama.