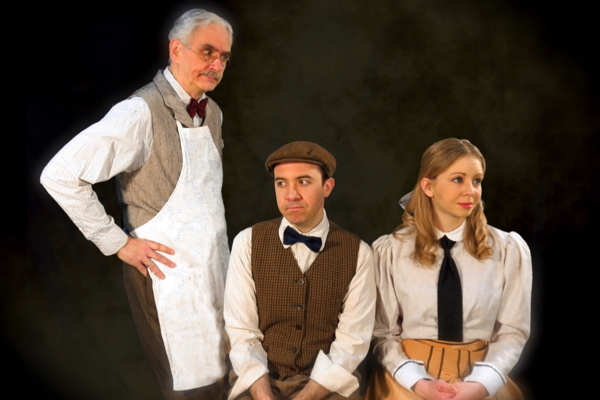 I've seen Thornton Wilder's Our Town numerous times. Watching it now is something like the comfort of an old shoe. But I still get a little moist in the eyes when Emily painfully realizes how little of life we appreciate each moment as we live it. I did again at the current Hawthorne Players' production, with an Emily, Jessica Gillard Taylor, who fully realizes her character's turbulent emotions in that postmortem third act.

Wilder's Transcendental thoughts about death and what follows give him a framework for extending his exploration of his characters. Beth Workman's Mrs. Gibbs, Emily's mother-in-law, is still rock solid. And Patrick Brueggen's Simon Stimson, the suicidal alcoholic choir director, still bitterly complains.

The third act is not the only place that Wilder darkens what could be mistaken for a purely idyllic picture of American small-town life a hundred years ago. The wedding of Emily and George is no simple, happy celebration. Both bride and groom almost flee from the church, terrified by this shedding of youthful innocence. Even Emily's mother, played by Kathy Fugate, who seemed to be having projection problems when I was there, laments to the audience about the cruel ignorance with which her daughter, like she herself once, is facing the complex sexual side of marriage. The brilliant promise of the paperboy played by Elijah Ross will come to naught in the absurd waste of the war in France. Even Emily's little brother will die of a burst appendix on a camping trip. Life is as uncertain in Grovers Corners as it is anywhere.

But we're not wrong to remember first the comforting images of this American life, the idyllic courtship of Emily and her George, played by Mark A. Neels less convincingly as an adolescent and star athlete than I would have liked, and the affectionate ease in their parents' marriages, with Tom Moore as Dr. Gibbs and John Robertson as Editor Webb.

On the usual bare stage, set designer Tim Grumich has hung flats and platforms against a curtain upstage for a little more visual interest. Tracey Newcomb made enriching costume choices. Bob Veatch's lights isolate some scenes. Stage manager Lori Potts precisely cues the realistic touches of Brian Borgstede's sound design. Director Lori Renna has pulled it all together for another deeply satisfying visit to Our Town.

The Hawthorne Players production continues at Florissant Civic Center Theatre through Sunday afternoon. Tickets are available online or through the box office at 314-921-5678.