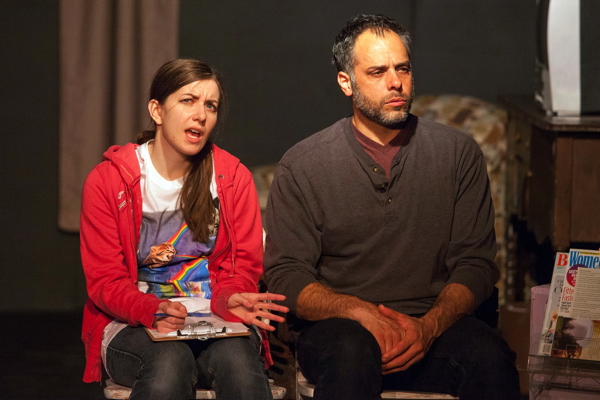 Lee Blessing has written many plays, mostly good ones. We've seen several of them here -- Eleemosynary most recently, Lonesome Hollow, A Walk in the Woods, his best known and, for me, his best. Now we have Great Falls at the West End Players Guild. I like it the least.

I could never quite believe in its two characters. I had the uneasy feeling that the playwright was still trying to get a hold on them. That's unusual for a playwright as experienced as Blessing, though he does like to explore uncharted territory in fresh ways.

But must young women characters in stories today all have been sexually abused by their fathers and raped by two of their classmates? Yes, these things do happen and they are terrible, but when they are used so often, it can be difficult for a playwright to make it seem real and not something easy to reach for to punch up his story. Not that Shannon Lampkin, who plays the young woman just turning 18, doesn't try to make it real. She makes me almost believe in the character, until another too-easy plot twist is introduced and I groan.

She is traveling with her step-father. He's picked her up at her summer job because he says he wants to talk to her, to try to re-establish some connection with her, connections broken when her mother divorced him for his infidelities.

The short talk turns into a weeks-long tour of the northern Rockies from their starting point in Fremont, Nebraska. She accuses him of kidnapping her. But she has a cell phone and even talks to her mother. She could be rescued. Eventually we find out why she isn't, what she wants from the trip.

But I never was sure what he wanted from it. He's obviously a troubled man, searching for something, but what it is and why he thought his step-daughter was where he could find it, I don't know. Again, the character lacked reality for me. Again, the actor playing him, Isaiah DiLorenzo, was trying. His range seemed a little limited, but I'm not sure what more he could dig out of the script.

Tom Kopp is a shrewd and sensitive director. It isn't his fault that it gets tedious sometimes.

Great Falls starts with an odd premise and I was never satisfied by what it did with it.

The production continues at West End Players Guild through Sunday afternoon, April 17, with tickets at 314-667-5686.