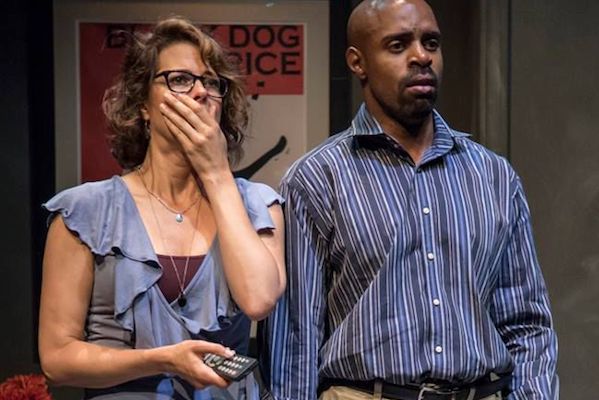 St. Louis Actors' Studio has clearly hit its stride with its annual LaBute New Theater Festival named for, and featuring a new work by, playwright and director Neil LaBute. As usual, the first part of the festival, running for two weekends, has me eagerly anticipating the second. The four plays presented in part one are uniformly strong and feature interesting plots and well developed characters; though there were a few miscues as well as some edits to be considered.

LaBute's Hate Crime, directed by John Pierson, opens the evening, and does so with brutal impact. The story tells of two lovers plotting to murder the fiancé of the younger lover. Chauncey Thomas and Greg Hunsaker play the lovers with such conviction and questionable motives that the audience is left more than a little uncertain as to the true feelings of either character. The script is viscerally powerful, and the unsettling ending so abrupt, it leaves one uncertain whether there's another scene to come.

Thomas's expressions are often at odds with the words he's saying, and he visibly bristles at Hunsaker's graphic descriptions, whether discussing the upcoming attack or describing intimate acts. Hunsaker reveals a raw, angry, hatefulness that makes you question why he is in the room with Thomas and, as importantly, why is Thomas with him. The story and sub-context are so clearly at odds with each other, it creates a vicious circle filled with tension.

Waiting for Erie Lackawanna by Ron Radice, directed by John Pierson, is a clever tongue twisting script that delights in wordplay and physical comedy while borrowing more than a little from Samuel Beckett's 'Waiting for Godot.' That last observation is both a positive and a negative. Radice show's a talent for dialogue and verbal gymnastics with a good sense of physical comedy; and Reginald Pierre, Spencer Sickmann, and Ryan Lawson-Maeske capably underplay the humor to great effect.

Pierre and Sickmann are significantly taller than Lawson-Maeske, and the three use this to great comic advantage, and Lawson-Maeske is appealingly convincing as the odd man out who simply doesn't want to ruffle feathers. Pierre and Sickmann bicker like an old married couple, and there's a running bit with the two men surreptitiously switching briefcases that's quite slick. The script becomes a bit self-indulgent and the references to Beckett a bit too obvious, however, causing the show to drag and feel about ten minutes too long, despite the bright performances.

Sacred Space, by Barbara Blumenthal-Ehrlich, directed by Nancy Bell, manages to surprise, educate, and move the audience with a quiet force. Set in a cloistered room reserved for prayers and preparation of the dead, on the morning after the Pulse Nightclub shooting in Orlando, the show both honors and challenges religious tradition while giving voice to the memory of those lost to horrific and inexplicable violence. Sophia Brown and Kim Furlow are Jewish women responsible for bathing and praying over the recently departed members of their congregation. The two are in the midst of administering to a deceased woman when their solemn reverence is interrupted by text messages from victims of the Pulse shooting, which start floating in the air above their work space. The women must decide why this is happening, what it means to them, and what they must do.

In all honesty, the script is a bit emotionally manipulative; but the intention feels pure and a genuinely heartfelt attempt to make sense of the senseless. Brown and Furlow turn in lovely, nuanced performances and the moment when most audience members realize the story unfolding was singularly forceful. The simple acts of dignity and care shown to the dead resonates without overplaying the tragedy.

The evening closes on a effectively comic, yet no less socially perceptive, play Percentage American by Carter W. Lewis, directed by John Pierson. Nancy Bell and Thomas are utterly delightful, self-absorbed, and somewhat pretentious, intellectually speaking. The two were matched via some online app or another, but neither was completely honest in their profile or initial text conversations. As a result, their initial meeting seems destined to fall flat and end quickly. That is, until they realize they are complaining about the same deficiencies of modern dating and the candidates you most frequently meet, which leads to a few awkwardly honest confessional revelations, and provides the missing spark.

After a discussion bemoaning the lack of truth in the world, Bell tells Thomas of a recent experience a couple she knows had while trying to rekindle their romance. In an instant, the two become newshounds sleuthing for the "real truth" and calling in favors from friends and contacts. Bell and Thomas are enthusiastic and impassioned by the process, while Kelly Schaschl provides excellent support as the tragic girl from the news as well as a plethora of newscasters. The script is funny and well written, one of the best the festival has produced, but there's a cautionary point to this tale as well.

Set and lighting designer Patrick Huber has clearly learned a thing or two during the festival's run as well. This years set is compact and efficient, quickly moving from one configuration to the next to reduce changeovers, either from scene-to-scene or play-to-play. Directors Bell and Pierson, along with Linda Kennedy who directs a piece in part two of the festival, provide smart sound design for their shows with selections from the pop canon that nicely transition from play-to-play.

The themes in part one of this year's LaBute New Play Festival, in performance at St. Louis Actors' Studio through July 16, 2017, with part two running July 21 through 30th, resonate contextually and emotionally. The well-crafted scripts feature sharp and insightful dialogue, and bristle with relevance as they explore current topics. The overall impact of the selected plays reinforces the idea that we do, in fact, live in interesting times.