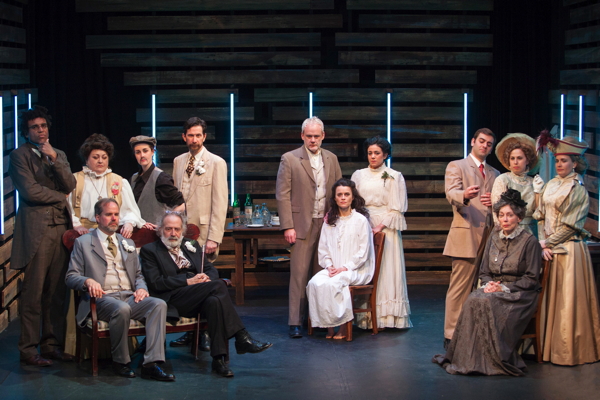 St. Louis Actors' Studio's Chekhov at the Gaslight through May 1

The St. Louis Actors Studio has opened a strong production of Anton Chekov's Ivanov. Technically it really presses the limits of the Studio's tiny stage, but with a very strong cast we are given a moving glimpse of Chekhov's groping toward a theatrical voice.

Ivanov is the first of Chekhov's major plays. In this Tom Stoppard translation we meet many of what are to become Chekhov's "usual suspects": the idle rural gentry, the "superfluous man," the conscientious and idealistic medical doctor, the innocent ingénue who loves the wrong man, the variously pathetic and comic hangers-on at the estate.

It's an early confirmation of Chekhov's position as the most non-judgmental of all dramatists.

Nikolai Ivanov is at the end of his rope. Five years ago he married (for love as well as for some money) the lovely Jewess, Sarah. Upon her marriage she converted to Christianity and changed her name to Anna -- which caused her parents to disinherit her. So the expected great dowry vanished. Since then things have not gone well. Ivanov is deeply in debt and has no prospects at all. Moreover, Anna is dying of tuberculosis--and Ivanov can't afford to give her a restorative trip to the Crimea.

Ivanov's behavior under this great stress is what caused critics at the time to condemn the play. Whenever he can Ivanov abandons Anna and goes to visit the family of an old college friend, Paul Lebedev. It's a congenial, gossipy household and it includes a young daughter, Sasha, who is infatuated with Ivanov. Ivanov, forever moaning about his great misery and depression, is to most observers simply waiting for his loving wife to die so that he can marry Sasha. Anna's attendant physician, Dr. Lvov, constantly castigates Ivanov for his treatment of his wife. Yet Chekhov refuses to condemn Ivanov. And he seems to mock the righteous and moralistic Dr. Lvov.

About these two characters Chekhov once said: "If the audience will leave the theatre with the conviction that Ivanovs are scoundrels and that Doctors Lvov are great men, then I'll have to give up and fling my pen to the devil."

Strong performances abound. Drew Battles has the huge title role, and he looks every inch Ivanov. It's a fine performance, but Chekhov has filled the role with self-pity, and it's difficult for us not to view Ivanov as a feckless whiner. With a bit more nuance, a bit more subtext -- and, in that relentless flow of words, some pauses to help us sense emotional transitions -- we might more clearly see that though Ivanov is feckless he is not heartless.

But it's a long show, and I know that director Wayne Salomon has a sharp stick to prod his actors into keeping a lively pace -- lest the play run even longer than its two-and-a-half hours.

The cast is filled with familiar, strong, and beloved actors. Anna is played by Julie Layton, who charms us despite her struggles with consumption. She conveys a glowing, tender love for her husband. The eccentric old Count Shabelsky is played by Bobby Miller. With wild Einsteinian white hair and a gravelly voice way in the back of his throat this is another of Miller's iconic alte kaker roles. What a comic wonder! But (a minor quibble): Shabelsky is a Russian count. A time or two, when he's gently teasing Anna, Chekhov has him assume a Yiddish accent. With Miller's very eccentric voice it's never quite clear when Shabelsky is not playing the comic Jew.

David Wasilak brings an exuberant silliness to the role of Borkin, Ivanov's estate manager, who is full of a thousand wacky schemes to make money.

Teresa Doggett makes a true virago of Zinaida, Ivanov's major creditor. When she screams to a servant, "BRING SOME JAM!! GOOSEBERRY, OR SOMETHING!" she's as fierce as the Red Queen crying "OFF WITH HIS HEAD!!"

Dr. Lvov is played by Reginald Pierre. Pierre is usually a most graceful actor, but here, though he's emotionally confident--even forceful--he seems almost uncomfortable in his body--almost fidgeting. I was puzzled by this choice.

Alexandra Petrullo brings sweetness and innocence to young Sasha, whose Florence-Nightingale heart sees a challenge in the troubled Ivanov.

To me, the most strikingly successful performance of all is that of B. Weller as Lebedev. I've watched Weller for many years and I've often been impressed by his engaging boyishness. Now, suddenly, Weller is filled with maturity and gravitas -- and subtlety and subtext! And that lovely good humor is still there. Even his make-up is perfect; it shows the slightly florid complexion of the heavy drinker that Lebedev is. Bravo to Mr. Weller!
Other fine performances are given by Cara Barresi, Shannon Nara, Jan Meyer, Clayton Bury and Léerin Campbell (the graceful maid always at hand to refill the vodka).

The beautiful costumes are by the astonishingly capable Teresa Doggett.

Sound design by director Wayne Salomon is a strange assortment of classic jazz, blues and R&B -- music that evokes the wee hours in a smoky bar. Lots of whispering steel brushes--(which to my knowledge had not yet appeared in 19th Century Russia). But the music does convey the melancholy that fills Ivanov.

Patrick Huber gives a striking and curious set. Chekhov uses four different sets -- not something easily done at the Gaslight, with it's tiny stage and no back-stage space. In this play we see a simple deep square room. Walls are of raw planking with (strangely indeed!) thin vertical deep blue fluorescent tubes adorning the walls. I don't understand it, but it works!

All of the furniture for all of the scenes is just there on stage, and is moved as necessary. And as if to crowd the space even further, actors do not leave the stage when they exit a scene; they simply take seats at the rear -- sometimes facing away from the scene being played, sometimes watching it. At times this is a little confusing, and all in all there is a great impediment to traffic; there's hardly space to move. But it does increase the sense of entrapment; these people simply cannot escape.

Ivanov is not great Chekhov, but I am most grateful to the St. Louis Actors Studio for mounting it. It introduces Chekhov's wonderful flair for blending the tragic with the absurd. This is epitomized in moment of hilarity when one after another of the central characters bursts into loud weeping over the wreckage of their lives, while poor Lebedev tries desperately to calm things -- and finally simply screams, "For God's sake SHUT UP!"

The St. Louis Actors' Studio production of Chekhov's Ivanov continues through May 1 at the Gaslight Theatre, 358 North Boyle For more information, call 314-458-2978 or visit stlas.org.