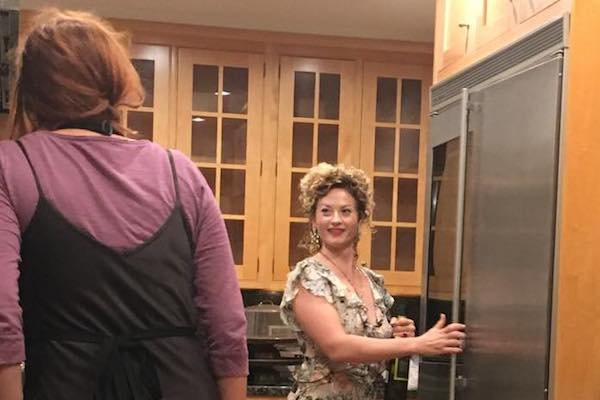 Imagine a play about people who are desperately bored, eking out an existence on an estate in remotest rural nineteenth-century Russia. How does one keep the play itself from being boring? Well, first choose Anton Chekhov as your playwright. Usually that's enough. Uncle Vanya has been fascinating audiences for a hundred and twenty years. But the young Rebel and Misfits company goes a step further by gathering a truly sterling cast of some of St. Louis' very best actors:

These are all truly fine actors and should, by themselves, guarantee a memorable evening of theater. But director Kelly Hummert has chosen to add one final trick to keep the audience alert and involved: it's what she calls "immersive theatre." The play is performed in an elegant home in wealthy Ladue -- on the patio, in the living room, the breakfast room, the study. Teas are served as we, the guests, gather. The actors (in character) are present at this gathering. When the play begins the actors move among the guests, occasionally addressing lines to them. The audience is led from place to place as the scenes require. Russian-themed drinks are served at intermission. All in all there is the air of a cocktail party.

This "immersive" gimmick is a very mixed blessing, as we shall see.

Vanya and Sonya have slaved for years to send money to support the professor in his work. Now they realize that the professor has done nothing worthwhile at all. Moreover, the professor, having retired, plans to live on the estate -- at their expense. Many plays center on a romantic triangle. Well here there develops a sad sort of romantic pentagon. Vanya is not only resentful toward the professor but he's simply mad for the beautiful Yelena, the professor's wife. She, though married, is strongly attracted to Dr. Astrov. But poor Sonya has been in love with Astrov for years! Astrov is mildly fond of Sonya, but really he considers her as just part of the furniture of the estate. That's Chekhov. Everybody is always in love with the wrong person.

And Sophia Brown quite transforms the play. Now in the script Yelena more than once describes herself as shy. In most productions she is buttoned to the neck in Victorian elegance -- her emotions repressed. Here we see the lovely miss Brown with hair that might pass as Victorian (in slight disarray), but with skirts slit to the hip. This anachronism is easily forgiven because it allows for the very natural and unashamedly sexual display of her beautiful legs. This woman excites! Her volatile and multi-layered performance makes it clear why Yelena so disrupts this stiflingly staid household. In the most poignant moments she can burst into a wonderfully infectious giggle. She is, as Vanya says, a mermaid; she entices men to crash their lives onto the rocks.

Andrew Neiman gives a vigorous and agonized portrayal of Vanya. Neiman is always a careful, focused, graceful actor. It's a fine performance but, oddly, to me he seemed perhaps a touch too vigorous and too graceful -- and maybe a bit too young and full of vitality -- for this tired and dispirited man.

Sonya is such a stoic. Francesca Ferrri quietly captures Sonya's strength and the desperation of her love for Astrov. This lady listens so intensely!

Peter Mayer is powerful as Professor Serebryakov. In the intimate scene between him and Yelena I sensed a real chemistry between them that I've never found in any of the various other productions I've seen.

Donna Weinsting is quite perfection in the role of Marina, the old nurse -- cheerfully dismissing her own aches and pains in her loving care for this family.

Suzanne Greenwald is brightly cranky as Vanya's mother, who still dotes on the worthless professor. And Kent Coffel is endearing and pathetic as Telegin -- and at certain moments he plays lovely background guitar.

So far as acting is concerned it's an excellent production, but there's a down-side to "immersive theatre.". In most plays the "constellation of characters" is important. Whether the scene is a monologue or a duo or a stageful of people, the corresponding solitude -- or intimacy -- or the busy crowd -- is a powerful element of the scene and is essential to its success. This is the social configuration in which these people play out their emotions. To place Uncle Vanya in the middle of a cocktail-party is a disservice to the play, to the actors, and to the audience. Not only is Chekhov's constellation of characters totally destroyed, not only is the movement of the players severely restricted, but the occasional addressing of lines to individuals in the audience seems to invite audience participation. More than once audience members called out what they felt were witty remarks. This format reduces a work by one of the world's greatest playwrights to the level of those embarrassing participatory murder mysteries that one still finds being performed in the odd mansion.

And in one scene the immersive environment was presumptuous enough to take on a speaking role. In the breakfast room the nearby refrigerator joined in. It was one of those new devices that are too clever by half, and it started beeping. Poor Jim Butz heroically stayed in character as he tried (unsuccessfully) to deal with it.

So I say hurrah for lots of superlatively fine acting, but a bas to "immersive theatre."