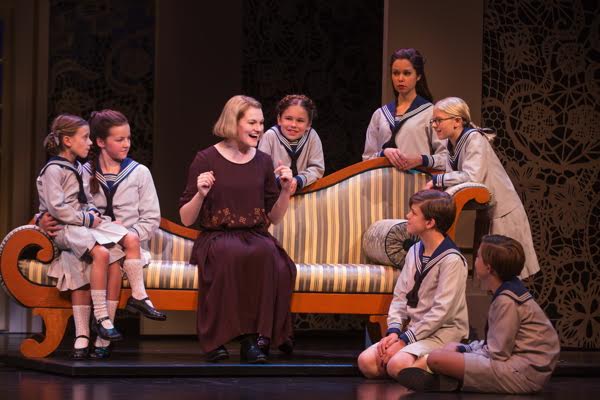 Joyful and optimistic, 'The Sound of Music' soars with fresh energy in a spirited revival

Filled with an abundance of familiar melodies, the new production of The Sound of Music, premiering at the Fox Theatre through May 8, 2016, brings a fresh perspective and an enthusiastic approach to this family friendly show. Clever direction by Jack O'Brien -- with orchestration by Robert Russell Bennett and dance and vocal arrangements by Trude Rittman -- takes the beloved musical and gives things a shake, breathing new life into to the story of the musical family that resisted the Nazi occupation of Austria and became cultural heroes.

Maria, a postulate nun played with joyful abandon by Kerstin Anderson, is missing from prayers again. The Mother Abbess, a sympathetic and powerful Melody Betts, must decide how to best guide the free-spirited girl. To help Maria find her purpose, she sends the young woman to serve as nanny to the von Trapp family. There Maria learns valuable lessons about herself, her ability to love, and her life's purpose. Captain von Trapp, played with amiable confidence and a soft heart by Ben Davis, is at first bewildered, then beguiled, by Maria's vibrant spirit and constant singing.

The seven von Trapp children, led by eldest sibling Liesl, in a radiant performance by Paige Silvester, quickly warm to Maria and they are soon singing, laughing, and thriving. The new stage production retains all the charm and appeal of the original while giving the show a fresh interpretation that emphasizes the romance without shorting the conflict of war. The Captain is fiercely committed to Austrian independence, an element of the story that receives definitive, if measured, emphasis in the production. Strong character development and a contemporary sense of World War II influence the production and the result is a fast-moving show that thoroughly entertains audiences of all ages.

Rodgers and Hammerstein's memorable songs and lyrics, as well as the book by Howard Lindsay and Russel Crouse as suggested by the original story by Maria Augusta Trapp, is treated with joyful reverence. The vocal arrangements emphasize the craft and musicality of the evocative, well-known songs, and are skillfully delivered by every member of the ensemble. Excellent harmony and stirring renditions are apparent from the first song, a reverent hymn from the Nuns at the Abbey, to the last reprise of "So-Long, Farewell." The dance sequences by Rittman and associate choreographer Jonathan Warren seamlessly weave in and out of the story, creating picturesque moments.

The scenes are crisp and lively and the tension, whether romantic or political, builds to a satisfying, hopeful conclusion that shows the Von Trapp family making their escape from the Germans by fleeing into the mountains they know and love. The attention to detail is apparent, with excellent sets, stage-craft and costuming that punctuates and reinforces the story arc.

As usual with a Fox Theatre production, the set and costumes are exquisite and the band and stagecraft nearly flawless. The characters are sharp and well-defined. Intentions and emotions are easily conveyed from the stage to the back of the house, yet they feel genuine and motivated. O'Brien directs with clear, purposeful vision, which is realized through Douglas W. Schmidt's scenic design, lighting by Natasha Katz, sound by Ken Travis, and costumes by Jane Greenwood. Jay Alger directs the band orchestra with precision, while production stage manager B. J. Forman ensures the set changes and transitions are effortless and timed perfectly to the actors' movements.

Theatergoers hoping to see a mirror of the movie starring Julie Andrews may be a bit surprised at the subtle but distinct changes in the new touring production of the show. Younger children may not understand all the historic and cultural references. But almost everyone is sure to be enchanted by the cheerful Maria and her brood of musically inclined siblings. The inspired revival of The Sound of Music, making its world premiere at the Fox Theatre and continuing through May 8, 2016, is thoroughly engaging entertainment for the whole family, with compelling performances filled with motivation and a plot that stays true to the original story.