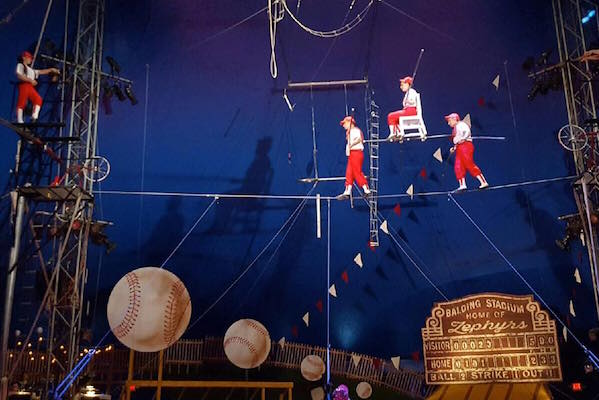 'Pastime,' Circus Flora's delightful ode to baseball, under the big top in Grand Center through July 3

In "Pastime," Circus Flora plays tribute to baseball in a constantly moving, thrill and laughter-packed show celebrating their thirtieth season. The story tells of the hapless Mound City Zephyrs, a rag tag group of ball players that just can’t seem to string together wins. The fans love the game and their team, cheering loudly and applauding every effort, and when super fan Amanda Crockett makes a spectacular play from the stands, the team’s fortunes begin to change. But is it enough? Can the Zephyrs really overtake the Aces and win the pennant?

Cecil Mackinnon, as Yo-Yo the Narrator, guides the audience along through the season, offering wisecracks, exposition and introducing all the players for each game, which consists of the various circus acts presented throughout the evening. We start off with the breathtaking tightrope work of the Flying Wallendas, a Circus Flora staple that continues to amaze us as they walk, bicycle and pyramid across a tiny, suspended rope.

Johnny Peer’s Dogs are humorous and well trained, and there’s a mix of breeds and lack of prima donna pedigree that makes them even more appealing. La Tarumba’s Horses are both powerful and graceful, and the skillful trick riding and acrobatic moves of the riders are awe-inspiring, keeping the audience on the edge of their seat.

The floor acrobatics, including the St. Louis Arches, are well choreographed and skillfully performed, and Sidney “Iking” Bateman and Melvin Diggs are quickly establishing themselves as major Circus Flora stars, with big smiles and lots of audience interaction. The second aerial troupe, the Flying Cortes, took the audience’s collective breath away with twists, turns and flips executed while soaring through the air.

While Yo-Yo provided exposition with a gentle touch of hope, it is super fan Crockett who nearly steals the show. From juggling and hat tricks to a hilarious aerial performance, she exudes joy with a deft touch and impeccable timing.