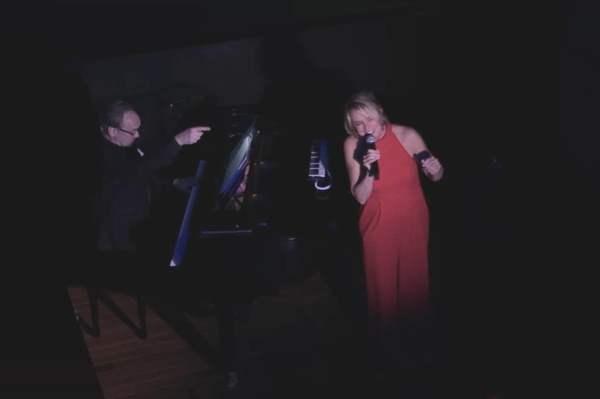 Review: Katie McGrath's 'Home(sick) for the Holidays' is cause for celebration and reflection

"Home(sick) for the Holidays," the latest show by former St. Louisan Katie McGrath, had its St. Louis premiere this past Saturday (December 28) at the Blue Strawberry. It was the perfect finale for that venue's 2019 cabaret season.

When I reviewed Katie McGrath's "Significant Others" show here back in 2017 I said it ought to be a chapter in a "How to Do Cabaret" textbook. "Home(sick) for the Holidays" was every bit as good, and for the same reasons: an eclectic song list ranging from Jon Bon Jovi to Stephen Sondheim (including original material by Ms. McGrath), perfectly tailored arrangements by pianist/music director Rick Jensen, ideally paced direction by cabaret luminary Lina Koutrakos, and Ms. McGrath's powerfully genuine stage presence.

It was, in short, a kind of Platonic ideal of both cabaret in general and the sub-genre I have come to think of as the "This is My Life" show, in which the song choices and the patter linking them draw heavily on details of the performer's personal history.

That's a type of cabaret that requires real courage. Done badly, it can come across as self-indulgent or (worse yet) a public therapy session. But Ms. McGrath, Mr. Jensen, and Ms. Koutrakos are far too good at what they do to ever put a foot wrong. However intimate and revealing some of her stories were, they always served as perfect introductions to the songs that followed, and often did so in a way that made me hear music I thought I knew well in an entirely different way.

That, friends, is what great cabaret is all about.

A case in point was her version of Paul Simon's "Love Me Like a Rock." She introduced it with memories of how often her mother saw her as a disappointment and how, years after her mother's death, they have "agreed to rewrite our narrative." It gave the song's refrain ("Oh, my mama loves me, she loves me / She get down on her knees and hug me / Oh, she loves me like a rock") an entirely new meaning and added a level of depth to what is otherwise a fairly simple and upbeat lyric.

Indeed, providing a radically different spin on familiar songs was a recurring theme of the show, thanks to Ms. McGrath's words and Mr. Jensen's inventive arrangements. I don't think, for example, it would ever have occurred to me to fit the silly lyrics of Randy Brooks's "Grandma Got Run Over by a Reindeer" to the melody of Bobbie Gentry's Southern Gothic "Ode to Billie Joe," but the result was simultaneously funny, creepy, and brilliant.

Another case in point was a medley of the Jay Livingston and Ray Evans holiday classic "Silver Bells" and Stephen Sondheim's "Another 100 People" (from "Company"). Starting out as the city dreamscape created by Livingston and Evans, it quickly descended into a kind of urban nightmare suggesting overcrowded streets and frantic consumers. Coming immediately afterwards, Harry Nilsson's "Everybody's Talking at Me" felt like a welcome escape from the seasonal madness.

Mr. Jensen, it should be noted, is a powerful singer and songwriter all by himself. His backup vocals gave weight to the final moments of the opening number, Jon Bon Jovi's "Who Says You Can't Go Home." And his solo performances of two of his own songs--"The Jensen Way" (accompanied by Ms. McGrath on melodica) and "You Better Say Yes to Christmas" ("because I hate Christmas," noted Mr. Jensen)--were two of the many highlights of the evening. The latter is a virtuoso display of rapid patter and complex internal rhymes so scintillating and tricky that even Mr. Jensen got briefly lost at one point.

The evening was also enhanced by a pair of duets featuring local singers. Bob Becherer joined Ms. McGrath for a joyously affectionate performance of Richard Carpenter and Frank Pooler's "Merry Christmas Darling" (a hit for The Carpenters in 1970). Merry Keller lent her classically trained voice to a moving rendition of "The Little Drummer Boy/Peace on Earth," a medley written for and first performed by Bing Crosby and David Bowie on Crosby's 1977 "Merrie Olde Christmas" TV special (the last such special he would ever do). The lyrics mix the drum imagery of the classic carol with a plea for peace that is both potent and sad, and it came across beautifully as Ms. McGrath's and Ms. Keller's voices rose and twined around each other.

Ms. McGrath's significant other Chet Whye, Jr., also joined her for one of the better comic moments of the show: Frank Loesser's "Baby It's Cold Outside" with parody lyrics by Penn and Kim Holderness (who first performed it in a popular YouTube video last year). The obvious affection shared by Ms. McGrath and Mr. Whye added a whole new level of fun to this clever satire.

I noted earlier that an autobiographical show requires courage. So does making a strong political statement in a time of rising levels of hatred and toxic nativism at the highest echelons of government. Ms. McGrath's response was the chorus of Shawn Mulins's ironic "Lullaby" coupled with an original poem of her own about an immigrant mother and daughter making the hard trek northwards to escape violence, only to be imprisoned and separated at our nation's southern border. It was bold, unbearably moving, and a sad reminder of how far our ideals have fallen from the words emblazoned on the Statue of Liberty.

That was followed by brief instrumental quote from "Hark the Herald Angels Sing," which led in turn to Charlie Colin and Pat Monahan's "Calling All Angels" (recorded by the group Train in 2003). In this context, the song's refrain was a clear call to action: "When there is no place safe and no safe place to put my head / When you feel the world shake from the words that are said / And I'm calling all angels / And I'm calling all you angels."

There were other memorable moments in this show--over an hour of them, including a surprisingly elegiac version of Marc Cohn's "Walking in Memphis"--but assuming you have read this far, I have taken enough of your time already. Thanks to Katie McGrath, Rick Jensen, and Lina Koutrakos for creating this unexpected spin on the solstice holidays and to Jim Dolan for bringing it home so soon after its December 14th premiere at Don't Tell Mama in New York .

Shows continue well into the New Year at The Blue Strawberry, St. Louis's only dedicated bar/restaurant/cabaret showroom. Check their web site at bluestrawberrystl.com for details.