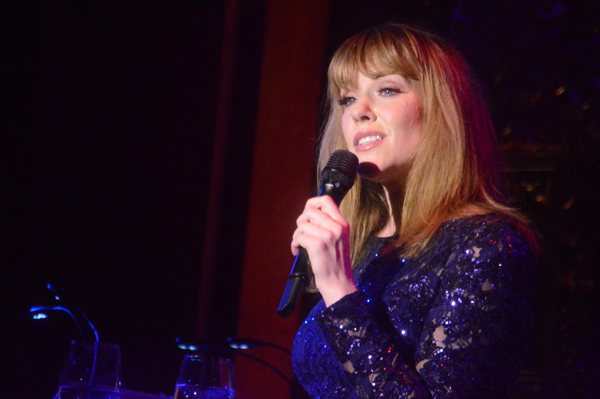 As the risk of putting whatever reputation I might have as a critic at risk, I have a confession to make: I don't like writing negative reviews. As long as the performance justifies it, I'd rather write a paean than a pan.

Which is why reviewing Emily Skinner's "Broadway My Way" at the Blue Strawberry last weekend (January 10 and 11) is such a pleasure. This was a show that did everything right and nothing wrong. As an example of the "song showcase" variety of cabaret (in which the focus is on the songs rather than the singer) it was simply nonpareil.

The charismatic Ms. Skinner, for the benefit of those of you who may not be familiar with her, has been a very successful singer/actress in New York for over 25 years, with leading roles in shows like "Jekyll and Hyde," "The Full Monty," "Side Show," and "Billy Elliot." Local theatregoers may also recall her powerful performance as Phyllis in Sondheim's "Follies" at the Rep in 2016 or her Ursula in "The Little Mermaid" at the Muny in 2017.

Not surprisingly, then, "Broadway My Way" was a collection of ten songs from shows in which she has appeared over the years, from the aforementioned "Follies" to (I kid you not) "The Cher Show," a 2018 jukebox musical based on the life and songs of the pop icon. Anecdotes from her showbiz career and insightful commentary on the lyrics made up the core of the patter that held the evening together.

More than once, that commentary shed a whole new light on a song I thought I knew well. She prefaced her "Children Will Listen" (from Sondheim's "Into the Woods"), for example, with the observation that although many singers treat it as an uplifting or sentimental piece it is, in reality, a warning--one that is especially relevant in today's political climate. Heard in that context, its lyrics took on a disturbing subtext that is not only justifiable but probably what the composer had in mind in the first place: "Careful the things you say / Children will listen / Careful the things you do / Children will see / And learn."

What really made all this work, of course, were Ms. Skinner's remarkable acting chops and vocal versatility. She has a big "Broadway belter" voice with solid low notes that served her well in her broad and comically precise "Poor Unfortunate Souls" (from "Little Mermaid") and in her just-this-side-of-campy "Half-Breed," which she sang in the role of Cher's mother in "The Cher Show."

And yet she used that same voice to deliver a simple, charming performance of "Bill" (from "Showboat") with the piping sweetness of an operetta soubrette. Later in the evening, she did an impressive impersonation of Mae West's lubricious alto in "Come Up and See Me Sometime" that even included West's trademark rapid vibrato. That's some solid vocal control.

As an actress, she thoroughly inhabited the characters in each song. Her "All that Jazz" (from "Chicago") was slinky and sexy, while her "When You're Good to Mama" (ditto) had all the brassy attitude you'd expect in this double entendre classic. There was palpable sadness in "Send in the Clowns" (from "A Little Night Music") and a mix of anger and pain in "Could I Leave You" ("Follies") so powerful that afterwards she laughed and said "you're all scared of me now, aren't you?"

I think maybe we were, just a bit.

Backing Ms. Skinner up was New York-based pianist and music director John Fischer. He has a pretty impressive resume of his own, including nine years as music director for the Broadway's Rising Stars, Broadway Originals concerts at New York City's Town Hall. His arrangements were creative enough to display his keyboard mastery without stealing focus from Ms. Skinner. Perhaps the most impressive demonstration of his virtuosity, though, came in a typically demanding arrangement by Jason Robert Brown (composer of "The Last Five Years," "Songs for a New World," and other shows of note) of Sondheim's "Now You Know" (from "Merrily We Roll Along").

The song's practical advice to disenchanted idealists was, Ms. Skinner noted, a favorite of legendary producer Hal Prince, whose many hits tend to make people forget his numerous flops. Her performance had just the right mix of tough love and sympathy that the lyrics suggest.

Toward the end of the evening, Ms. Skinner described herself as "a lyric person," something which, by then, was readily apparent. The power and flexibility of her voice was more than matched by her respect for and ability to clearly communicate the lyrics of her songs. That's an essential aspect of this hybrid art form known as cabaret, and her understanding of that was ultimately what made "Broadway My Way" such a knockout of a show.

For information on Emily Skinner's upcoming appearances, check out her web site. For information on shows at The Blue Strawberry, St. Louis's only dedicated bar/restaurant/cabaret showroom, the place to surf is bluestrawberrystl.com.