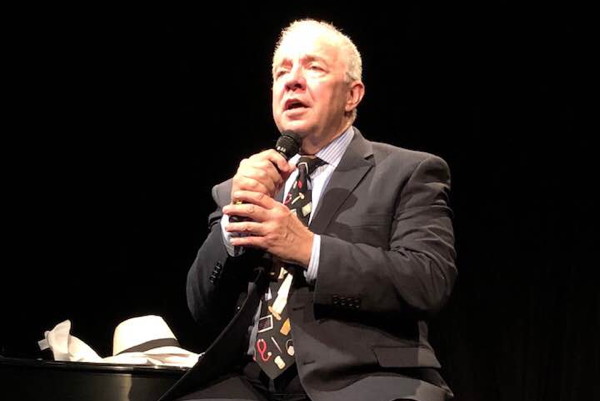 The pandemic has all but shut down the local cabaret scene. The one exception has been Jim Dolan's Blue Strawberry nightclub, although even there a "new normal" is very much in force with reduced capacity, mandatory masking, and other precautions, including (for some events) a reduced-price ticket for a live video stream of the evening's show.

That, in fact, is how I saw the return engagement of Ken Haller's 2019 show "When I'm 65" on Hallowe'en (which is also Mr. Haller's birthday). Retitled "When I'm 66," the new version is so nearly identical to the original that I'm going to refer you to my review of that one for the stuff that remained unchanged. One of those things that remained unchanged, happily, was the varied and neatly balanced song list, blended with just enough patter to let us know why the list made sense. Under the direction of Mr. Dolan the result, once again, was a perfect mix of the mirthful and the moving.

That said, there were some small differences this time around. To begin with,  Nick Valdez replaced Mr. Haller's original music director, Marty Fox. Last year I was impressed by the close rapport of the Haller/Fox team. I'm happy to say that I saw much the same close collaboration in the Haller/Valdez team-up.

There were also a few tweaks here and there in the patter and the song list. The most significant change was in the moving and powerful segment on love and loss built around Mr. Haller's reminiscences of the first great love of his life, Bob Corsico, and the lessons he took from that relationship. The original set segued from William Finn's "Heart and Music" (from "A New Brain") into "I Could Write a Book" from Rodgers and Hart's "Pal Joey." It worked well enough, but this time it led instead to Harold Arlen's "If I Only Had a Heart" (from "The Wizard of Oz"). It was a somewhat more powerful and risky choice, and gave the set—already the emotional heart of the show—even more punch this time around.

Mr. Haller's encore was the same as last year—James Taylor's "Shower the People" done as a sing-along. But right now, in the middle of a pandemic and with a torrent of hatred pouring from the White House, the refrain feels even more urgent than it did a year ago:

If we only could.

There were a few fluffed lyrics here and there (an occupational hazard of the cabaret artist), and Mr. Haller's normally sturdy voice had a bit of a ragged edge brought on by an allergy attack and the drying effect antihistamines have on the throat and nasal passages. As a lifetime allergy sufferer myself, I can relate. These were minor distractions, though, which is why I have left them for the end of the review.

Ken Haller's wise and witty "When I'm 66" played for one night only, but shows continue at the Blue Strawberry on North Boyle into the new year. Visit the web site for more information.