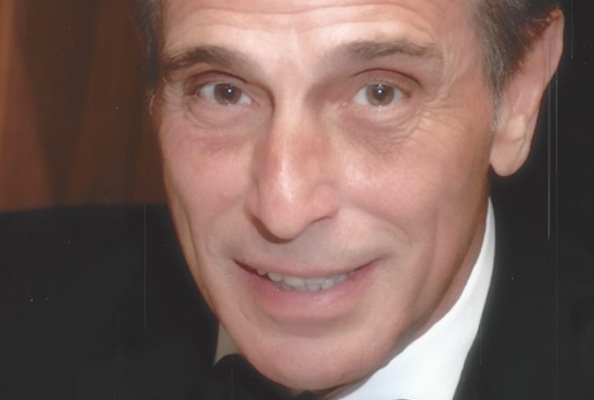 Like many men his age, David Giuntoli grew up during a time of musical change and revolution, and his tastes are varied. But he never lost his appreciation for the pleasant style and charming affectations of Frank Sinatra, a singer he first came to admire after hearing him repeatedly on his sister's 78-rpm records. Growing up during the heyday of the Rat Pack, Giuntoli had plenty of opportunity to watch and learn from the masters of the trade, and it's clear from is performance that he's an apt student.

Giuntoli doesn't have a multi-octave range or the soaring notes of a Broadway tenor, what he has, and uses to great effect, is a solid mid range that's got a hint of raspy wear to it but still slides from note to note with ease and accuracy. He opens the show with the up-tempo "I've got the world on a String," a swingy number that sets the tone and introduces Giuntoli's upbeat, positive attitude.

A few words of introduction and reminiscing about how his connection to the music is interspersed with some trivia and facts about Sinatra, and Giuntoli quickly shifts into a successful three-song set. "The Best Is yet to Come," "I've Got You Under My Skin," and a surprisingly fresh and engaging take on "The Way You Look Tonight" flow together naturally, with a few pleasant interjections, establishing Giuntoli's approach to music mad popular by Sinatra. After another song or two, this section seems to close with the wonderfully light "I Get A Kick Out of You" seamlessly transitioning into a breezy, romantic "Fly Me to the Moon."

After a brief pause for a sip or two of water and more chatter with the crowd, many of whom are familiar to the artist, Giuntoli thoughtfully introduces a number of lesser-known Sinatra hits. It may be an age difference or simply changing tastes, but I was unfamiliar with a number of the songs during this section of the performance.  "Luck Be A Lady" and "The Lady Is a Tramp," are easily recognized, but numbers such as "Baby Dream Your Dream," "Summer Wind," and several others, though new to me, were nicely presented and helped to showcase Giuntoli's richly textured interpretations and solid range.

The evening closes out with another upbeat, up-tempo set, featuring "Night and Day," "Come Fly with Me," and the humorous "Ain't That a Kick in the Head." Giuntoli doesn't quite have the power, and the pacing of the songs seemed to drag at times here and there, but the overall effect is engaging and enjoyable.

The artist shows clear understanding of both the subject mater and emotional context he wants to convey, but the ending lacked definitive punctuation. After a number of songs in the same tempo and style, the songs in the cabaret can take on a sense of sameness. I'd love to see Giuntoli take on a few ballads, or even a high-energy show-stopping piece, to add some variety, and I'd encourage a second look at the order of song presentation to see how he can create a better emotional and musical arc throughout the show.

Giuntoli clearly enjoys and understands the era and style he's going after, and he succeeds in offering a genuinely enjoyable tribute to Sinatra. Adam Maness and Ben Wheeler provide musical accompaniment and a few rousing solos of their own, and Giuntoli's wife joins him on stage for a humorous duet on "The Lady Is a Tramp," but this is clearly a solo show.

Giuntoli has a good command of his props, quips, and facts, I'd like to see him incorporate more of his own story in addition to the bits of Sinatra trivia. I may have been in the minority at the performance attended at the Emerald Room, but if part of his hope is attracting broader audience and introducing the songs of the Rat Pack to a new generation, his story needs a bit of development. If he can succeed in incorporating the personal as well as the informational, perhaps by relating how the music impacted his life or helped him get through a critical moment, this cabaret could be a popular draw.