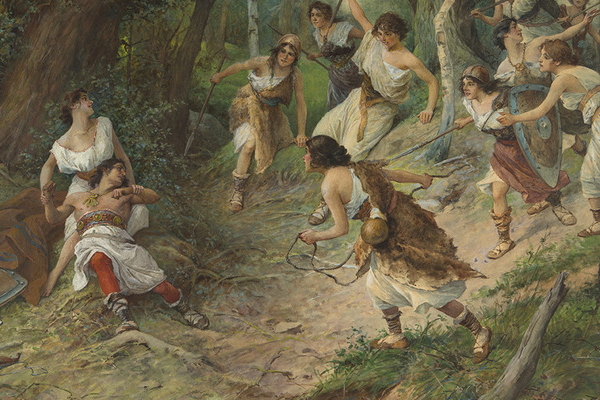 It's an evening of Romantic blockbusters this weekend (March 2 and 3, 2018) as Christian Arming makes his conducting debut with the St. Louis Symphony Orchestra in a program that includes Tchaikovsky's popular Piano Concerto No. 1 in B-flat minor, Op. 23, with Rémi Geniet (also making his local debut) as soloist.

The concerts will open with the symphonic poem "Sárka," the third of the six works that make up Smetana's epic cycle "Má vlast" ("My Homeland"). It's an interesting choice, in that it's based on a fairly bloody bit of Czech legend.

The story comes from the tale of the legendary "Maiden's War" which may (or may not) have taken place in the 6th or 7th century. First described in the twelfth-century "Chronica Boëmorum" and later in the fourteenth-century "Dalimil's Chronicle," this literal war between men and women was supposedly sparked by the death of Libuse, the last in a line of matriarchal rulers of Czech society. Here's Vaclav Ledvinka, director of Prague's city archives, describing what Czech legend says happened as a result:

When Libuse died, the matriarchal system of power came to an end, and a patriarchal system was introduced, with the arrival of Prince Premysl, the forefather of the Premyslid dynasty, which later ruled the Czech Lands for several hundred years. The women were apparently furious at this change, and this led to a civil war between Czech women and men.

One of the fighters in that civil war was Sárka, a lieutenant of the fierce warrior woman Vlasata. In the legend, Sárka seduces the warrior Ctirad and then, with the help of her fellow Amazons, slaughters him and his men in their sleep.

Smetana's tone painting is fairly literal and concludes with a particularly violent orchestral outburst. "The music is vivid and suspenseful," writes René Spencer Saller in her program notes, "with sharply contrasting motives: churning tempests reminiscent of The Flying Dutchman reveal the heroine's rage, a sinuous clarinet suggests her seductive wiles, a march represents the advancing male army, and rumbling bassoons mimic the snores of the doomed men." I keep hoping the SLSO will perform all of "Má vlast" one of these days (the orchestra's complete recording with Walter Susskind is still one of my favorites) but meanwhile it's good to hear bits of it now and then.

Next on the program is Robert Schumann's Symphony No. 1 in B-flat major, Op. 38, known as the "spring" symphony-even though it was composed in the dead of winter, during an amazingly productive four days at the end of January, 1841. The symphony comes from a happy time in Schumann's life-he had just married his one great love, Clara Wieck, the previous September-and it's not hard to hear that joy in this energetic and sunny work.

It doesn't start that way, mind you. The Introduction to the first movement, marked Andante un poco maestoso, is a solemn invocation of grey winter skies, reflecting the opening stanza of "Frühlingsgedicht," the Adolf Böttger poem that inspired the composer:

You spirit of the clouds, grey and heavy
Looming over land and sea
Your obscure veil obscures in a frozen moment
The clear eye of heaven

But this isn't "Game of Thrones," and winter is going rather than coming. An exuberant horn call leads to the main Allegro molto vivace and spring bursts out in all its glory, mirroring the final stanza of the poem:

O turn, O turn and change your course-
In the valley spring blooms forth!

From there on it's springtime for Schumann.

Ms. Saller has a nice, compact analysis of the symphony in her program notes, but if you want a closer look, check out conductor Kenneth Woods's detailed commentary, written to accompany his own recording of the work with the Orchestra of the Swan. That's where I got the information on the Böttger poem.

The concerts will conclude with the excessively popular Tchaikovsky concerto, a work which has not lacked for fine performances by the SLSO in recent years. That includes the unorthodox but compelling Kirill Gerstein version in 2013 and the volcanic Yefim Bronfman approach in 2011.

The soloist this time around is the young (mid-twenties) French pianist Rémi Geniet, whose recent recital at the Morgan Library got a glowing write-up from the New York Music Daily blog, which heaped praise on both his technical facility and (perhaps more relevant for this weekend) his ability to shine new light on established classics.  It will be interesting to hear his perspective on a well-loved warhorse like the Tchaikovsky.

Finally: if you're wondering why there's no Sunday afternoon concert, that's because Resident Conductor Gemma New will lead the SLSO Youth Orchestra Sunday at 3 pm with a program of Britten's "Soirées musicales," Tchaikovsky's "Capriccio Italien," and Sibelius's Symphony No. 2. You probably know that last two pieces, but you might not be familiar with the Britten. It's a brilliantly re-imagined collection of five pieces by Rossini, orchestrated in a witty and fanciful style. Ms. New and her young players should have a good time with it, as will you.