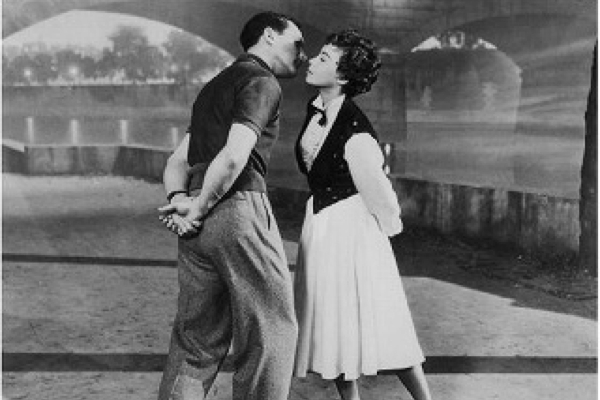 Review: Gene Kelly's 'An American in Paris' remains a classic at Powell Hall

The movie nights that are part of the St. Louis Symphony Orchestra's "Powell Hall Live" series have always been a pleasure for me, back since they were largely limited to silent films like "City Lights" and "Phantom of the Opera." There's nothing quite like hearing a good film score performed live by the orchestra while the movie unfolds on the very big screen at Powell Hall.

I saw the final film of the season was last Saturday, (May 13, 2018) and it was a classic: the 1951 Oscar winner "An American in Paris," with the orchestra doing full justice to the music of George and Ira Gershwin.

The 17-minute "American in Paris Ballet" that concludes the movie (and effectively sweeps away what's left of the sketchy story line) is justifiably famous, with inventive choreography by star Gene Kelly and gorgeous Technicolor sets that pay homage to a half-dozen noted early-20th century French painters.

The way Gershwin's original tone poem is re-orchestrated and re-arranged can be a bit disorienting if you know the original, though. Kudos are due the players and conductor Norman Huynh (Associate Conductor of the Oregon Symphony) for expertly threading the music needle in that score, even managing to stay in synch with Kelly's rapid-fire tap numbers.

There are other moments in the film that sound equally challenging for the live orchestra. There is, for instance, a sequence in which Oscar Levant (as struggling concert pianist Adam Cook) fantasizes about playing the fiery final Allegro Agitato movement from Gershwin's "Concerto in F" with an orchestra, audience, and conductor who all turn out to share his face.

The performance on the film is Levant's own (he was a legendary Gershwin interpreter) but in this concert version of the movie the live band plays the orchestral part. Normally there's some give and take between a conductor and a soloist. I'd say it's a bit more tricky when the soloist has been dead for over four decades, especially when Gershwin's music has, once again, been somewhat arbitrarily rearranged and reshuffled. It all sounded seamless when we saw it on Saturday night.

"An American in Paris" is, in any case, a movie that richly deserves its classic status, colorfully evoking the City of Light despite being filmed almost entirely on a Hollywood back lot. The slim story doesn't get in the way of the endless stream of great Gershwin music. Gene Kelly's character isn't nearly as tiresomely petulant as I remembered and his blitzkrieg charm remains irresistible, especially when paired with his bravura dancing. Co-star Leslie Caron wasn't much of an actress in her film debut here, but her dancing more than makes up for it.

French cabaret star Georges Guétary is a delight in his all-too-brief appearances as aging cabaret singer Henri Baurel. The role was originally intended for the more age-appropriate Maurice Chevalier, but Guétary still pulls it off nicely. Nina Foch is somewhat wasted as spoiled American heiress Milo Roberts, but it's a real pleasure to see footage of the legendary Oscar Levant at the keyboard.

The print, presumably based on the Warner Brothers 2012 digital restoration, was clear and sharp, making it easy to appreciate Vincente Minnelli's direction and the beautiful cinematography of Alfred Gilks and (in the ballet sequence) John Alton. The subtitles made it easy to follow the dialogue, even when (as in the Beaux Arts ball sequence that leads up to the ballet) the live orchestra drowns out that dialogue.

PGM Productions, the company that produced this in-concert version of the film, has done an impressive job melding the live orchestra with the filmed performances. Given that its founder, John Goberman, is the creator of the "Live from Lincoln Center" TV series, that's no surprise. Thanks to the SLSO for bringing it to us and for the orchestra for doing such a bang-up job of it.

"An American in Paris" was the last film event for the season, but Powell Hall Live events continue through June, including tribute concerts to Tom Petty and George Michael, along with appearances by acts as varied as Indigo Girls, Boyz II Men, and Heather Land. Those of you wanting to get your 60s mojo on (you know who you are) may want to check out the "Music of Pink Floyd" evening as well. The SLSO Youth Orchestra plays its last concert of the season on June 3rd, and regular concert season resumes in the fall.