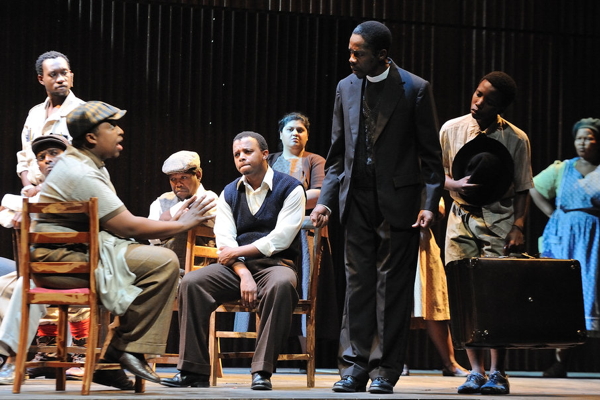 Preview: Deep background on Union Avenue's 'Lost in the Stars'

On Wednesday, August 7th, Union Avenue Opera hosted a fascinating panel discussion about Kurt Weill's "Lost in the Stars," which the company is presenting August 17 - 25.

Dr. Timothy Parsons of Washington University talked about the historical background of the opera (described by its composer as a "musical tragedy"), which takes place in South Africa under apartheid. We learned, among other things, that the seeds of that pernicious system of segregation were sown back in 1913 when South Africa passed the Natives Land Act, which forced the black 80% of the population to live on so-called "native reserves," which made up only 13% of the land. Ostensibly designed to protect native culture, the real purpose of the law was to generate cheap labor for South African industry, since the natives, who had a primarily agrarian economy, couldn't support themselves on such small amount of land-and were legally forbidden to farm elsewhere.

Noted writer and director Tazewell Thompson (the production's Kurt Weill Mentor) recalled his experiences directing the show for Cape Town Opera in South Africa (pictured above)  and how the issues it deals with--racial separation and the fear it generates--resonate in America today. He reminded us that Alan Paton's "Cry the Beloved Country," the celebrated novel on which "Lost in the Stars" is based, was actually banned in South Africa for many years.

Director Shaun Patrick Tubbs observed how his approach to the show is informed by the work Thompson and others have done before him. Baritone Kenneth Overton reflected on how his view of the role of Rev. Stephen Kumalo, the black preacher who tries and fails to save his son Absalom from the hangman's noose, has changed since he did the role nine years ago. And Mezzo Krysty Swann talked about the vocal and dramatic challenges of her role as Irina, the woman whom Absalom loves and marries.

Hosted by KETC's Ruth Ezell, the event included some valuable comments from the floor. Most notable was a recollection by a member of the Dunham Foundation board of directors of the time he saw the original cast of "Lost in the Stars" perform at the American Theater in 1950. The American was segregated at the time, with black patrons relegated to the top balcony. But Todd Duncan, who was playing Stephen Kumalo, demanded that black patrons be allowed into the first balcony. A brief story in the Post-Dispatch carried the headline "American Theater eases color line for one show."

Preview events continue on Wednesday, August 8, at 6 pm with a brief concert of selections from the opera featuring Mr. Overton and Ms. Swann at Centennial Christian Church, 4950 Fountain in north St. Louis. You can also hear music from the opera on Thursday, August 9--this time with tenor Roderick George, who sings the role of Leader, joining Ms. Swann--as part of Union Avenue's Opera's Open House at Centro Modern Furnishings, 4727 McPherson in the Central West End.

If you missed the panel discussion, you can still get plenty of deep background on "Lost in the Stars" at Union Avenue's Friday Night Lecture Series on August 17th and 24th at 7 pm. Dr. Glenn Bauer will discuss the opera's history and give you a sneak peak at the upcoming performance.

I should note that I'm not exactly a disinterested party in all this. As many of you may know, I have been an actor and singer for about as long as I have been a music and theatre critic, and as it happens I'm performing in "Lost in the Stars" in the non-singing role of Mark Eland. Watching this remarkable work come together has been gratifying, to say the least.

More information on "Lost in the Stars" is available at the Union Avenue Opera web site.