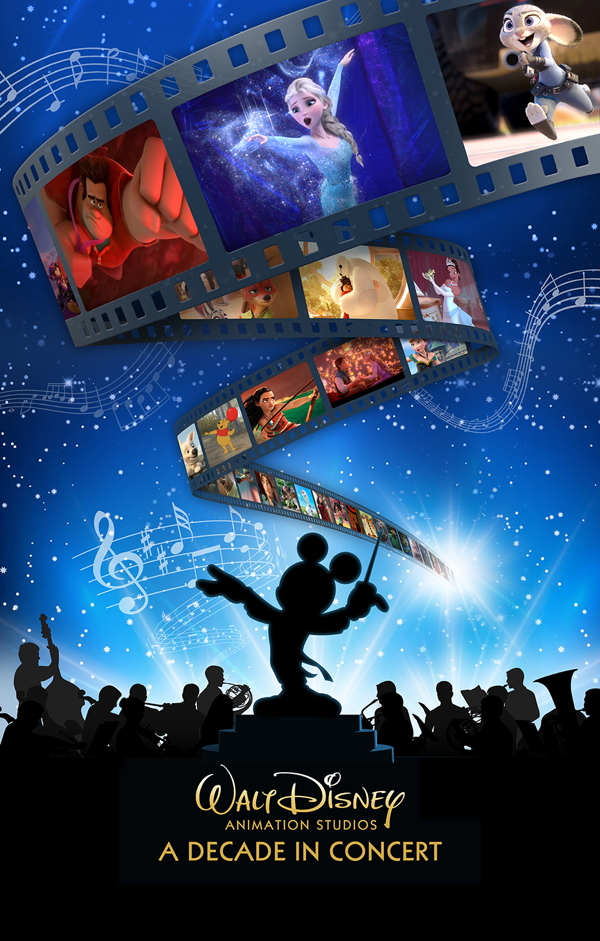 'Merrie melodies' at the St. Louis Symphony with 'Walt Disney Animation Studios: A Decade in Concert'

It's always nice to have a big, family-friendly event at this time of the year, and this weekend Grand Center played host to a pair of them: the musical "Anastasia" at the Fox and, just up the street at Powell Hall, "Walt Disney Animation Studios: A Decade in Concert."

I reviewed the former a couple of days ago. Last night (Friday, December 28) I had the pleasure of watching the latter as, under the expert direction of Resident Conductor Gemma New, an expanded roster of St. Louis Symphony Orchestra musicians (eighty of them, including Steve Schenkel and Kirk Hanser on electric guitar and Kelly Karamanov on synth) delivered slam-bang performances of music from a dozen recent Disney animated films while selections from movies played on the big screen above them. I found it delightful, and I've never even seen most of those movies; for the many fans, young and old, in the audience, it was obviously a bit of pure heaven.

The clips were artfully selected, so that even a relative newbie like me (I had seen only two of the twelve films) was able to get a feel for the story lines. The clips also represented a nice variety of animation styles, from the mid-1960s feel of "Winnie the Pooh" (2011), to the early-1990s look of "The Princess and the Frog" (2009) with its emphasis on caricature, to the more common 3-D design of "Moana" (2016) and the other films in the program.

There was plenty of variety in the music as well. I especially enjoyed Randy Newman's score for "The Princess and the Frog," with its pastiches of early 20th-century sentimental tunes, ragtime, and Dixieland, as well as Mark Mancia's percussion-heavy music for "Moana." Principal Percussionist Will James and the rest of his crew got quite a workout on that one.

Alan Menken's Celtic-themed score for "Tangled" (2010) generated plenty of excitement, and the comic hijinks of "Winnie the Pooh" were vividly illustrated by the equally comical score by Henry Jackman. And it's always a pleasure to hear the music Robert Lopez wrote for "Frozen" in 2013. "Let It Go," the Big Hit from the film, got a virtuoso performance (not credited, I'm sorry to note) by St. Louis's own Debby Lennon as the evening's encore.

All too often, phrases like "family entertainment" and "recommended for all ages" are euphemisms for "dull and unimaginative," as though children were simply very dim adults who could only be trusted with the performing arts equivalent of safety scissors. "Walt Disney Animation Studios: A Decade in Concert" was, I'm happy to say, none of those things. The little princesses (and princes) in the audience were obviously having a great time, as were the adults accompanying them. Let's hope some of them come back when the regular concert season resumes next month.

Next at Powell Hall: Former Resident Conductor Ward Stare returns to lead the orchestra and soloists in the BMO Private Bank "New Year's Eve Celebration" on Monday, December 31. As always, the actual program won't be known until the concert starts, so expect lots of surprises and even some Mystery Guests, musical and otherwise.