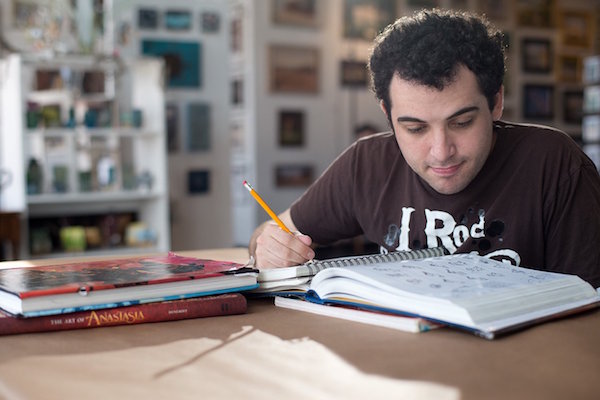 Life, Animated peers into a life graduatedRarely has a title been more symbolic. Owen Susskind's life was opened by the animation films of Walt Disney. Susskind is now 23, but at three, his world was closing in, snuffed by autism. Then, he started connecting with Snow White and Iago and Pinocchio as animated by the Walt Disney Studios.

His father, Ron Susskind is a story-teller. More precisely, he is a Pulitzer-Prize-winning reporter. Susskind pére wrote the story of Susskind fils upon which this excellent documentary is based. But the film goes beyond an examination of Owen's struggle to join his family. The documentary follows Owen to graduation and then to settling into his own assisted-living apartment.

Director Roger Ross Williams gives color to the documentary by incorporating the very Disney films that made Owen's life animated. Williams added Susskind family films to show the contrast between Owen's first three years as a charming toddler, baby brother to Walter, both beloved children to Ron and Cornelia. The family films show Owen's withdrawal as well as his emergence.

But the documentary also shows Owen's use of his imagination in stories he wrote and illustrated. The film shows his manly efforts to make friends in his Disney film club. It reports on the day that John Freeman, who voiced Jafar in Aladdin, and Gilbert Gottfried, who voiced Iago, joined Owen and his friends, all repeating the words of the script in chorus. It also shows Owen's triumphant speech--in English and French--before a French body of therapists learning about autistics' passions.

Williams adds interviews with the Susskinds, mother and father and brothers as well as with Owen's therapist. The interviews reveal the tears and sadness, the joy and hopes of this family. The documentary packs a wallop of compassion and intelligence. Playing at Landmark Theatre's Plaza Frontenac location.