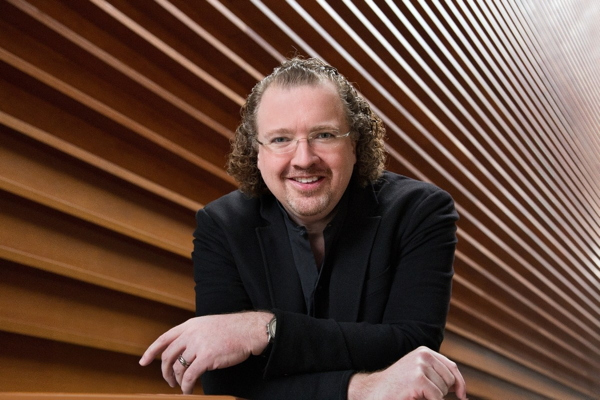 When I first saw St. Louis Symphony Orchestra Music Director Designate Stéphane Denève conduct the orchestra back in the spring of 2003 I found him an impressive figure: tall and commanding without appearing overbearing, and with a bit of the late Leopold Stokowski's flair. Watching him conduct a program of Britten, Haydn, and Tchaikovsky, I noted his close communication with the musicians and how much they appeared to enjoy working with him.

"I don't know whether or not Stéphane Denève is being considered for the Music Director post at the SLSO," I wrote at the end of my critique. "If so and if this was an audition, I'd say he passed it with flying colors."

That looks a bit prescient now, albeit around sixteen years late.

This weekend (February 8-10), Mr. Denève is making his second appearance with the orchestra this season, with an evening of music by Mozart, Vaughan Williams, and Brahms. The concerts open with a performance of Mozart's 1787 Serenade No. 13 for strings, a.k.a. "Eine Kleine Nachtmusik," a work so well-known that most of the audience could probably hum it all the way through--and yet, as Mr. Denève notes in comments for the program, he has never conducted it before.

"I try to always serve the composer," he reflects. "With Mozart this goal is difficult, as the music is perfect in itself, so one always notices if the ego of the performer is in the way." Based on what I have seen of Mr. Denève's work to date, I think that is unlikely to be an issue. It will, in any case, be interesting to hear what amounts to his first public thoughts on this popular classic.

Up next will be a pair of purely lovely short works by Ralph Vaughan Williams: "The Lark Ascending" and the "Serenade to Music."

A romance for violin and orchestra, "The Lark Ascending" has its origins in 1914 while the composer was strolling along the seaside cliffs in Kent. It was not completed, however, until the composer returned from his service in the war disillusioned and with what would prove to be progressive hearing loss. By the time "The Lark Ascending" had its first performance in 1921, it had turned into a wistfully nostalgic look back at a bucolic way of life shattered forever by the winds of war.

The piece takes its title from an 1881 poem of the same name by George Meredith that describes the characteristic way skylarks spiral up into the sky while singing. Meredith heard a kind of pantheist divinity in the lark's song that seems to have resonated with the composer, even though he was a devout Christian. Many have since heard a metaphor for the soul's climb to heaven in the way the work's lovely melody floats and, in the end, slowly fades into silence as it makes its final ascent.

The full poem is 122 lines long, but here are the lines Vaughan Williams chose to accompany the score:

He rises and begins to round,
He drops the silver chain of sound,
Of many links without a break,
In chirrup, whistle, slur and shake.

For singing till his heaven fills,
'Tis love of earth that he instils,
And ever winging up and up,
Our valley is his golden cup
And he the wine which overflows
to lift us with him as he goes.

Till lost on his aerial rings
In light, and then the fancy sings.

The part of the lark this weekend will be played by SLSO Concertmaster David Halen.

Mr. Halen's violin is also the first thing heard in the next work, the "Serenade to Music" from 1938. Composed as a tribute to the noted British conductor Sir Henry Wood on the occasion of the 50th anniversary of his first concert, the "Serenade" is scored for a small orchestra and a group of sixteen solo singers.

Why sixteen? Because the singers who performed the work at its premiere were noted British vocalists selected specifically by Vaughan Williams and Wood. In fact, the published score has the initials of each singer next to his or her lines. Recognizing the difficulty of coming up with sixteen soloists, the composer would later create arrangements for four soloists and/or choir, but this weekend we'll hear the original version with sixteen stellar vocalists from the SLSLO chorus.

The text of the work comes from Act V, Scene 1, of Shakespeare's "Merchant of Venice." In the play, the lines belong to the eloping lovers Lorenzo and Jessica, as they sit on a grassy bank and reflect on the importance of music. "How sweet the moonlight sleeps upon this bank!" cries Lorenzo. "Here will we sit, and let the sounds of music / Creep in our ears: soft stillness and night / Become the touches of sweet harmony." The sheer beauty of the work is supposed to have moved the composer Rachmaninoff to tears when he heard it at its 1938 premiere.

I first encountered the "Serenade to Music" as "filler" on a Columbia recording of Vaughan Williams's angry and despairing Symphony No. 4 by Leonard Bernstein and the New York Philharmonic. The performance had been recorded live at the opening of the orchestra's new home at Avery Fisher Hall in September, 1962. Coming after the final anguished chords of the symphony, the "Serenade" was like a breath of fresh air--a sudden flood of peace and beauty after a musical depiction of the horrors of war. This weekend, the "Serenade" will be played attacca, i.e., immediately following "The Lark Ascending," as though the lark had returned to earth to help pay tribute to "the touches of sweet harmony."

Concluding this weekend's concerts will be a symphony with one of the sunniest final movements you will ever hear: the Brahms Symphony No. 2, written and first performed in 1877. Indeed, as James Keays writes in program notes for the Redland Symphony, the Second "is one of the most cheerful of Brahms' mature works, so much so that it is often called his 'Pastoral,' an obvious reference to Beethoven's symphony of the same name."

The comparison is an apt one since Brahms, like Beethoven, loved nature and often drew inspiration from it. "Throughout his life," writes Tim Munro in this weekend's program notes, "nature helped him return to equilibrium, an equilibrium lost in the bustle of the city. Raised in a hard-scrabble part of Hamburg, he took long walking trips with his family. Later, escaping Vienna meant he could breathe and be alone with his thoughts."

The escape that led to the Second Symphony was to the Austrian town of Pörtschach am Wörthersee. Brahms loved the place and rhapsodized that "the melodies flow so freely that one must be careful not to trample on them." He rented two small rooms for himself at the village that summer, and if his correspondence is an indication, he couldn't have been happier, as Philip Huscher writes in notes for the Chicago Symphony:

The rooms apparently were ideal for composition, even though the hallway was so narrow that Brahms's piano couldn't be moved up the stairs. "It is delightful here," Brahms wrote to Fritz Simrock, his publisher, soon after arriving, and the new symphony bears witness to his apparent delight. Later that summer, when Brahms's friend Theodore Billroth, an amateur musician, played through the score for the first time, he wrote to the composer at once: "It is all rippling streams, blue sky, sunshine, and cool green shadows. How beautiful it must be at Portschach."

Listening to the symphony again recently, I was struck by the sense of serenity, openness, and good humor in the piece. I was also struck, once again, by the similarity between the second theme of the first movement and Brahms's famous "Lullaby" ("Wiegenlied" in German) from 1868. Whether that was intentional or not is hard to say but, as Dick Strawser of the Harrisburg Symphony points out in a 2010 blog post, Brahms does report that the rooms where he was staying in Pörtschach am Wörthersee were near the summer home of Bertha and Arthur Faber, the couple for whom he wrote the "Wiegenlied" in the first place. Personally, I like to think that it was a genial nod to his friends and to the joy he felt in composing this cheerful work.

The Essentials: Stéphane Denève conducts the St. Louis Symphony Orchestra and Chorus, along with SLSO Concertmaster David Halen, Friday at 10:30 am, Saturday at 8 pm, and Sunday at 3 pm, February 8-10. The concerts take place at Powell Symphony Hall, 718 North Grand in Grand Center.