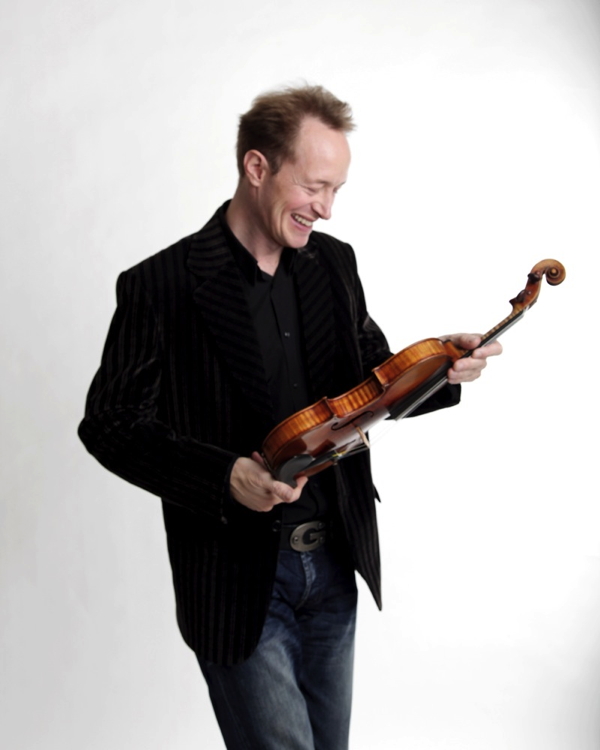 "The Germans," observed the great violinist Joseph Joachim, "have four violin concertos. The greatest, most uncompromising, is Beethoven's." And it's the centerpiece for this weekend's performances by the St. Louis Symphony Orchestra (March 15-17) with Anthony Marwood conducting and doubling as the soloist.

Like many of the great 19th century composers, Beethoven wrote only one concerto for the violin, but--as Mr. Joachim observed--it's a corker. He was, unfortunately, so tardy in completing it that the soloist at the work's 1806 premiere, Franz Clement (for whom Beethoven had written the piece) had no time to rehearse and might have even been obliged sight read the thorny solo part.

The premiere took place on December 23, 1806, at the Theater an der Wien as part of what Brockway and Weinstock, in the 1967 edition of their chatty "Men of Music," call "a singular program":

[The concerto's] first movement was a feature of the opening half of the entertainment, and the second and third movement were given during the second half. Intervening was, among other compositions, a sonata by Franz Clement, played on one string of a violin held upside down.

They go on to note that "it is surely no wonder that, produced under these circumstances, it was a failure. It was at once pronounced insignificant and went immediately into exile from the concert hall." Indeed, the concerto didn't begin to enter the standard repertoire until nearly two decades after the composer's death, and then to a great degree because it was relentlessly championed by Mr. Joachim, who first played it in 1844 (at the age of 12) at a concert in London with Felix Mendelssohn at the podium. Joachim also wrote cadenzas for the work that are still frequently performed.

Now, of course, the concerto is recognized as a masterful blend of solo showpiece and symphonic statement, with a substantial first movement that accounts for over half of the concerto's 45-minute running time, a mostly serene second, and a cheerfully flashy third.

There is, interestingly, a rarely heard alternate version of the Violin Concerto. As Michael Rodman writes at Allmusic.com:

At the prompting of Muzio Clementi -- one of the greatest piano virtuosi of the day aside from Beethoven himself -- Beethoven later made a surprisingly effective transcription of the violin concerto as the unnumbered Piano Concerto in D major, Op. 61a, famously adding to the first movement an extended cadenza that employs tympani in addition to the piano.

The revised concerto was first performed in Vienna in 1807, but despite the occasional high-profile recording like the one Peter Serkin did with Seiji Ozawa and the New Philharmonia in the late 1960s, it remains, as the reviewer of that release notes at Classics Today, "a curio."

Also on the program this weekend is another Beethoven work for violin and orchestra, the "Romance No. 2" in F major. Published in 1805 but written around 1798, it's the work of a young composer who had yet to break free of the Classical tradition. His first symphony was still a year in the future and it would be another five years before his "Eroica" symphony shook the world. "His radical new voice hadn't emerged yet," writes the anonymous annotator for the Baltimore Symphony , "and the model for his music was Mozart and certain French composers of the period."

The one non-Beethoven piece on the program this weekend is Haydn's Symphony No. 44 in E minor. It's known as the "Treuer" ("mourning") symphony because of the contemplative tone of the Adagio third movement. Haydn liked it so much that he supposedly asked that it be played at his funeral. It's one of several symphonies he wrote that were inspired by the Sturm und Drang ("storm and stress") movement in 18th century German literature and music that emphasized drama and conflict.

A symphony that not only began but also ended in a minor key was unusual at the time--even more so when it was as dramatic as this one. Matthew Rye, in liner notes for Roy Goodman's recording with the Hanover Band describes the symphony this way:

The tense opening movement sums up Haydn's Sturm und Drang style with its fierce contrasts of dynamics, urgent semiquavers and, towards the end, a brief passage combining contrapuntal imitation with tonality-destabilising chromaticism. Counterpoint is again to the fore in the Minuet, a strict canon between upper and lower strings. The brighter mood of the major-key trio prepares the way for the Adagio, a movement which provides the calm contemplation lacking in the first movement. The finale is one of Haydn's most remarkable, a movement brimming with nervous energy that is the embodiment of "storm and stress."

Conductor Kenneth Woods has even gone so far as to describe it as "a work conceived in fire and bathed in blood."

Fortunately for Haydn, he had a secure job at the time as Kapellmeister for the Esterházy family, where he had considerable artistic freedom. "The Esterházy princes," according to Good Old Wikipedia, "were musical connoisseurs who appreciated his work and gave him daily access to his own small orchestra. During the nearly thirty years that Haydn worked at the Esterházy court, he produced a flood of compositions, and his musical style continued to develop."

Back at the top of the article, I said that Anthony Marwood is this week's soloist as well as conductor. He's also this week's concertmaster (or leader, as they say in his native Britain)--which is not as unusual as you might think. Until relatively recently in Western musical history it wasn't at all odd for the conductor to also be an instrumentalist--most commonly the keyboard player. Handel, for example, got his first big break as an opera composer (Almira, which he wrote in 1705 at age 19) in part because he had the very visible job of harpsichordist/conductor at a theater in Hamburg.

How will this change your experience of the music? Here's what Helen Kim (at the time a member of the SLSO's first violin section) had to say in anticipation of Mr. Marwood's upcoming appearance with the orchestra in an all-Mozart program in October 2013:

Performing this way tends to open up your ears. We get used to a certain dynamic with conductors, but when there's not somebody with a baton the whole time you have to be very alert aurally to much more subtle cues. It usually results in a more cohesive string sound. There's more interaction between sections. You'll see more eyes looking around, the musicians tracking each other.

As I wrote in my review of that concert, that's probably the closest we'll ever get to experiencing what an orchestral concert was like back in Mozart's day, when the conductor was not necessarily separate from the band.

The Essentials: Anthony Marwood conducts the St. Louis Symphony Orchestra and plays the violin solo in Beethoven's Violin Concerto and Romance No. 2 for Violin and Orchestra Friday and Saturday at 8 pm and Sunday at 3 pm, March 15-17. The program also includes Haydn's Symphony No. 44. The concerts take place at Powell Symphony Hall, 718 North Grand in Grand Center.