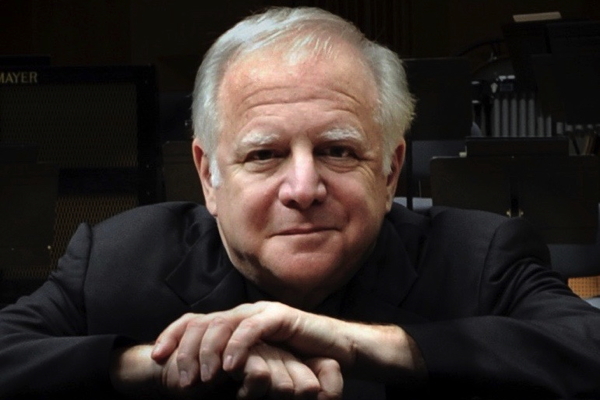 The evening air was crisp and so was the playing of the St. Louis Symphony Orchestra (SLSO last night (Saturday, October 12) as Conductor Laureate Leonard Slatkin led the band in an entertaining and expertly played program of music that spanned nearly 250 years.

The concert opened with a new version of a piece that Mr. Slatkin originally commissioned in 1996, his final year with the orchestra. As a kind of farewell present, he asked four composers who had been in residence at the SLSO during his tenure--Joseph Schwantner, Joan Tower, Donald Erb, and Claude Baker--to each create a different variation of the "Caprice No. 24" by Niccolò Paganini. Slatkin wrote one of his own as well and titled the result "Yet Another Set of Variations (on a Theme of Paganini)."

As Mr. Slatkin approached his 75th birthday he thought a revision might be in order. The new version has the same title as the original but it now has thirteen short movements by a dozen composers (including Mr. Slatkin) that's just under 20 tremendously entertaining minutes in length. The wide emotional range of the suite runs from the solemnity of Truman Harris's "Sarabande" (featuring the bassoon, Mr. Harris's instrument) and the drama of John Corigliano's "Apotheosis (:90)" (referring to the fact that each variation was supposed to run between 60 and 90 seconds) to the Spike Jones-ish comedy of Mr. Slatkin's "Introduction, Theme, and Variant (with apologies to S.R.)."

The latter makes fun of the most famous set of Paganini variations--the "Rhapsody on a Theme of Paganini" by Sergei Rachmaninoff (i.e. "S.R") as does Mr. Slatkin's "Quodlibet and Finale," which references all the other composers involved and includes Kelly Karamanov playing the Rachmaninoff's famous 18th variation offstage from what sounded like on old upright piano.

Mostly, the work was about colorful orchestration, musical in-jokes, and a general sense of fun. Donald Erb's "Ave Atque Vale L.S." sounds like an intoxicated after-party. Film and television composer Daniel Slatkin (son of Leonard) covered an impressive number of musical movie memes in his "Paganini Goes to the Movies." And William Bolcom's "Presto scherzando" sounds like a soundtrack for Mr. Toad's Wild Ride.

"Yet Another Set of Variations (on a Theme of Paganini)" also sounds like a wild ride for the musicians, who are inundated with what were clearly virtuoso passages. Needless to say, the members of the SLSO pulled it off with their customary assurance.

Speaking of assurance, SLSO Principal Oboe Jelena Dirks displayed plenty of that in a graceful rendition of Mozart's one and only Oboe Concerto that honored what program annotator David Garrett accurately calls the "galant manner" of the piece. And she did it with sparkling precision and a good sense of what Donald Francis Tovey (as cited by Mr. Garrett) saw as the operatic underpinnings of the concerto. The "Adagio non troppo" second movement, for example, could easily be a little love song from one of Mozart's comic operas, and the "Rondo: Allegretto" finale actually quotes a tune from "The Abduction from the Seraglio." Ms. Dirks's oboe sweetly sang the former and skipped cheerfully through the latter.

As a bonus (and something of a reference to the work that opened the concert), Ms. Dirks finished each movement with a cadenza written by a different composer. So we had John de Lancie (long-time Principal Oboe of the Philadelphia Orchestra) for the first movement, English oboist Melinda Maxwell for the second, and John Mack (also a former Principal Oboe with the Philadelphians) for the third.

The concert concluded with a glorious, wide-screen, hi-def performance of Richard Strauss's colorful and rousing tribute to himself, "Ein Heldenleben" ("A Hero's Life"). Maestro Slatkin gave it a sweepingly romantic interpretation that did not neglect the fine details of Strauss's inventive use of the orchestra. Richard Freed once observed that "Ein Heldenleben" "represented in its time a new level in the exploitation of the resources of the modern orchestra, and it remains an outstanding landmark in that respect," and you could certainly hear all of that in this utterly compelling performance.

And the SLSO musicians played flawlessly. Big laurel wreathes are especially due to the horns and the massive brass section as a whole, which sounded great, even in the softest passages. It helped that Mr. Slatkin had the brass section spread out across the entire width of the stage, just in front of the percussion, which made it easier to hear the individual sections, even during the rock concert--level din of the "Hero's Battlefield" section.

Concertmaster David Halen had what is essentially the star turn in "The Hero's Companion" section. It's a loving tribute to Strauss's wife, soprano Pauline de Ahna, in which the violin plays the role of Ms. de Ahna, and an emotionally varied one it surely is. In a letter to Romain Rolland (cited by Mr. Freed), the composer described her musical character as "very complex, a trifle perverse, a trifle coquettish, never the same, changing from minute to minute." Mr. Halen neatly captured the character's many moods.

Principal English Horn Cally Banham also had a lovely moment in the transition to the final section, "The Hero's Retreat from the World and Fulfillment," but ultimately the entire orchestra performed heroically under Mr. Slatkin's skilled direction. I'm a sucker for Strauss, granted, but this was nevertheless a well-balanced and unfailingly arresting performance.

Next at Powell Hall: Stéphane Denève returns to lead the orchestra and violin soloist Karen Gomyo in Prokofiev's Violin Concerto No. 1. The program also includes a suite from Poulenc's ballet "Les Biches," and Rachmaninoff's "Symphonic Dances." Performances are Friday and Saturday at 8 pm, and Sunday at 3 pm October 18-20 at Powell Symphony Hall in Grand Center.