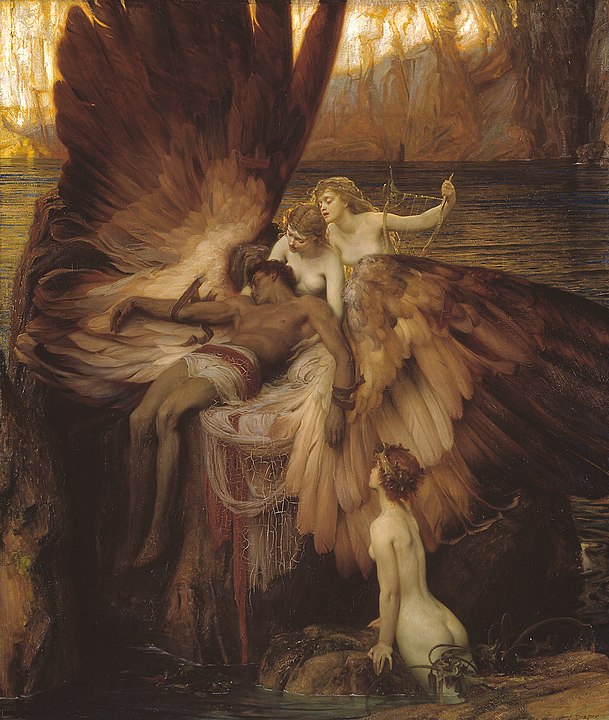 In my previous edition of "Symphony Notes," I talked about the music that was to have been part of Didi Balle's "Maurice Ravel: A Musical Journey", originally slotted for the St. Louis Symphony Orchestra (SLSO) program on Friday, May 1. This time around, I'm going to look at what was originally planned for the concerts on Saturday and Sunday, May 2 and 3.

Conducted by Music Director Stéphane Denève, the program would have consisted of "Icarus" by Lera Auerbach, a contemporary (b. 1973) Russian-born composer who now lives in the USA, followed by Ravel's Piano Concerto for the Left Hand (discussed briefly in my last post), and Shostakovich's overwhelming Symphony No. 10. You can hear the last two pieces on the SLSO's Spotify playlist.

At first hearing, all three works seem very dissimilar. But are they, really?

"The desire to go beyond the boundaries into the ecstatic visionary realm of soaring flight is essentially human," writes Ms. Auerbach in program notes for the Boston Symphony. "In some ways this desire to transcend the everyday-ness is what it means to be human." It's not much of a stretch to see that as the common thread that brings together these three very different works.

"The title Icarus was given to this work after it was written," Auerbach continues. "All my music is abstract, but by giving evocative titles I invite the listener to feel free to imagine, to access his own memories, associations. Icarus is what came to my mind, listening to this work at that time." It came to mind, as well, as I watched the Mark Wigglesworth and National Youth Orchestra of Great Britain perform it on YouTube in a recording made during the Young Euro Festival last year. A tragic figure from Greek mythology whose desire to fly took him just a little too close to the sun, Icarus is not hard to discern in this vividly dramatic piece, which rises to great dramatic heights, only to finally succumb and fall to earth in a great crash of percussion. The quietly elegiac section that concludes the work ends with the soft, eerie sound of a percussionist rubbing her moistened finger along the rim of a partially filled wine glass--a primitive version of Benjamin Franklin's glass harmonica.

The recording by John Fiore and the Düsseldorf Symphony (also on YouTube) is more polished and includes the optional theremin for that extra touch of otherworldliness, but there's an urgency to that live performance that makes it hard to beat.

In lieu of a more detailed description of the piece, you can read Alex Burns's thorough analysis on his Classicalexburns blog or just give it a listen for yourself. One thing you'll likely note is "Icarus" sounds like two pieces--one around three minutes long and one around nine--that have been stitched together. That's because it is, as Mr. Burns points out, the final two movements of Auerbach's 2007 Symphony No. 1 ("Chimera") played back to back. In that respect, Ms. Auerbach is only one of many noted composers (including Bach and Rossini) who have repurposed their own work over the centuries. Think of it as aural recycling.

Ravel's Concerto for the Left Hand is also about transcendence--not for the composer but for the pianist for whom it was written in 1929-1930. That pianist was Paul Wittgenstein (the older brother of the philosopher Ludwig Wittgenstein), who was just at the beginning of what looked like a successful career when World War I broke out. Called up for military service, Wittgenstein was shot in the right elbow during the Battle of Galicia, a major confrontation between Austria-Hungary and Russia. He was captured by the Russians and sent to a POW camp in Siberia where the injury to his arm proved to be so severe that amputation was necessary.

For the vast majority of pianists, that would be a career-ending event, but Wittgenstein was determined to not only resume a normal life but to continue his career as a pianist. The camp had no piano, so, as Dakota White relates at the World War I Centennial web site, Wittgenstein drew the outline of a keyboard on a wooden crate and used it to practice during his confinement. After the war, he was able to use his family's wealth and social connections to commission works for the left hand from leading composers of the day, including Richard Strauss, Erich Korngold, Paul Hindemith, Sergei Prokofiev, Benjamin Britten--and Maurice Ravel.

Wittgenstein gave the work its premiere on January 5th, 1932, with Robert Heger conducting the Vienna Symphony Orchestra and recorded it in 1937 with the Concertgebouw Orchestra under Bruno Walter. You can hear that performance on YouTube as well as on Amazon Prime. The recording on the SLSO play list has Krystian Zimmerman as the soloist with Pierre Boulez conducting the London Symphony, but the Wittgenstein performance is still worth hearing, despite the dated mono sound.

There's a nocturnal feel to the concerto. It's a remarkable piece, with a dark bitonal introduction featuring the contrabassoon (how often does that get a solo?), flashy cadenzas for the soloist, and a central march/scherzo with strong jazz and American pop music echoes. It's as though the composer is inviting us to a dance in the graveyard--a celebration of renewed life in the shadow of the massive death of the "war to end all wars." Ravel served as an ambulance driver in the cataclysm, and I think the horrors he saw influenced many of his post-war works, including this one.

A different set of horrors serves as the background for the Symphony No. 10 in E minor, Op. 93 by Shostakovich. It was first performed by the Leningrad Symphony under Yevgeny Mravinsky in December, 1953, but its genesis began years earlier under the tyrannical reign of Stalin and his cultural spokesman Andrei Zhdanov. In 1948, Shostakovich was denounced for the sin of "formalism"--an amorphous charge that apparently translated as "Stalin didn't understand it"--and so forced to keep his most intimate musical thoughts to himself. Instead he produced film scores and safely banal works like the oratorio "Song of the Forests". It wasn't until after Stalin's death in March 1953 that Shostakovich felt it safe to commit pen to paper.

Reflecting as it does the grim reality of life under Stalin, the Symphony No. 10 isn't easy to love. An often somber and deeply felt reflection on the grim oppression of those years, the 10th is, even by Shostakovich standards, a work of extremes. Moments of crystalline delicacy alternate with vast outpourings of orchestral sound. Deceptively simple-sounding melodic material is spun out in increasingly complex ways throughout the work--a technique known as "metamorphosis" or "thematic transformation," defined by Grove Music Online as "the process of modifying a theme so that in a new context it is different but yet manifestly made of the same elements."

You can hear that most prominently in the long Moderato first movement in which the seminal theme is played softly in the low strings. Over the ensuing 25 minutes or so it rises to a series of progressively more intense climaxes "succeeding one another," as Richard Freed writes in his notes for the SLSO's 1987 recording, "with a Sophoclean sense of inevitability." At times the volume level achieve rock concert intensity--something to bear in mind if you live in an apartment or listen with headphone.

The short Allegro second movement, with its relentless manic energy, was described by the composer as "a musical portrait of Stalin," according to Russian musicologist Solomon Volkov's 1979 "Testimony" (the book's credibility has been questioned, but that quote sounds plausible). The Allegretto third movement is a dance of death, ending with a plaintive statement of the main theme on solo violin.

The Andante; Allegro final movement begins softly, much as the first movement did, but about a third of the way through the mood changes abruptly with a perky theme in the woodwinds. The clouds begin to lift, the sun slowly appears, and the work ends in a glow of hopeful triumph.

The symphony is, in short, a portrait of life in the dark shadow of a frenzied autocrat, ending with a hope for better times after the shadow has passed.

It's a shame we won't get to hear Maestro Denève's take on this piece. The last time the SLSO played it, under David Robertson, the results were stunning. Still, the SLSO has picked a fine performance by Vasily Petrenko and the Royal Liverpool Philharmonic for you on Spotify, and there's a YouTube video with a synchronized display of the score performed by the Moscow Philharmonic Orchestra under Kirill Kondrashin if you want to dig deeper into the music. You can't go wrong either way.