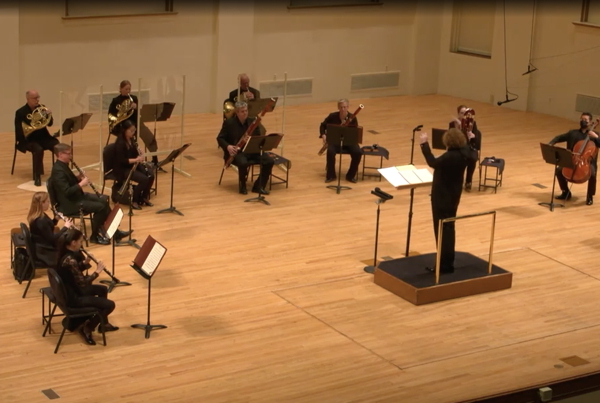 It has been quite an active spring for the St. Louis Symphony Orchestra (SLSO) string section, with a series of both live and on-demand concerts showcasing what Music Director Stéphane Denève has called the “heart of the orchestra.” In the concerts Maestro Denève will conduct this weekend (April 30 through May 3), though, it’s the SLSO winds who will be in the spotlight with a pair of works by Mozart and Richard Strauss.

“This program of wind music,” observes Mr. Denève in the SLSO program notes “is all about opportunity. For Mozart, it was the opportunity to try out a new ensemble and a new sound. For Strauss, this piece was a big break, an opportunity that led to performances by a major court orchestra and a commission from Hans von Bülow, a leading conductor of the day.”

“A big break” is putting it mildly. The Strauss work that opens the concerts is the Serenade for Winds in E-flat major, op. 7. Completed in 1881 when the composer was a mere lad of 17, it’s generally regarded as a remarkably mature-sounding piece for someone who had yet to take his high school final exams. It sat around for a year while Strauss started (with minimal enthusiasm) his university education, but it finally got a premiere on November 27, 1882, by the Dresden Tonkünstlerverein (Dresden Musicians’ Society) under Franz Wüllner.

Given that Wüllner was an old friend of Strauss’s father, that might not have been all that impressive, but a repeat performance in 1883 got the attention of the influential conductor Hans von Bülow. Von Bülow added the Serenade to the regular repertoire of the highly regarded Meiningen Court Orchestra (which he had founded)—a gesture that led to what Stefan Schenk calls “an effusive letter of appreciation” from Strauss:

To my immense joy I heard the news from Mr Spitzweg the day before yesterday that it is the intention of your Excellency to perform my Wind Serenade Opus 7 in one of your concerts. I am delighted that such great honour has thus been bestowed upon my little beginner’s piece. – And I would like to express my most heartfelt and sincere thanks to you, esteemed master.

Listening to this friendly seven-minute work, all that might seem like a lot of fuss, but that’s just because Strauss achieved such a warm, welcoming effect without straying significantly from traditional musical structures that date back to Mozart—whom Strauss very much admired. Indeed, Strauss’s instrumentation is very close to Mozart’s; he just cuts back on the clarinet family and adds a couple of flutes for a brighter sound. You can hear that clearly in the performance by members of the University of Michigan Symphony Band on YouTube.

Which brings us to Mozart. His Serenade No. 10 in B-flat major, K. 361 (370a) takes up the rest of the program. It picked up the nickname "Gran partita" because that title was added to the manuscript after the fact by a hand clearly not Mozart’s. Presumably it’s a comment on the work’s length (around 45 minutes, with seven movements) as well as the size of the ensemble (12 winds and a double bass).

That’s not large by contemporary standards, of course, but consider that back in Mozart’s day a harmonie (wind ensemble) usually consisted of around a dozen musicians playing pleasant background music for aristocratic garden parties. The harmonie of Emperor Joseph II, for example, “set the gold standard foraristocratic entertainment.” By doubling the size of the band and writing a work of symphonic proportions, Mozart was breaking new ground.

That said, there’s a lot about the origins of this work that are, to say the least, unclear. “The Serenade No. 10 in Bb Major,” writes David Stanley “is both well-known and a mystery”:

We will likely never know the exact date of composition for this serenade.  Scholars have examined a wide variety of sources: Mozart’s manuscripts, the type of paper he used, his thematic catalog, works composed at the same time, correspondence between other musicians—nothing is conclusive.  We know Mozart was in his late twenties and that the piece, or part of it, may have been premiered in Vienna on March 23, 1784

What we can say, just from listening to it, is that it goes well beyond the bounds of simple background music for the idle chatter of the well-born. The opening Largo—Allegro molto fills the standard sonata form with nobility and good humor. The two Menuetto movements are eminently danceable despite being longer and more elaborate than would have been typical for a serenade back then. The Tema con Variazioni sixth movement assigns a different pair of woodwinds to each variation, giving everyone a chance to show off. And the exuberant Finale, in the words of Dr. Michael Fink, “adds a finale on top of a finale. The clipped repeated sections of this rapid Rondo tumble forward impetuously.”

The Adagio third movement has become especially well known, thanks in part to Peter Shaffer’s play “Amadeus.” Shortly after meeting Mozart for the first time and finding himself appalled by the composer’s loutish behavior, Antonio Salieri hears the opening of the Adagio and is thunderstruck by its profundity:

It started simply enough: just a pulse in the lowest registers—bassoons, basset horns—like a rusty squeezebox. It would have been comic if not for the slowness, which gave it a kind of serenity. And then, suddenly, high above it, sounded a single note on the oboe. It hung there unwavering, piercing me through, until breath could hold it no longer, and a clarinet withdrew it out of me, and sweetened it into a phrase of such delight it had me trembling…It seemed to me that I was hearing the voice of God…and it was the voice of an obscene child! [from “Amadeus,” 2003 revision]

If you know the play, you also know that this is not a happy revelation for Salieri.

One more cool thing about the “Gran Partita” is that it offers a rare opportunity to hear an instrument popularized by Mozart’s friend and fellow Mason Anton Stadler: the basset horn. Essentially a larger version of the clarinet with a more powerful low end and a darker tone quality, it looks a bit like a cross between a clarinet and a sax, especially in the elegant format offered by Buffet Crampton of Paris. Playing the basset horns this weekend will be SLSO E-flat clarinetist Ryan Toher and guest musician Jane Carl.

You can experience that Adagio along with the rest of the Serenade No. 10 in any number of ways on YouTube. If you want just the music with a synchronized display of the score, there’s this 1994 recording conducted by Sir Charles Mackerras. If you’d prefer a live performance, The Orchestre Philharmonique de Radio France has one for you recorded on March 7, 2016, at the Auditorium of Radio France. Personally, I prefer the latter (they appear to be playing those cool Buffet Crampton basset horns, for one thing), even though there is much to be said for being able to read the score along with the players.

The Essentials: Stéphane Denève conducts members of the SLSO winds in the Serenade for Winds in E-flat major, op. 7 by Richard Strauss and the Serenade No. 10 in B-flat Major by Mozart. Performances are Friday at 11 am, Saturday at 7:30 pm, and Sunday at 3 pm, April 30 through May 2, at Powell Symphony Hall in Grand Center. Only 300 tickets will be sold for each performance and strict health protocols will be in place. For more information, visit the SLSO web site.