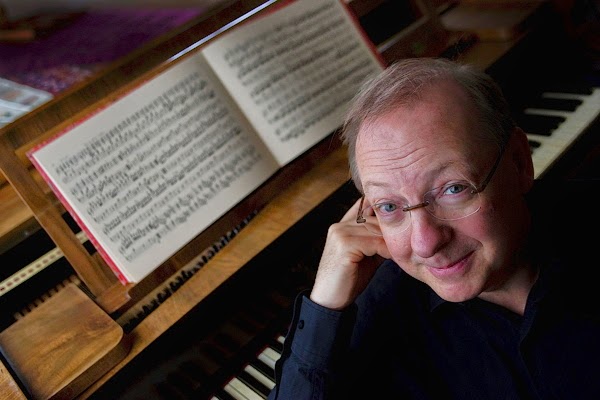 Friday night (December 3rd), Powell Hall was decked out in holiday finery as frequent guest conductor Nicholas McGegan led the St. Louis Symphony Orchestra (SLSO) in a trio of performances that delivered a preholiday gift to music lovers: a box of Bachs.

The Bachs in question were the well-known Johann Sebastian and his son Carl Phillip Emmanuel. The second of the many Bach children to survive to adulthood, Carl Philipp Emanuel (henceforth C.P.E. for the sake of brevity) was the first to eclipse his dad in fame. Indeed, by the time he started making a name for himself as a performer and composer in the 1740s, his father was already starting to be regarded as old fashioned. When Mozart remarked to his patron Gottfried van Swieten that “Bach is the father. We are the children,” he was referring not to J.S. but to C.P.E.

The first half of the concert consisted entirely of works by the younger Bach: two symphonies (or sinfonias, to use his term) and an A major cello concerto. The latter started out life as a flute concerto, presumably intended for the composer’s employer King Frederic of Prussia, who was by all accounts a pretty decent flute player.

In an interview last month, McGegan described C.P.E. Bach’s music as “very daring, full of surprises. Sometimes very hard-driven. But also full of Empfindsamkeit is what the Germans call it, sensibility. It wears its heart on the sleeve.” And, indeed, all three works on the first half of the program had an almost Romantic feel to them at times—dramatic, sentimental, fiery, and altogether different from the music of his father. You can hear the Baroque roots of these works as well as anticipations of the symphonies of Mozart and even Beethoven, as though C.P.E. were building bridges to a musical future he would not live to see.

The opening Sinfonia in C major (1773) for strings is a good example of the composer’s wide emotional range. There’s an energetic first movement with unexpected pauses, a grave second movement in which the violins are nearly weeping, and a happy, hopping Allegretto finale. The SLSO strings delivered all of it with flair under McGegan’s meticulous direction.

Next, SLSO cellist Yin Xiong took the lead in the concerto with a flawless performance that provoked spontaneous applause from the audience. Her playing of the rapid passages was crisp and clear, and she showed great depth of feeling in the more weighty moments. The second movement cadenza was especially powerful in that regard.

Members of the wind section joined the orchestra for the 1756 Sinfonia in E minor that concluded the first half of the evening, with outstanding work by Andrea Kaplan and Jennifer Nitchman on flutes, Jelena Dirks and Cally Banham on oboes, and Victoria Knudsen and Associate Principal Thomas Jöstlein on horns. The latter didn’t have a large role but it was  a critical one, providing pointed interjections in the first and last movements. They didn’t play often, but when they did, they had to be sharp and precise—which they were.

Bach der Vater took up the rest of the evening with the first and sixth of his Brandenburg Concertos. Written when Bach was the music director and resident composer at the court of Prince Leopold of Anhalt-Cöthen (1717 to 1723), each of the concertos highlights a different group of instruments. Taken as a set, they show off Bach’s skill as a composer—which is what he had in mind when he sent them as, essentially, a job application to the Margrave of Brandenburg almost exactly 300 years ago. The Margrave ignored them, and they sat gathering dust until 1850 when they were finally published.

The Concerto No. 6 is written for the unusual combination of two solo violas, accompanied by cellos and bass. The lower voices give the music a rich, velvety darkness and the small size of the ensemble (six players) ensures that the intricate interplay among the viola soloists and the principal cello is clearly heard.  “I'm sure Bach wrote this for himself to play with a mate,” McGegan noted, “because it's definitely very intimate. It's a musician's piece…written for six or seven musicians to have a good time.”

Violists Beth Guterman Chu and Andrew François certainly appeared to be having a good time Friday night, as did Principal Cello Daniel Lee. There was a sense of unaffected joy in the way they tossed themes back and forth.  In an SLSO Zoom seminar on November 16th, Chu talked about how the second movement, in particular, felt like an intimate conversation among friends. I thought that was clearly audible Friday night.

The concluding Concerto No. 1 offered a sharp contrast, with a brighter sound, a much bigger band, and solo parts for oboes, strings, and corni di caccia (the valveless horns of Bach’s time; the contemporary valved horn wasn’t invented until 1818). This was probably intended as the real showpiece of the collection, and it got an appropriately flashy performance from McGegan and his players. Julie Thayer and Principal Horn Roger Kaza were for the most part especially strong here, as was Principal Oboe Jelena Dirks, although all the solo players were in excellent form.

McGegan’s direction was insightful as always. I particularly liked the way he brought out the dance elements in the concerto, most notably in the Allegro third movement. McGegan always seems to be having a wonderful time on the podium and that feeling of elation was (if you’ll pardon the word) infectious.

Throughout the evening, guest artist Mark Shuldiner provided a solid musical backbone on the harpsichord. It’s easy, I think, to miss the importance of the continuo instruments in music of this era. That’s especially true of the harpsichord, which isn’t always clearly heard in larger concert halls. That wasn’t the case Friday night, though, so it was possible to both hear and admire his fine keyboard work.

The Bach program concluded the regular concert season for 2021. For the rest of December it will be all holiday music all the time, with programs ranging from showings of “The Muppet Christmas Carol” and (on January 2, 2022) “Up” to the popular “Gospel Christmas” and the holiday pops sounds of the "Mercy Holiday Celebration," which will include extra performances at Lindenwood University. The Bach Society’s annual “Christmas Candlelight Concert” takes place on December 23rd and the festivities conclude with the big "New Year’s Eve Celebration" with two performances at 2 and 7:30 pm. The 2022 season kicks off Friday at 10:30 am and Saturday at 8 pm, January 7 and 8, with music by Brahms, Beethoven, and Detlev Glanert conducted by Stéphane Denève with piano soloist Lars Vogt.