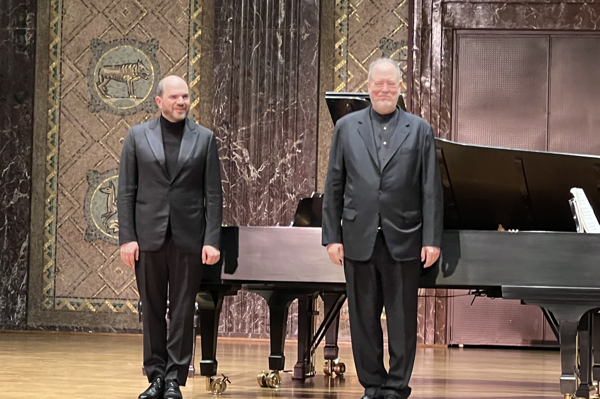 Review: Doubling your piano pleasure with Gerstein and Ohlsson at the 560 Music Center

Pianists Kirill Gerstein and Garrick Ohlsson are no strangers to the St. Louis concert scene. Gerstein, in particular, has been a frequent soloist with the St. Louis Symphony Orchestra (SLSO)—most recently this past fall. Last Sunday (February 27), however, was their first appearance here as a piano duo, courtesy of the Great Artist concert series of the Department of Music at Washington University.

Presented in the Lee Concert Hall at the 560 Music Center, their program was a daring and sometimes quite challenging one for both the performers and, to a lesser extent, for the audience. There were even a few points at which the live acoustics of the hall and the dense textures of some of the music united in a sonic mush.

This was especially true in the opening work, Thomas Adès’s 2009 “Concert Paraphrase” from his 1995 chamber opera “Powder Her Face.” Based on the life of Margaret Campbell, Duchess of Argyll (1912-1993), whose elegant and fashionable life took a bizarre turn after a near-fatal fall down an elevator shaft in 1943 turned her into something of a sex addict, the opera has generally gotten good reviews despite (or maybe because of) the R-rated nature of its story.

I’ve never seen Adès’s opera, but I very much enjoyed the 2017 orchestral suite he assembled from it when the SLSO (one of a collective of orchestras who commissioned it) presented it in 2018. The suite combined loopy, off-kilter versions of popular song styles and dance forms like the tango and waltz with a modern and often discordant harmonic palette to produce a work that was great fun to hear.

Echoes of those song and dance styles are occasionally audible in the earlier work, but are more often overwhelmed by vast, chaotic swirls of sound and incessant metrical shifts which make for thorny listening. Cited in the program notes, critic Anthony Tommasini described the “Concert Paraphrase” as sounding like “outtakes from a recording of a wild piano piece that have been spliced together.” I’d say that about covers it.

All of which makes the performance by Gerstein and Ohlsson that much more impressive. The technical demands of this work sound formidable, even for someone like Gerstein, who has a long history with Adès and has played many of his works over the years. He and Ohlsson deserve the equivalent of a Purple Heart for managing this wildly eccentric work and making it more or less comprehensible.

Next was Rachmaninoff's 1940 "Symphonic Dances." It was the composer's last completed work (he died two years after its premiere), and there's a sense throughout of a life approaching its conclusion. Rachmaninoff had, in fact, originally titled the three sections "Noon," "Twilight," and "Midnight," but he later dropped the titles, preferring to let the music speak for itself. Which it does eloquently. There’s a “late night” feel to the three-movement work, at least in the orchestral version.

The composer’s own two-piano arrangement, written at the same time, doesn’t summon quite the same nocturnal atmosphere, but the sense of autumnal melancholy is still there. So is the affirmation of the final movement, in which a struggle between the “Dies Irae” and the “Resurrection” theme from Rachmaninoff’s 1915 “All-night Vigil” is emphatically resolved in favor of the latter. Gerstein and Ohlsson brought strong, dramatic contrasts to their performance along with an epic sweep and a compelling use of the moments of silence built into the score.

The second half of the concert opened with another challenging work, this time by the Italian pianist/composer/librettist Ferruccio Busoni. A great admirer of Bach, Busoni arranged a number of the Baroque master’s organ works for piano. His 1910 “Fantasia Contrappunistica,” presented Sunday in its 1922 piano duet version, is his ultimate tribute to Bach, combining themes from the earlier composer’s Chorale Prelude “Allein Gott in der Höh sei Ehr” and the unfinished “Die Kunst der Fuge” (“The Art of the Fugue”) with original material by Busoni, including a fugue on the notes BACH (the German version of B-flat, A, C, and B-natural).

Running around 30 minutes with a dozen separate movements, the work’s mix of High Baroque counterpoint and early 20th-century harmonies calls for a mix of heroic technique, artistic sensibility, and clarity of execution. The latter is particularly important if the individual voices are to be clearly heard in the fugues. Here, again, Gerstein and Ohlsson did not disappoint, delineating the complex sonic threads with pellucid clarity without neglecting the composer’s fondness for massive blocks of sound.

The evening concluded with Ravel’s 1920 “La Valse” in what I presume was the arrangement Ravel himself prepared and first performed with fellow composer/pianist Alfredo Casella.  Originally intended as an affectionate tribute to the Viennese waltz, the intervention of World War I and the death of the composer's mother turned it into something much darker. It’s a work that begins in darkness, rises to ecstatic heights, and finally crashes to the ground in what has always sounded to me like the musical depiction of the collapse of the complex structure of 19th-century Europe in the so-called "war to end all wars."

Dynamic contrasts are important in “La Valse.” This is a work that needs to move, in around 15 minutes, from a whisper to a scream. The opening bars should emerge almost imperceptibly from silence. Gerstein and Ohlsson absolutely nailed this, along with all the other nuances of this piece. The increasing giddiness of the waltz themes, the last whimsical moments before all musical hell breaks loose, the cataclysmic finale—it was all there and neatly done.

Finally: one of the more interesting things about the Gerstein/Ohlsson duo is how well they work together despite very different stage presences. Gerstein is a very physically demonstrative performer, often vocalizing inaudibly to himself along with the music. Ohlsson, on the other hand, is more restrained if no less committed in his approach. It made for a nice “fire and ice” balance.

Washington University’s Great Artist series continues on Sunday, April 3, with music by Glass, Pärt, and Ravel performed by the Attacca Quartet. More information on this and other Department of Music events is available at the WUSL Music web site.