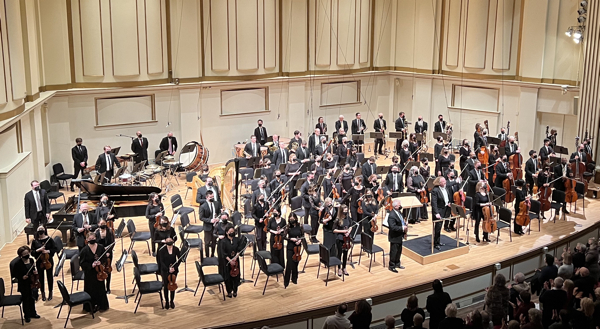 The St. Louis Symphony Orchestra (SLSO) concerts last weekend (April 12 and 13) opened with a pair of local premieres—one of which no doubt came as a surprise to most of the audience as it wasn’t listed in the program.

That unlisted item was “Shche ne vmerla Ukrainas” (“Ukraine Has Not Ye Perished”), more commonly known as the Ukrainian national anthem. Formally adopted in 1991, the anthem has music by priest and composer Mykhailo Verbytsky and a text by poet Pavlo Chubynsky. As Stan Moore wrote in a recent article for the British radio station Classic FM, “one of the world’s mightiest patriotic songs.”

The rousing performance by Stéphane Denève and the SLSO Saturday night certainly demonstrated the truth of that. With all of the musicians and the vast majority of the audience standing in support of the beleaguered nation, it was a moving experience—and a reminder of the “parlous times” [in which we live. English translations of the text vary widely, but this one by Ihor W. Slabicky at the Toronto Ukrainian Genealogy Group site feels extremely relevant right now:

Ukraine's glory hasn't perished, nor her freedom
Upon us, fellow compatriots, fate shall smile once more.
Our enemies will vanish, like dew in the morning sun,
And we too shall rule, brothers, in a free land of our own.

We'll lay down our souls and bodies to attain our freedom,
And we'll show that we, brothers, are of the Kozak nation.

Up next was the scheduled local premiere, which was also a world premiere: the “Goddess Triptych” by contemporary (b. 1969) American composer Stacy Garrop. Written for the SLSO and commissioned by the League of American Orchestras, the work is a brief (15 minutes) suite depicting scenes from the legends of three Hindu goddesses: Durga, Lakshmi, and Ganga. Scored for a massive orchestra with a substantial percussion battery (including a thunder sheet and a LOT of drums), the “Triptych” tells its tales in the kind of vivid detail which would have impressed even Richard Strauss.

“Durga Battles a Buffalo Demon” starts big and gets bigger as the eighteen-armed goddess engages in violent conflict with the fearsome demon. The orchestra unleashes a wild array of sounds, including a semi-musical scraping noise created by strumming the undampened bass strings of a piano. Durga finally beheads the demon in what Denève, in his pre-concert talk, called “the loudest sound I have ever heard from an orchestra,” after which the strummed piano strings have the last word, slowly fading into silence.

In “Lakshmi Sits on a Lotus Blossom,” a contemplative piccolo solo (neatly done by Ann Choomack, who also had some fine moments later in the concert) introduces us to the four-handed goddess of beauty, fertility, and fortune as she meditates serenely in the middle of a lotus blossom. Playing at the top of her register, Principal Harp Allegra Lilly joined Choomack to suggest Lakshmi floating in some ethereal, sparkling light. The brass and percussion sections joined the harp to depict Lakshmi opening her lower two hands to spill gold coins from her palms, after which the meditative mood returned.

In final section, “Ganga Cascades from the Heavens,” the titular personification of the river Ganges dances through the skies to the sound of scurrying strings until Vishnu, in the brasses, kicks a hole in the wall of heaven and Ganga plummets to earth in rapidly descending string figures accompanied by a rainstick. Shiva breaks the fall of Ganga’s massive liquid column and she flows off into multiple melodic streams.

Does this sound like a film soundtrack? Yes, it does; but in a good way. The form of the symphonic poem—music inspired by and descriptive of a non-musical source—has been in decline for far too long. It’s good to see new composers taking it up again, especially when it’s done with the degree of imagination and inventiveness Garrop shows in her “Goddess Triptych.” I was pleased to see that Garrop herself was present Saturday night to share in the richly deserved standing ovation.

The first half of the program ended with music that also has its share of exotic sounds: the Piano Concerto No. 5 in F major, op. 103 (“Egyptian”), written during an 1896 winter trip to the monuments of Luxor by the peripatetic Camille Saint-Saëns. One of the souvenirs he brought back was "a Nubian love song which I heard sung by boatmen on the Nile.” It served as the basis for some unusual harmonic effects in the concerto’s long second movement which, in the composer’s words, “takes us, in effect, on a journey to the East and even, in the passage in F-sharp, to the Far East."

The soloist this weekend was former SLSO Artist in Residence Jean-Yves Thibaudet. He and Maestro Denève have worked together many times in the past, as was apparent in their impeccable collaboration on this work.

Thibaudet demonstrated that he could produce the elegant arpeggios and power chords of the Allegro animato first movement with equal facility. The chromatic passages and the bell-like sounds of the Andante second movement came across with impressive clarity, and the Molto allegro finale overflowed with cheerful energy. Denève was with him all the way leading the musicians in a finely wrought interpretation with excellent sonic balance between soloist and ensemble.

The inevitable standing ovation was followed by a sweet encore: Elgar’s “Salut d’amour.” It was a perfect contrast to the vigor of the concerto’s finale.

After intermission came a double helping of ballet: Paul Dukas’s one act “La Péri” (including its famous brass fanfare) and a suite from Stravinsky’s “L'Oiseau de feu” (“The Firebird”). The two ballets were composed within a year of each other—“La Péri” in 1911 and “The Firebird” in 1910—and were both originally scheduled to be premiered by Sergei Diaghilev’s Ballets Russes in Paris, although only “Firebird” made the final cut.

Based on Persian folklore, “La Péri” is the story of prince Iskender’s theft of the Flower of Immortality from a sleeping peri (a winged female fairy)—an action he comes to regret. The music is lush and suffused with some of same perfume of the cultural phenomenon of Orientalism that you hear in the Saint-Saëns concerto. The score has some very florid and tricky writing for the woodwind section, perfectly executed by the members of the band. The horns covered themselves with glory here, as they did throughout the evening, and the brass section was commanding in the opening fanfare. Denève drew out all the hothouse exoticism of the work in a very persuasive reading of this often neglected music.

The evening that began with the Ukrainian anthem ended with a Russian ballet, which somehow felt appropriate. “Firebird” was the score that put Stravinsky on the map, musically speaking, and it remains one of his most popular works. Stravinsky prepared two concert suites from the ballet: one in 1910 and another in 1945. The noted Swiss conductor Ernest Ansermet also created one in 1919, which the composer later revised. Denève chose the 1919 suite but with the slightly leaner 1945 orchestration.

Conducting without a score, Denève led the orchestra in a genuine rouser of a performance. The opening tempo hit just the right balance of energy and menace with the growling theme in the low strings that will eventually become the glowing, triumphant chords of the finale. The quick woodwind interchanges were meticulous. The big percussion bang that opens the “Infernal dance of King Kashchei” was like a thunderclap, coming as it did after the quiet conclusion of “The Princesses' Khorovod” (round dance). Andrew Cuneo’s bassoon solo in the “Berceuse” was haunting, and the finale was simply resplendent. Its impact was enhanced by the wide dynamic contrast between the hushed opening horn solo (marked dolce, cantabile—“sweet, singing”—and certainly played that way by Roger Kaza) and those fortississimo ( “very loud”) closing notes.

Next at Powell Hall: Stéphane Denève conducts and Jean-Yves Thibaudet returns as soloist for Gershwin’s Concerto in F. The program opens with “Chuphshah! Harriet's Drive to Canaan” by contemporary American composer James Lee III and concludes with Rachmaninoff’s Symphony No. 3. Performances take place Friday at 10:30 am and Saturday at 8 pm, March 18 and 19 at Powell Hall in Grand Center.