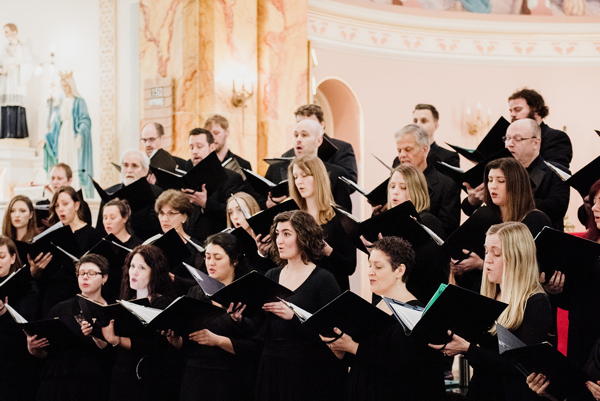 Review: Christmas time is near

This past Sunday (December 18th), the Saint Louis Chamber Chorus performed its annual Christmas-themed concert, "Advent to Christmas," at Union Avenue Christian Church.  From the rich storehouse of choral music about the birth of Jesus Christ, the printed program featured 9 works by 6 composers, with 4 of the composers contemporary.  As with the SLCC’s previous concert at the Ursuline Academy, SLCC artistic director Philip Barnes gave his customary audience welcome at the very beginning of the concert, before any of the music had sounded, rather than after the first work, with the standard request to silence all cell phones, with a quip about not needing to check on the World Cup, since Argentina’s victory was already a done deal.  More seriously, Mr. Barnes emphasized the delicacy of portions of the music to follow, where any cell phone disruption might have caused the chorus to stop the music and start over.  However, another reason to keep cell phones off became apparent:  the church’s HVAC system was completely turned off.  The silence in the space was thus truly palpable.

One thread through the concert was the continued commemoration of the sesquicentenary of the birth of Ralph Vaughan Williams (1872-1958), with 3 of his folksong settings and one original work on Christmas-themed texts.  “The Truth From Above”, the first featured folksong setting and last performed by the SLCC 19 seasons back, made for a very fine opener to set the mood.  The next selection introduced an offshoot theme of other composer’s anniversaries, as the selection was an arrangement of the Finnish carol “Joupupuu on rakenettu” (“The Christmas tree is up”) by Charles Collins (born 1962), an SLCC alum now resident in Michigan, for the first of two 60th birthday salutes in the program.  The liner notes mention that Mr. Collins spent some of his teenage years in Finland, and thus acquired fluency in Finnish.  This shows in his mellifluous setting of the text.  Unfortunately, during this work, one cell phone went off.  Next up was “O Viridissima Virga” (“O greenest branch”), a reworking by the British composer Ivan Moody (born 1964) of a selection by the legendary 12th century nun and mystic Hildegard of Bingen.  This work was an SLCC commission from 18 seasons back, and made a welcome return.

The second Vaughan Williams selection, his arrangement of the folksong “Down In Yon Forest”, featured solos from SLCC veterans Derek Dahlke (tenor) and Kate Glass (soprano), nicely done.  The next work was the second revival of a past SLCC commission, from 5 seasons back, “Dum Medium Silentium”, by the German composer Wolfram Buchenberg (born 1962), the program’s other 60th birthday composer.  Buchenberg’s work was the widest-ranging selection in timbre, range and musical mood, with really deep bass sounds along with stratospheric high passages for the ladies.  Buchenberg isn’t afraid to create a really dark mood, only for a brighter section to appear not long after, while somehow making it all cohere.

The first half closed with the last of the SLCC commission revivals for this concert, “Christmas Bells” by the British composer Sasha Johnson Manning (born 1963, so a milestone birthday year for her is nigh), a past SLCC composer-in-residence.  The two texts were “I heard the bells on Christmas Day” (Choir 1, house left/stage right) and “Ding-dong! Merrily on high” (Choir 2, house right/stage left), each about the ringing of church bells connected to the birth of Jesus Christ.  The idea behind this work is that Ms. Manning juxtaposed the two texts and musical settings in the same piece.  Mr. Barnes first gave a brief demonstration of each choir singing a portion of their assigned carol, before the subsequent “mash-up”, with reference to a comparable process by Stephen Sondheim with three songs from “A Little Night Music”, ‘Now’, ‘Soon’, and ‘Later’, each first heard separately, and subsequently combined much later.  The Sondheim reference had resonance for one particular audience member, Scott Schoonover, UACC’s director of music and artistic director of Union Avenue Opera, which staged “A Little Night Music” just last summer.  Ms. Manning’s work alternated the individual texts for most of its duration, and only fully set the texts “against” each other in the last stanza, a very smart move.

The rest of the concert featured one work, “Die Weihnachtsgeschichte” (“The Christmas Story”) by the German composer Hugo Distler (1908-1942), the most melancholy composer anniversary in this program.  Distler composed this “Christmas cantata” in 1933 (enough said there).  This was the second-ever complete performance of this work by the SLCC, with the first complete SLCC performance 15 seasons back, and this reviewer’s first time ever hearing the work.  Distler used the familiar (and anonymous) carol “Es ist ein Ros entsprungen” (known in English as “Lo, how a rose e’er blooming” or “A Spotless Rose”) as part of his musical inspiration and material, but not simply as it stood.  The work’s structure is reminiscent of the J.S. Bach Passions (though obviously about the birth of Christ here), in its use of an Evangelist as the work’s narrator with individual contributions from such figures as the Virgin Mary (Maria), her sister Elizabeth (Elisabeth), Herod (Herodes), and Simeon, as well as an Angel.

Distler’s work sinks or swims based on the Evangelist, who has by far the most work of the solo singers.  Fortunately, Christopher Boemler, from the bass section of Choir 1, was well up to the job.  Kate Glass (Choir 1, soprano) returned nicely for additional solo duties as the Angel.  Interestingly, one alto, Stephanie Ruggles (Choir 2), sang the Virgin Mary at the outset, but a second alto, Angela Castelli from Choir 1, subsequently joined in, to double the Virgin Mary’s singing line.  Elizabeth, Herod, and Simeon each had one solo, with stalwart work respectively from Christine Guthrie (Choir 2, soprano). Richard Deitte (Choir 2, bass) and John Hubert (Choir 2, bass).

Based on just this one hearing, and speaking only for myself, I don’t know if I would necessarily describe Distler’s work as a “neglected masterpiece”, or some comparable exalted phrase.  His music needs judgment apart from the terrible circumstances of the latter part of his life, living through much of the Third Reich and eventually taking his own life after great emotional strain at what he saw happening in and to his country.  The work is certainly good (and not just “good for a 25-year-old”), and well worth hearing, and all credit to the SLCC for giving St. Louis concertgoers a (second) rare chance to hear the work live.  On the work’s challenges, Mr. Barnes’ program note mentioned its “bewildering array of time signatures”, which did not appear to faze the singers (although the German pronunciation went awry at isolated moments).  Unfortunately again, at least one audience member didn’t observe the post-intermission reminder to turn off or silence cell phones, as another phone went off twice in vibrate mode about halfway through the Distler.  The SLCC and Mr. Barnes, however, kept going, without stopping the music.

After such a demanding, 40-minute work, an encore would seem odd.  However, there were reasons for it.  This was “A Tender Shoot”, a 2020 English-language setting of the same “Es ist ein Ros entsprungen” text by the British composer Kerensa Briggs (born 1991), composed for Wells Cathedral in the UK.  She is the SLCC’s newest composer-in-residence, and has composed a new work for their February 2023 concert, with plans to travel to St. Louis for the world premiere.  Thus serving as a preview sampler of her music, this encore is well-crafted and definitely audience-appealing, and modulated the mood intensity after the Distler, to give a contemplative end to the concert.  It complemented the Distler without displacing it, and made ultimately for a program of 10 works by 7 composers, with 5 of the composers contemporary.  The SLCC was on its standard strong form, for a very fine close to the first half of its current season. Information on upcoming concerts is available at the SLCC web site.