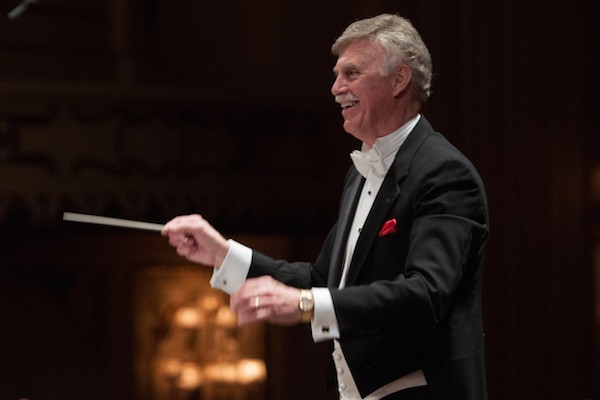 Choral music, particularly when performed by a superb chorus and enhanced by a top-notch orchestra and conductor, can be electrifying. The ocean of sound engulfs the audience, grabbing not only the auditory sense, but the intellect and even the visual sense.  For 76 seasons now, the Bach Society of St. Louis has been providing this experience to enthusiastic audiences in our region. The season opener on October 9, held at the First Presbyterian Church in Kirkwood, was no exception, providing a memorable performance of Mozart's Mass in C Minor, K. 427.

Conductor A. Dennis Sparger, in his 31st season with the Society, has provided solid, recognized leadership and a knowledge of the works performed that goes beyond the mere printed score; in addition to conducting, he writes the program notes for the programs and provides additional items of note from the stage.

One of the challenges faced by directors of combined large ensembles is the need to achieve balance and blend. Both the chorus and orchestra maintained an elegant organic union throughout the performance, never overpowering each other. Under the direction of Sparger and Assistant Conductor Stephen Eros, the chorus sang as one voice, yet contrapuntal sections were clearly distinguishable and well executed.

The first half of the program consisted of Beethoven's "Hallelujah" from The Mount of Olives, Op. 85; Mozart's "Ave Verum Corpus"; "Hallelujah, Amen" from Handel's Judas Maccabeus; the "Laudamus Te" from Vivaldi's Gloria; "Wie will ich mich freusen" (How I Will Rejoice) by Bach; as well as a jewel just for orchestra, the famous "Air in G" by Bach, all conducted by Stephen Eros.  The second half of the program directed by A. Dennis Sparger, was devoted to the Mass in C Minor of Mozart, with his "Regina Coeli," K. 276 as a starter.

Eros brings a similar level of professionalism to the podium as does Sparger -- not always the case with guest conductors! Both men direct with confidence and boldness tempered by sensitivity to the music. Dynamic contrasts were noticeable and well prepared, imparting the same excitement to the hushed pianissimos as the reverberating fortissimo sections. Although tempos are often a matter of personal taste, the tempos selected by both conductors throughout the program seemed just right. It was good to hear the "Air in G" and the "Ave Verum Corpus" performed at tempos ever so slightly brisker than usual, thus adding greater definition and contour to the melodies and harmonic movement. Although the magnificent orchestra powered through the hall when necessary, it was still possible to hear violin soloist Susie Thierbach soaring above the orchestra as a single instrumental voice.

Guest vocal soloists on the program were sopranos Juliet Pertus and Josefien Stoppenlenburg; tenor Steven Soph; and bass-baritone Dashon Burton. All are superb singers and well-matched for the tasks at hand. Very, very occasionally the female soloists were slightly overpowered in a few sections with heavy orchestral backgrounds, but the fluidity and nimbleness of their voices were never lost. Both Soph and Burton possess strong and resonant voices, yet were never lugubrious. Burton adds a strong foundation to any sort of ensemble; we heard to little of his magnificent voice (simply due to the needs of the repertoire), but we hope he will return to St. Louis soon for future performances.

The Mass in C Minor is a complex work, rather like a tapestry of countless strands woven together by Mozart. It is a work of reverence, drama and awe, yet it also carries an air of inner tension (perhaps foreshadowing Mozart's own questioning of faith and power in later life) and even of mystery. Only a genius could bring together such diverse qualities into a masterful whole. Those who are not immediately drawn to the music of Mozart may find that this enormous work provides much to ponder, and may come to see the composer (who wrote this piece while still in his twenties) in a different light. This is music that not only entertains, but challenges our brains as well.

The next performance by the Bach Society of St. Louis will be the Christmas Candlelight Concert held at Powell Hall on December 22.