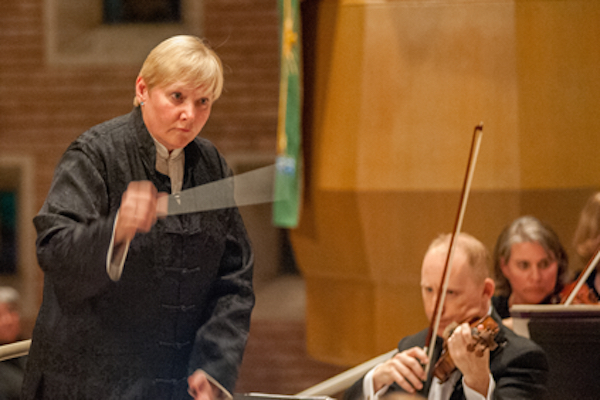 Music makes history come alive. The November 6 performance of the Metropolitan Orchestra of Saint Louis presented three works by composers who all shared common Germanic roots but who collectively portrayed a panorama of the evolution of thought and culture. Once again we see the value of music and the arts as both a reflection and sculptor of humanity.

Throughout his career, Franz Joseph Haydn (1732-1809) worked in the service of the nobility and the church. His station did not prevent him from achieving international fame, but his style of composition was influenced by the formal elegance and austerity of the Classical period. Deeply creative, he nevertheless adhered to the rules of systematic composition laid down by the European traditions of harmony and form. His Sinfonia Concertante in B-flat Major for violin, cello, oboe and bassoon was written during his triumphant tour of London in the 1790s. The work is a well-crafted showcase for the contrasting capacities of each instrument. Hearing two woodwind instruments juxtaposed against two string instruments demonstrates the beauty of each family of instruments.

MOSL players Ann Homann, oboe; Donita Bauer, bassoon; Cathie Lehr Ramos, cello; and Marilyn Park Ellington, violin, joined forces as a quartet of soloists. Together, they formed a tight, solid group of able performers. They seemed united in their conceptual approach to phrasing and dynamics, and all displayed well-honed technical command. Once again, the orchestra, led by Music Director Wendy Lea, provided a firm backup without overpowering the quartet.

The Sinfonia Concertante was composed during the period of the French Revolution, whose course and aftermath changed the course of European history forever. Scarcely twenty years later, Ludwig van Beethoven penned his Symphony No. 8 in F Major in 1812. Yet this ebullient work marks an amazing departure from the style of Haydn. The Eighth Symphony shows Beethoven at his jolliest and most uninhibited best; the melodies seem to fly about the hall as they are chased by the instruments of the orchestra. The brass and percussion add constant emphasis and punctuation to the melodic lines. Unlike Haydn, it becomes clear that Beethoven is throwing off the old and declaring his independence. Whereas Haydn employs a formal and stylized elegance, Beethoven builds on the traditional framework of harmony and form to express his own uniqueness. The juxtaposition of these two works is an almost startling illustration of how quickly the tides of history can alter a people and their tastes.

By 1870 the Classical period in music had long given way to the Romantic era, ignited by the fire of Beethoven and characterized by increasing individualism and a willingness to explore new styles. It was then that Richard Wagner composed his Siegfried Idyll, the opening work on this program, for his lover Cosima von Bulow. In marked contrast to the Haydn and Beethoven pieces, it is a meandering work of tremendous inner contemplation, dreamlike in character. The listener feels like a wanderer in a mythic forest created from Wagner's own poetic and fertile imagination. Some have argued that the work is repetitive and perhaps too long, but the melodies are hauntingly beautiful, filled with the sounds of bird calls, wind and running water. Listening to the three works on this program, one can hear a succession from the more impersonal style of the 1700s to the deeply personal style of the 1800s and beyond. Each composition is beautiful and unique in its own way, yet each depicts a different time, viewpoint and way of life.

Conductor Wendy Lea continues her fine work as Music Director of the Metropolitan Orchestra. Over time, listeners have come to see the various sections of the orchestra develop a refined sheen under her guidance and that of Conductor Laureate Allen Carl Larson. The woodwind section stood out in particular with its crystal clear intonation and bright flowing tone. The brass and percussion sections of the orchestra play with a youthful exuberance that occasionally overpowers the other sections, but yet in so doing enriches the excitement and stimulation of the live performance. As the largest section, and the very essence of what defines an orchestra, the strings face a special challenge. Although there were a few intonation problems at the beginning of the program, the MOSL strings have likewise shown an increasing confidence and unity in their performance. Without doubt, audiences will continue to support and clamor for this fine ensemble.