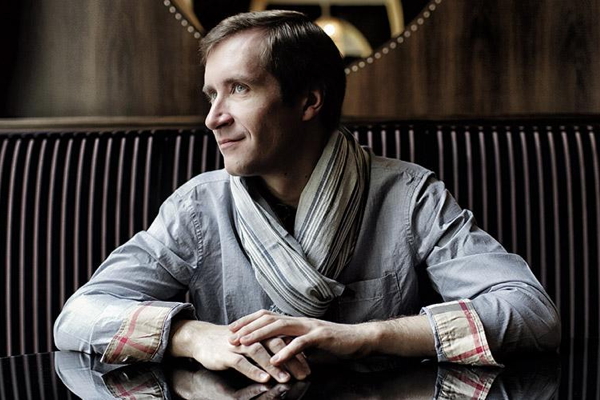 Nearly all of the longer than usual St. Louis Symphony program this past weekend (April 22 and 23) consisted of two big early-twentieth-century concerti, one for a single virtuoso and one for an orchestra full of them. Happily, both were on hand at Powell Hall.

The first major event was Rachmaninoff's Piano Concerto No. 3 in D Minor, Op. 30, from 1909. Known as "Rach 3" to its friends, of whom I am one, is widely regarded as one of the most challenging concerti out there. Fiercely difficult, it's a reminder of what a superhuman pianist Rachmaninoff was. For many years after its premiere, its only real advocate was the composer himself.

Here in Mound City there has been no shortage of great Rach 3's over the past few years, including a real stunner by Steven Hough and Peter Oundjian in 2012. The soloist this time was the remarkably talented Russian pianist Nikolai Lugansky, who recorded all four of the Rachmaninoff concerti in the early 2000's and whose CD of Rachmaninoff piano sonatas copped multiple awards.

He clearly knows this material well, and it showed in the easy familiarity with which he approached the music. He and guest conductor John Storgårds took an expansive view of the concerto that highlighted the strong differences among its many moods. In the opening movement, for example, the brisk and authoritative opening stood in sharp contrast to the more lush treatment of the second theme group, while the titanic cadenza had all the flash and power you could ask for.

The second movement was extraordinarily passionate, and the finale raced ahead at breakneck speed to its power chord code, capped with the composer's characteristic four-note signature ("Rach-man-in-OFF"). Done properly, this never fails to get a standing ovation -- which is exactly what happened when we saw the concert Saturday night.

It was a superlative performance, marred only by what sometimes seemed to be a less than ideal balance between the soloist and orchestra, with Mr. Lugansky sometimes swamped by the ensemble. The work that he played as an encore, on the other hand -- Rachmaninoff's Prelude in G-sharp minor, Op. 32 No. 12 --was crystalline perfection.

Let's turn now to that piece that needs an orchestra full of Nikolai Luganskys: Béla Bartók's Concerto for Orchestra. Commissioned by the Boston Symphony Orchestra's famed music director Serge Koussevitzky in 1943 when the composer's finances and health were both bottoming out, the composition process worked like a tonic. Bartók threw himself into the project and the final result has been part of the core orchestral repertoire ever since.

The work's title refers to the fact that throughout the piece individual groups of instruments or even entire sections of the orchestra are given difficult, attention-grabbing passages which highlight them. This is most apparent in the "Giuoco delle coppie" ("Game of couples") second movement, in which the melody is tossed about among pairs of bassoons, oboes, clarinets, flutes, and trumpets, but there are neat little solos for trombone and oboe in the first movement and the strings get a real workout in the fiery finale. Pretty much every section gets a chance to join in the fun.

It's only fun if the orchestra and conductor are up to the task, of course -- which Mr. Storgårds and the band certainly were Saturday night. The second movement was both jaunty and whimsical, the third movement "Elegia" was piercingly intense, and the interjection, in the third movement "Intermezzo interotto" ("Interrupted Intermezzo"), of a theme from the Shostakovich Seventh Symphony (which Bartók heard in a live broadcast while composing the "Concerto") was comically precise. The opening movement had all the ominous drama one could hope for and the whirling finale built a tremendous head of steam and hurtled towards its conclusion, propelled by great slashing gestures from the podium.

This is, as René Spencer Saller writes in her program notes, a work that "boasts brisk contrasts and strange symmetries...a storehouse of stylistic touchstones: Bach fugues, peasant folk songs, angular tonal experiments, birdsong, night music." Mr. Storgårds let us hear all of that in a performance that allowed the music to breathe without sacrificing forward momentum. The players responded with some of the best work I have heard from them in some time. Every section was at the top of its game.

The concerts opened with a brief work for strings getting its local premiere: Valentin Silvestrov's haunting Hymne 2001. The delicate work is a beautiful piece of gossamer sonic filigree that uses silence -- or as much silence as one can get in a live orchestra hall, anyway -- as an important compositional tool. This is music that begins softly and ends with a prolonged hush. It is, in its own way, every bit as demanding as the far more massive Bartók in that all the lines are very exposed and the players need to be flawless. The SLSO strings proved that they were exactly that, with a performance of surpassing radiance.

Next at Powell Hall: David Robertson conducts the orchestra in two programs. On Friday, April 28, at 8 p.m. he'll conduct an evening of popular classics, including Tchaikovsky's Capprico Italien, the overture to Weber's Der Freischütz, and Walton's Crown Imperial march, along with James Stephenson's bass trombone concerto The Arch performed by the SLSO's own Gerard Pagano. On Saturday at 8 p.m. and Sunday at 3 p.m., April 29 and 30, Augustin Hadelich joins the orchestra for the Brahms Violin Concerto. Performances take place at Powell Hall in Grand Center.