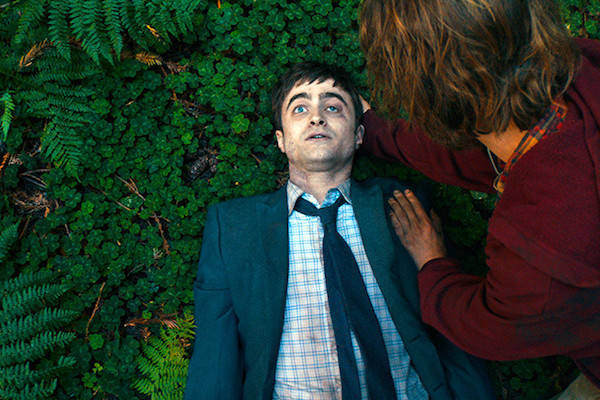 'Swiss Army Man' unlike any movie ever made

Swiss Army Man is unlike any movie ever made. Ever. It is the movie-theater of the absurd, not a new genre but a barely plumbed one. The film involves two men, one dead and one suicidal and lost, some dream women in magazines and suburbs, forests, swamps and gas, oh, my!

Let's tackle the flatulence first. See, Hank (aka Hanker Wanker) needs to find a way off an island. He picks suicide until he sees another human being on the beach. He discovers that humans emit excess gases post-mortem and uses the man called Manny as a Jetski to bubble blast through the waters. Trust me: it's funny in the way that flatulence always is.

The two men, each awakening in his own way, begin the struggle to survive in the woods, discovering the litter left behind and turning it into fantasies. Hank also uses the items as teaching tools to remind Manny of what life is like. That includes sex life when they gaze upon a bikini-clad woman in a magazine advertisement. Here's a teaching moment, too: Hank tries to explain to Manny why it's better not to discuss masturbation in polite society. Again, funny. Again, trust me. But then, the funny stops in this short, and the fantasies take over, and you begin to wonder, again, if the whole thing is made up.

Paul Dano works Hank's angles well, especially in the physical and vocal asides. Daniel Radcliffe, known unto his epigraph as Harry Potter, turns in a fine -- maybe the finest since Weekend at Bernie's --  portrayal of a dead man slowly returning to life -- or not. Mary Elizabeth Winstead plays the woman well.

The film is credited to the Daniels, that is, Daniel Kwan and Daniel Scheinert. They do not fear showing oddballyness in all its states, even in cheese balls. They created song lyrics here like, "Rescued. I thought I was rescued, but you're just a dead dude." Sing along. Swiss Army Man is solidly unpredictable.