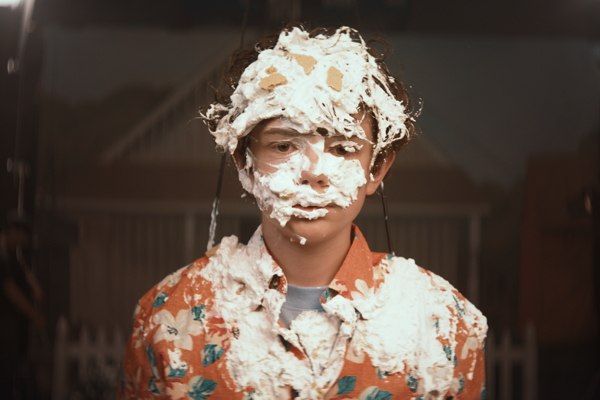 Late in “Honey Boy,” Otis' therapist says, “Everyone has a grudge, but you have to lay the grudge down or it will kill you.” Twelve-year-old Otis and twenty-two-year-old Otis personify this truth, and it's understandable exactly why. As a boy actor, Otis provides the paycheck for his anger-fueled, abusively critical father James, an ex-con and ex-rodeo clown.

The story alternates between Otis' early and later years, with expressionistic lighting interpreting dysfunctional emotional states. More heartbreaking is the roller coaster of a young Otis' need, even pleas, for love, answered with cruel outbursts from his father with gentle comfort only from one of the resident “ladies” at the shabby motel where they live. Still acting for his livelihood as a young adult, Otis gets sent to legislated rehab after an accident early in the film.

As the boy Otis, Noah Jupe gives an extraordinarily mature performance, his eyes communicating wells of sadness and pain. Cinematographer Natasha Braier, in an American Cinematographer article, notes that she lit scenes to highlight actors' eyes, even in dark scenes, to drive home emotions. But the spotlight here rests on Shia LeBoeuf, the courageous writer for this autobiographical story of his difficult childhood. In fact, he began the script when he was in rehab. Add to that LeBoeuf playing his father's role. Reality and fiction converge in a decidedly unnerving way.

The superb Lucas Hedges plays Otis in his twenties, suffering from, family-induced PTSD, not yet capable of escaping the catastrophic fallout of his disastrous upbringing leaving him vulnerable and thrashing about emotionally. Laura San Giacomo as his therapist calmly pushes him to heal, showing the formidable hurdles.

In her feature narrative debut, director Alma H'arel doesn't flinch from a straightforward depiction of the cruelty inflicted. Certainly, in constructive or destructive ways, everyone strives to come to terms with their upbringing. “Honey Boy” may well help in the effort. As the counselor says, “A seed has to destroy itself to become a flower.” At several cinemas; check listings.