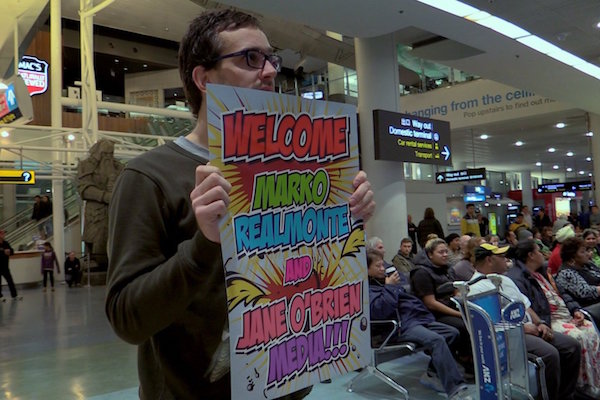 'Tickled' offers much more than a great laugh

Eager to pursue this potentially tantalizing subject, Farrier began, as usual, making online inquiries which led to a website listed as Jane O'Brien media. After Farrier's further research, the story becomes really bizarre. Two American lawyers fly to New Zealand to confront Farrier and warn him to back off and drop his investigation. Farrier knew by now that he had a terrific topic worthy of this documentary film. Soon a complex investigation involves egotistical control, multilayered deception, lots of money with accompanying greed, revelations of retaliation involving crashing prestigious university web sites, serious threats against the lives of several people involved, surreptitious stalking, and, eventually the F.B.I.

I won't reveal more here because the unexpected revelations are too unpredictable and wonderful to spoil. At the Columbia, Missouri, True/False Film Festival where I first saw Tickled, Farrier spoke and answered questions after a packed screening. Legal developments subsequent to his and Reeve's finishing the film prevented him from discussing some aspects of the issues explored and the people exposed. Farrier did make clear, however, that individuals' lives were destroyed by powerful people manipulating the events documented.

To be sure, Tickled is often hilarious; but especially because it involves the internet, it is also a cautionary warning for what it reveals about what, at first blush, seems an innocent sport that some after easy money stumble into. The hidden truths go far beyond what anyone involved or the journalists inquiring expected. The debut film for writers/directors Farrier and Reeve, Tickled shows an impressive professional polish as it documents spellbinding events. It is easily one of the more entertaining films of the year. At Landmark's Tivoli Theatre.