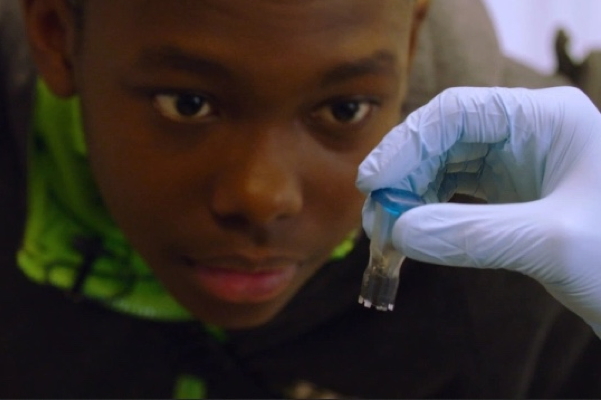 It is so gratifying and exciting when a documentary filmmaker takes a complex scientific subject and transforms it into an accessible and engaging presentation. That's exactly what director Adam Bolt does in "Human Nature," taking on the fascinating, gene splicing power of CRISPR, the acronym for "clustered regularly interspaced short palindromic repeats."

Elegant animation makes clearly visible and intellectually comprehensible the microscopic, genetic DNA manipulation that the tool CRISPR allows. Providing an historical context through archival black-and-white footage from October 1966, California Institute of Technology biologist Robert Sinsheimer notes that altering genes is a "promise equally for deliverance and disaster." The following six chapters of this film will elaborate on those two poles of this scientific discovery.

Summarized and explained, experiments led to the successful exchange of RNA for one targeted gene in our DNA 9(consisting of more than three billion letters in the human code) and involved yogurt bacteria, viruses, and pigs. The revolution occurred steadily and quickly in historical terms. By chapter 4, "Brave New World" and the following two chapters, "Good Genes" and "Playing God," the bio-optimists and the bio-pessimists debate the potential to make life better as well as the dangers directing evolution and promoting eugenics, as a 1937 Nazi propaganda film, 1980 sterilization examples, the 1997 film "Gattaca" and the 1993 "Jurassic Park" reveal. Should we be altered to live on four hours sleep? Should soldiers be designed to fight without fear? Should designer babies be offered? What about structuring immunity to HIV? Should we pursue ageing reversal?

As Harvard Medical School geneticist George Church notes, his lab has been accused of turning science fiction into science fact. It becomes increasingly clear that, as numerous examples corroborate, the relationship between genes and our environment is incredibly complex; for example, the sickle gene protects against malaria, one gene 40,000 times smaller than a human hair causes hemophilia, molecular RNA can match a destructive invader, find a unique DNA sequence, and cut and destroy the virus.