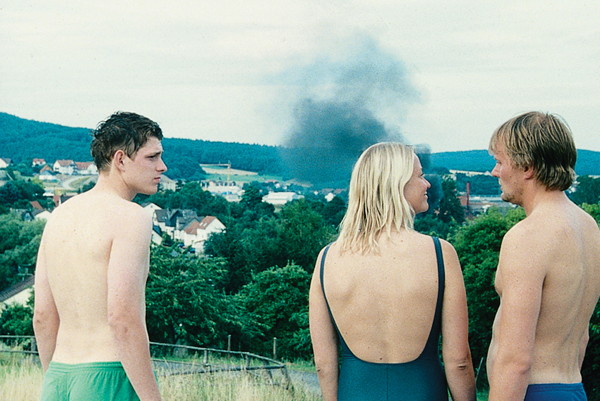 ‘Bungalow’ studies and wallows in a listless, shallow 19-year old

It’s certainly difficult to make an engaging film about aimless, shallow people, and German director Ulrich Köhler hasn’t. Witness nineteen-year-old Paul in “Bungalow.” In opening scenes he goes AWOL from his German army unit, apparently on a whim. For the remainder of the film, at his parents’ bungalow (of the title), he meanders, swims, lounges, lies, and dodges the army MPs.

His previous girlfriend Kerstin has lost interest, and it’s easy to see why. He repeatedly spies on his brother Max and Max’s attractive, blond girlfriend Lene, whom he lusts after. In fact, his only aim in life is to seduce Lene, an aspiring Danish actress, who teases and leads him on. He fights with his brother, steals a car, dodges military police again, and has a couple beers. Besides that, Paul has no general ambition or specific goals. He’s on a road to nowhere, apparently embodying a film character Lene describes for a role she’s been promised. Lene says, “I’m an extraterrestrial who doesn’t understand anything. I have hardly any lines.” Neither do the characters here. Aptly summarizing this film, Lene says (in another context), “It was a bit more than nothing.”

Several brief scenes involving sex have no more energy than the listless, occasionally combative, Paul. All his wandering unfolds against a political backdrop of which we learn little: an unexpected explosion, comments about compulsory National Service, and the general lack of purpose for these disengaged individuals. To be fair, the film, originally made in 2002, does effectively capture the ennui of young adults for whom goals are, apparently, unimaginable or out of reach in this society at this time. The actors convey that, perhaps only too well.

At 86 minutes, the character study is unified and coherent. The cinematography often establishes the claustrophobia Paul feels, and the sound refuses to offer any escape as well.  The winner of several awards, though its merits elude me, “Bungalow” streams on the Grasshopper Films website with a link to Webster University’s film series. For more information: Webster.edu/filmseries.