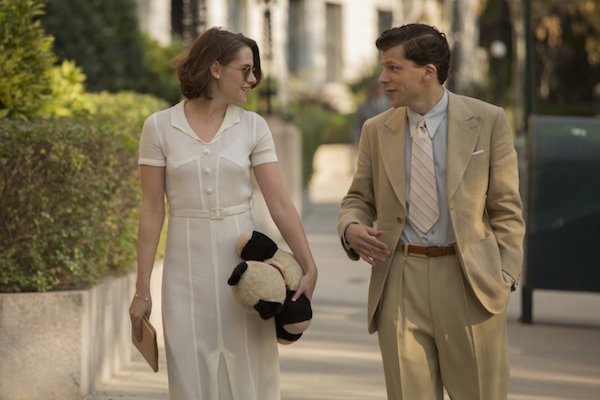 Woody Allen long ago gave up making movies with heart and soul. His latest titles have not even had the plink-plink-plink of "Heart and Soul," played in duet on the piano. Café Society does not even exploit the vintage appeal of costumes or history. There's only Vitalis underneath that top hat.

Jesse Eisenberg plays Bobby, the Allen character, right down to the stutter of the sentence and flutter of the hands. Does Allen train actors to play him, or do they come to the audition with their best Allen impersonation? Either way, it's disconcerting. Bobby hails from the Bronx, but he wants to make it big in Hollywood. Luckily, his uncle Phil, played by Steve Carell, is a big-wig agent in Hollywood, so Bobby finally finds work with him. He also finds love with Phil's secretary. Vonnie, played by barely-there Kristen Stewart, is more than that to Phil -- we know this, but Bobby doesn't.

Bereft Bobby returns to New York, where he goes to work for his Mafia-connected big brother to run a night club. These cafe society scenes should flashlight the way back to Manhattan in the Thirties, when life was more glamorous for the rich. This sort of return to vintage New York is what Allen has become known for, what that signature jazz sound that introduces the credits on his signature black screen is all about. Here is where the production under the direction of Santo Loquasto should elicit sighs for a time gone by. It does not. Neither does Vittorio Storaro's cinematography. The pros are just phoning it in on this one, and that includes the supporting actors, such as Parker Posey and Blake Lively, who fill Allen's stages.

Without a center, Café Society becomes a photo album with no device to pull these magnetic filings toward the middle. Once more with feeling, please. At various locations.